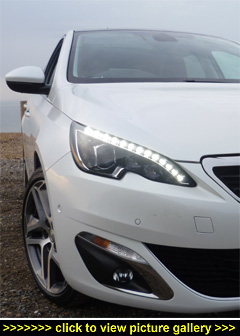 “While you’d expect, say, a cutting-
edge hybrid to come with a futuristic
dash, it’s the new-generation 308 —
brand new from the floor up — that
provides one...”

Down the sides two things stand out — the close-to-the-'corners' 18-inch alloy wheels and the upscale finishing chrome surround edging the glasshouse. Reach the tail and there are more LED lamps, fashioned in a smart and conspicuous 'claw' design, along with the characteristic Peugeot triangular rear quarter panels. This is a hatch that invites a second look…


Settle back into the driver's seat and you'll wonder where all the switches and knobs that clutter up the traditional car dash have gone. They've not so much disappeared as been migrated to a new onboard digital world: now, like your smart phone, you tap or flick a fingertip over the 308's large (9.7-inch) central touchscreen (with sharp high-resolution graphics) to operate just about everything apart from the lights, indicators and wipers which, for obvious reasons, remain on the column stalks.

Radical it may appear but it takes just a few minutes to absorb and attune to this brave new command and control system — simply finger-tap your choice from the large self-explanatory icons to select the desired function for any of the following:

The menus work fluently and the navigation, in particular, is foolproof; setting a destination is a doddle, and along with perfect clarity and accurate spoken directions you get bird's-eye and junction views with the posted speed limits displayed on the map. All of which makes for stress-free travelling on both familiar and new routes.

Also likely to be new to both first-time and returning Peugeot drivers will be the 'head up' instrument arrangement — as on the new 2008, the dials and digital speed readout are viewed over the top of the compact three-spoke wheel's rim instead of through it. Try it; you'll like it. Plus it keeps your eyes where they should be — taking in the road and traffic ahead.

As you might expect, there's an electric parking brake — not only is it quiet (some make quite a racket) but better than that, it's one you can order to automatically apply and release itself. And, to paraphrase Google: "People who liked this also liked…" the Park Assist system, which will manoeuvre your 308 perfectly into the tightest gap, either nose-to-tail or side-by-side. Okay, so the world's not quite up to speed with self-drive cars like Will Smith's Audi in the dystopian sci-fi thriller I, Robot — but, like it or not, we're already headed down that road.

The physical, as opposed to mental, elements of the cabin are also fine — however, while the Feline trim level might be the range-topper, that still doesn't get you Nappa leather upholstery. For that you need to pay an extra Ł1,200 but, Hey!, that also gets you a pair of heated front seats with a massage function. The standard part-Alcantara seat 'skins' are perfectly okay, but considering the pleasure to be had for that extra Ł1,200 it's likely to be one of the most ticked option boxes.

Adding another dimension to the 308's interior is a panoramic glass roof that stretches all the way back to the rear headrests and floods the cabin with light — unless you prefer to keep the one-shot power-operated sunblind closed.

Space-wise this new 308 will carry five, and up front all is fine and dandy with smartly finished, well-shaped and supportive seats with decent side bolstering. There's a fist of headroom, masses of elbow and shoulder room and excellent under-thigh support so even big people will be comfy.

The driver also enjoys power-adjustable lumbar support; front passengers adjust theirs manually. A polished alloy gear knob crowns the short gear lever and is close to the wheel and your left hand, while a comfortably-angled rest is there for your left foot when in cruise control mode.

The wide-opening rear doors provide easy access and two adults can be very comfortable indeed sitting either side of the wide, nicely-cushioned, drop-down central armrest with its pair of built-in cupholders. The side windows are large, long and deep and headroom is not an issue. Knee room is fine plus there's lots of room for feet. And the good-sized door bins are for real-life use, not just show. Teenagers and youngsters will be well accommodated, even if they number three. All passengers will also be sure to appreciate the benefits — summer drinks-wise — of the 12-litre cooled glovebox.

Given its compact 4.25m length, Peugeot have fitted in a surprisingly large boot: 470 litres. Fold down the 60:40-split back seats and you have a very useful, intrusion-free loadbay that will take 1,309 litres. The tailgate opens high (an easy rise, as it's now made of weight-saving composite thermoplastic), the load sill is low and access is through a wide rectangular opening. A ski-hatch boosts versatility.

Those 308 owners looking for some decent get-up-and-go from this latest Peugeot hatch will have their eye on the turboed petrol-drinking 1.6-litre THP 156. That last number refers to 156bhp, and it's accompanied by a beefy 177lb ft of torque from 1,400rpm.

The 1.6 engine, like the vast majority of today's cars, puts its power down through the front wheels via a six-speed manual 'box. Not only is the 308's mechanical heart eager, but it's no longer handicapped by a heavy body — this latest-generation 308 is 140kg lighter than the superseded model. This improves not only performance and mpg (as well as reducing emissions) but also helps contribute to sharper handling.

Adding to the fun is the downsized but not too dinky (351 x 329mm), flat-bottomed, Nappa-wrapped helm which, by the way, we all liked because, as you'd correctly suppose, it quickens up the steering and provides better feedback to make the car feel nimble and suitably wieldy in your hands.

Of course it helps that the new platform's suspension, handling and grip are good enough for some 'game on' driving — do so and you'll find that the easy-to-place 308 handles keenly and rides flat, its cornering ability made more usable by tidy turn-in.

It's a satisfying pairing with the 156bhp four-pot because when you need power it's there, delivering plenty of shove at both low revs and mid-range for safe overtaking; there's even a fair bit left as the red-and-chrome needle closes on the red-line. It's flexible too: if you catch yourself tootling along at 40mph in 6th it won't grumble.

And it delivers all this with a complaint and generally comfortable ride (even on the 18-inch alloys it's not really troubled by bumps) and along with an agreeable ambience the cabin is quiet and refined under way.

Diesels also make a strong showing with 1.6 and 2.0-litre capacity engines as well as a new super-lean, super-clean 120bhp 1.6 BlueHDi model that emits just 82g/km and is said to be good for 91.1mpg economy (making it one of the most fuel-efficient cars in the real world) and which will, deservedly, be loved by green-blooded motorists. Those with red blood will be sticking with the 156bhp 1.6. And both will be smiling.

This 156bhp version is not one of the French marque's famous GTi hot hatches — one will no doubt be along shortly — but even so the driving dynamics are good enough for you to have some plaisir behind the wheel.

Anything else? Oh, I don't believe I mentioned that the new 308 is the 2014 European Car of the Year. No need to bang the drum — just drive one yourself and you'll see why the 308, like Peugeot's classy new 2008, is a big hit with drivers. Sales have been buoyant from the off, helped by prices starting at just Ł14,495.

Smartly styled with a contemporary, well-fettled cabin supplemented by a family-size boot and versatile load area, and seasoned with a sprinkle of Gallic charm that the French do so charmingly, this new Peugeot makes a very desirable family hatch. Vive la 308! — MotorBar