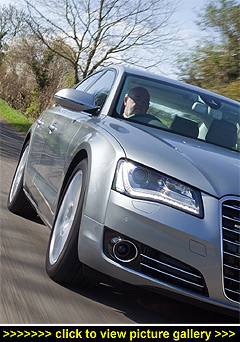 “The new high-tech A8 luxury saloon
— it could be your guardian angel.
Unfortunately, even before it goes on
sale in the UK, this year’s allocation
is already sold out...”

THE TECHNOLOGY SHOWCASE that is the new Audi A8 saloon, with prices starting from Ł54,835, is available with standard and long wheelbase options and a host of engine choices when the range is complete. It has two trim levels: SE; and SE Executive, which adds a further Ł2,250 to the price.

But with other added-cost options it will not be unusual to find some A8 customers spending up to Ł95,000 on their model of choice. Around 60 per cent of UK customers will choose SE versions and this year the standard length car will be the main seller. Next year (2011) the LWB will become the highest selling versions with 60 per cent of sales once the full range of engines and transmissions become available.

The A8 launches with enhanced 4.2-litre FSI petrol (366bhp/328lb ft) and 4.2-litre TDI diesel (345bhp/590lb ft) engines combining power and torque increases with economy improvements of up to 19 per cent. The main-selling (85%) 3.0-litre TDI (246bhp/405lb ft) unit to follow for September deliveries offers a 22 per cent mpg boost to a class-leading 42.8mpg and 174g/km CO2. This engine has the automatic Start/Stop function as standard. Audi says there is approximately a 20 per cent reduction in CO2 emissions across the engine range compared to the current A8 — this reduction lowers road tax costs, Benefit-in-Kind and P11D tax implications for business and user-chooser customers.

A new eight-speed tiptronic automatic transmission, the latest generation quattro all-wheel-drive and adaptive air suspension are all standard across the new range. All models feature energy recuperation technology plus the all-new A8's space-frame construction aluminium bodyshell is 24 per cent stiffer than the previous version and 6.5kg lighter.

The latest satellite navigation system now includes the MMI Touch in-car infotainment system. As an option, there is a touch-pad linked to this system where the driver can write a start-letter of the destination and the SatNav then works it out from there.

As the transmission now 'talks' to this system, the navigation element influences what gear the car should be in as the driver makes his or her way along any road in the UK or Europe.

Whether you are a wealthy retail customer, a business person who drives the car sometimes (but at other times lets the chauffeur take the wheel), or if you are a company specialising in VIP chauffeuring, the Audi A8 has to be high on the list of choices. The BMW 7 Series, Mercedes S-Class, new Jaguar XJ or even the Lexus LS are competitors but the technology tour-de-force A8 is already sold out for this year in the UK and only around 1,000 units will be available next year, so it will remain very exclusive.

After a couple of days driving Audi's new super-saloon on the winding and hilly roads of the South of France, I could not fail to be impressed by the technical sophistication this car offers or by its build quality or indeed by its performance. Cars like this do not often get driven very hard over narrow, twisty mountainous roads, more often wafting along motorways or from business to business meetings or to work and back in towns and cities. The fact that such a large car coped so well — and safely — with conditions outside its normal environment is testimony to Audi's supreme skill of developing new models for all conditions.

It could be claimed that for the working theatre the A8 doesn't need to be so technically advanced or so capable. The truth is that most owners want, and expect, the latest in technology — whether they use it or not. If they are buying the Audi A8 saloon flagship then it has to have the ultimate specification.

Whilst under its aluminium skin and space-frame skeleton construction the A8 is state-of-the-art, visually it is styled in a conservative manner. It is expensive, but it doesn't shout the fact and many owners will like that — not showing off their wealth to others, especially given the current economic climate.

During the test driving the main-selling 3.0-litre TDI 246bhp turbodiesel engine was not available as it arrives in September but the 4.2-litre FSI 366bhp/328lb ft petrol and 4.2-litre TDI diesel 345bhp/590lb ft units were.

Both have power and torque increases over the previous units used in the past A8 and both units show improvements of up to 19 per cent in economy with lower CO2 emissions. The petrol unit will be a minority seller, accounting for just 2 per cent of sales, while the 4.2-litre TDI will account for 13 per cent of registrations.

Most impressive was this 4.2 diesel unit. Its huge torque of 590lb ft (from 1,750rpm) gives it immense response and it doesn't sound at all like a diesel; very little noise inside or out. Coupled with the silky-smooth, new eight-speed automatic transmission, this is a match made in heaven and the all-wheel drive quattro grip was typically sure-footed and didn't sap the power in the slightest.

The driver can select the automatic air suspension mode — in fact, the auto setting did its job really well. Although the electronic power steering gives little feel, it is nicely weighted and adjusts to the travelling speed pretty well.

Given that the new A8 is a luxury cruiser, it handles the rough as well as the smooth with relative ease. Inside, the A8 has impeccable style and luxurious build quality. There is a classy ambience with expensive materials and high-tech features.

The standard wheelbase version is not that roomy in the rear for legroom so if you are the type to be chauffeured then go for the longer version. Otherwise the new A8 is a technology masterpiece packed with safety support systems that also represents refined, luxury motoring at its best with supreme build quality. Not only will Audi exceed one million sales this year, but it is the number one premium brand in Western Europe ahead of BMW, Mercedes-Benz and Jaguar. — David Miles