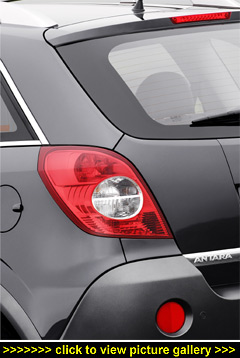 “In 2010, one in ten new cars sold
in the UK was an SUV, which bodes
well for Vauxhall’s significantly
refreshed Antara range...”

GENERAL MOTORS HAVE JUST STARTED their programme of European press launches for the Vauxhall/Opel Antara range in what was this week 'snowy Scotland'. It is apt that European journalists will be visiting Great Britain and, in particular, Scotland as the UK is GM's biggest single market in Europe; Vauxhall sells more new cars in Scotland than any other brand — 27,000 last year and that's 7,000 ahead of Ford.

Another reason for Vauxhall's confidence that 'new Antara' will outsell 'old Antara' is that this generation offers a two-wheel drive-only model which could take up to 35% of sales due to its lower CO2 emissions and its lower starting price of Ł19,995, around Ł2,500 less than the starter price of the outgoing Antara models. Most models in the new range are cheaper than their previous equivalent version despite the increase in VAT. 4WD Antara models are priced from Ł22,345 to Ł25,455 and there is a Ł1,460 six-speed automatic transmission option for both engines on 4x4 models.

Two trim and equipment levels are available: Exclusiv (which will take 85% of sales) and SE. For the UK market there is one all-new 2.2-litre turbodiesel engine on offer but it is available with two power outputs. Around 85% of Antara customers in the UK will choose the 160bhp unit used for both 2WD and 4WD models. Top performance option is the 181bhp unit for 4WD only models.

The all-new four-cylinder direct injection common rail turbodiesel engine has CO2 emissions ranging from 167g/km for the FWD variant to 175g/km for 4WD manual versions and up to a not-insignificant 205g/km for the automatic models. For company car drivers Benefit-in-Kind tax levels range from 25% to 27% for manual versions and 33% for automatic gearbox models. However, Vauxhall say that the Antara will remain a 90% retail proposition. First Year rate VED road tax charges are Ł250 for manual transmission models and Ł550 for automatics.

The platform has been revised, especially in the suspension department, with new settings to give it higher body roll stiffness with a more direct response steering meaning better balance and better stability. The ride is set up for comfort rather than ultra sharp handling but for most 'real' customers this is better than having very firm and harsh ride characteristics.

The 4WD versions have an electronically-controlled drive distribution system whereby conventional front-wheel drive is in use most of the time but all-wheel drive grip is selected automatically when needed. It would be better, and in keeping with some other good SUVs of this size, to have a 4WD lock function where all four wheels can be locked to provide permanent drive in tough conditions. Better to be pre-emptive than reactive, I always feel.

In most respects the new 2.2-litre turbodiesel engine is first class. It's much quieter with less 'rattle' than many current GM/Vauxhall/Opel diesel units and, thankfully, this new unit is the forerunner to other new diesel units to come for other models. The installation in the Antara is first class and noise intrusion and vibrations into the vehicle have almost been eliminated. Two new six-speed transmissions, manual and automatic, complete a very good drivetrain package.

I was able to drive the 160bhp, 258lb ft version of this new engine in the two-wheel drive model priced at Ł19,995. Around one third of customers choosing a new Antara are likely to go for this 'crossover' model. Officially, it returns 44.8mpg. On test, and driven only on-road, the economy was a very good 44.2mpg. The engine felt strong, responsive and very quiet — all very positive. The CO2 emissions could be lower given what the latest 2WD SUVs and crossovers are capable of — the 160bhp model's 167g/km means Ł250 in road tax for the first year and then Ł180 for the second year onwards.

This version of the new engine will be the main seller but with the 4WD option. With 4WD the official fuel economy drops to 42.8mpg and the emissions creep up to 175g/km but the road tax costs remain the same. Regrettably there were no models of this specification for us to try at the European press launch but I can see why it will be the main seller in the UK — with Exclusive trim and equipment it costs a very competitive Ł22,345 with a manual gearbox and Ł1,460 more if the auto 'box is chosen. Good as it is, I wouldn't go the auto route because of the higher emissions and the accompanying much higher road tax bill.

A big seller in Europe will be the 181bhp, 295lb ft version of the same 2.2-litre engine with 4WD. I drove this unit with both manual and automatic gearboxes. The engine is really strong and responsive more or less right through the range.

Both transmissions are claimed to return 42.8mpg. On test, the manual model returned 42.4mpg and the auto a poor 27.6mpg but that did include some light forest track driving. First year road tax for the manual is again Ł250 and Ł180 for following years. However the auto blows the budget with a Ł550 first year road tax reducing to Ł245 for the second year onwards.

The new Antara, in whatever form, is a much improved vehicle to drive. It looks better too, combining chunky, purposeful styling with a sleek coupe side profile. For safety and impact requirements it has a high belt line and bonnet but it doesn't look cumbersome — very neat, in fact.

The interior has been vastly improved as well. Built in South Korea, perhaps some of the plastics are not as plush as the best of the European SUVs but they look durable. Specification is high even for the best-selling Exclusiv versions.

Overall the new Vauxhall Antara is a vastly improved package — and competitively priced. Plus points include the new engine and transmissions, competitive pricing, high equipment levels, comfortable ride and smart new looks. And it 'crosses over' nicely between an SUV and a Crossover with two- or four-wheel drive model availability.

Against that there's just a couple of things: higher emissions than some of the latest vehicles in this sector so higher running costs, and the handling's not the sharpest in its class. But with more people returning to SUV and crossover ownership, it's a very competitive addition to Vauxhall's much improved model line-up. — David Miles