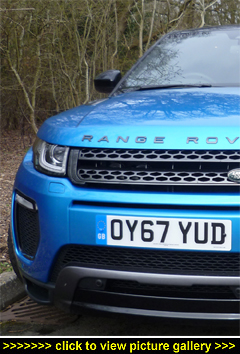 “Even if your budget falls far short
of the Ł80K needed to join the full-size
Range Rover club there’s absolutely
no ‘entry level’ stigma in buying an
Evoque, whose prices kick off from
just Ł31K...”

WHILE SOME MIGHT SEE the Evoque as a cut-price Range Rover for fashionistas, its DNA is undiluted Range Rover — and a lot of its big brother's tech and capability is incorporated into Land Rover's compact sports utility vehicle.

Defined by modish styling, the Evoque continues to turn heads seven years after it was first introduced. Suffice to say that if they rewrote Cinderella today the Fairy Godmother wouldn't be crafting a carriage out of a pumpkin — No, Sir, she'd just waggle her wand and conjure up an Evoque, one finished in the same eye-catching luminescent Moraine Blue paintwork of the TD4 we've been driving this week.

Other body styling touches that boost the Landmark model's standout looks include the contrasting Carpathian Grey colour of the sloping glasshouse roof, dark satin brushed aluminium trim, Graphite-finish louvres on the clamshell bonnet and fender vents, plus a set of smart wheelarch-filling 19-inch gloss dark grey 7-split-spoke alloy wheels. So, get used to those approving stares…

Decidedly more rakish to the eye than other premium-badged rivals from Audi, BMW and Mercedes that, while well tailored are much more conservatively attired, the Evoque's appeal continues on the inside with a sumptuous and well-specced cabin.

You feel great the moment you're aboard the Evoque; the well-padded, three-stage heated and nicely-bolstered seats, upholstered in quality perforated leather, look inviting and prove cosseting, particularly on extended trips where they provide fine long-distance comfort — it helps that they are power adjustable, depending on spec, twelve to eighteen ways. And you not only ride tall but you sit high and enjoy a commanding view of the road with a fist of headroom above you.

The shallow-looking side windows aren't anywhere near as restrictive as they look from outside, and even the view back through the rear screen (capped, as it is, by a broad top spoiler) doesn't complicate parking — for the record, front and rear parking sensors are standard. A panoramic glass roof floods the interior with light — unless you prefer to keep the one-shot powered 'blackout' sunblind closed.

Perhaps the most appreciated Range-Roverish quality of the Evoque is its refinement — whether you're off to the superstore or driving hundred of miles to your holiday destination, the Evoque's cabin is always tranquil; the TD4's turbodiesel soundtrack is mostly inaudible, with road noise equally muted.

A quartet of adults won't have any problems fitting in the 4.4-metre-long Evoque, and there's no shortage of in-cabin storage with ample cubbies, dual-usage cupholders and accommodating door bins and large glovebox for all that personal 'stuff'.

The dials are smart and clear with a multi-function driver's computer between them that, amongst other core information, features a digital speed readout (supported by posted speed limit signs on the mapping); switchgear is clearly marked and there's a satisfying 'engineered' feel to the column stalks and chunky rotary controls. In fact all the switchgear is refreshingly logical and sited exactly where you'd expect to find it; and all easy and tactile to use.

As too is the multifunction leather-wrapped and heated steering wheel with its inimitable Land Rover boss with paddle-shifters on the horizontal spokes and easy to identify and remember buttons.

Trim and finishing is decidedly upscale with the classy materials and fit and finish expected of a Range Rover, enhanced by modish touches such as the rotary gear selector knob that rises out of the wide central tunnel when you thumb the keyless Start Engine button and the proximity sensing activation for the overhead cabin lights — very handy at night when you can't see a switch until you turn on a light! Indeed, you can pay far more than what an Evoque costs and still not get a cockpit that is anywhere near as appealing.

The infotainment and navigation is managed via a large 10-inch central touchscreen (8-inch is standard but the 10-incher comes with the Navigation Pro/Touch Pro upgrade).

All you really need to know is that it's intuitive to use with first-class HD graphics that, combined with plenty of apps and smartphone linkage, will keep you as connected and informed as you wish to be. And, of course, there are ample power, HDMI, USB and SIM sockets. Plus roadside assistance and SOS emergency call buttons above the auto-dimming rearview mirror alongside the drop-down glasses case.

The optional Dual View feature lets your front passenger pass the journey watching a DVD on the main screen while you're kept informed of whatever infotainment or navigation data you need. Audiophiles, wherever they're sitting, can immerse themselves in the sound-fest emanating from the optional 16-speaker 825W Meridian sound system.

It may not be as large as a Range Rover or Range Rover Sport but the Evoque's rear passengers won't be crying in their beers because, despite that low-slung roof, headroom is still good — there's a fist of it, actually — and there's no sense of being hemmed in when you're relaxed in the back cabin thanks to that panoramic roof keeping it all light and airy.

Backrest angles are relaxingly comfortable and there's no problem finding space for your feet and knees. A drop-down centre armrest offers a lidded tray along with built-in cupholders plus there are also well-sited outer armrests, stretchy magazine pouches on the front seatbacks and large door bins. Rear passengers also get their own air vents for the climate control and enjoy decent views out, both to the sides and the front.

And while two in the back is undeniably best, three side-by-side is more than doable. For most Evoque owners, however, the back cabin will be for shopping overspill or ferrying the kids — although sub-six-footers of any age won't have any complaints.

Married to a nine-speed autobox the 177bhp/317lb ft TD4 2.0-litre Jaguar Land Rover Ingenium diesel is agreeably smooth to drive. If you feel the need to go fully hands-on then there's a manual mode with paddle-shifters. It's a competent and quiet unit, this TD4, and well matched to the nine-speeder: pulling away is always fluent; and short around-the-houses runs are as relaxing as long trips are tireless. Better still, it's more than willing to drop down to the most appropriate ratios on twisty blacktop.

And it's as quick as you'll need, getting the Evoque off the line to 62mph in 9 seconds dead with a top speed of 121mph. Go for the TD4 — as most buyers do — and not only won't you have any trouble keeping up with the quicker traffic and passing the slowcoaches with safe ease, but you'll benefit at the pumps. Officially the four-wheel drive TD4 returns 55.4mpg — in real-life our hard-driven Evoque managed a not-to-be-sneezed-at 47.2mpg.

Buy one of Land Rover's premium line-up and you'll have bought yourself a first-class ticket to ride — the Evoque's suspension does a respectable job of isolating all aboard from the less than premium tarmac that today passes for normal in the UK and motorways are cruised nonchalantly. In point of fact Range Rover's smallest is an accomplished cruiser, underscoring two of its strongest cards: comfort and refinement.

In a nutshell the Evoque serves up an enjoyable driving experience, with precise, nicely weighted steering allied to quick turn-in. Point its nose into a corner and it's every inch the Range Rover as it cuts through feeling reassuringly composed and stable with body lean well managed (aided discreetly by torque vectoring by braking that enhances agility and stability). As a point-to-pointer it's a surprisingly quick car. And a well-fettled one too; twisty lanes are faced down with no fear thanks to a ride/handling repertoire that's as dynamically polished as you'd expect of its big brothers.

When the road changes from black to green or brown it's still business as usual for the Evoque. With Land Rover's DNA plus four-wheel drive, Hill Descent Control (gradually eases the car down a steep hill) and Terrain Response (a setting for every condition: Grass, Gravel, Snow, Mud, Ruts, and Sand), it's as confident off-road as it is on it and tackles challenging conditions competently — thanks to an approach angle of 23.2° (degrees), obstacle clearance of 211mm, a ramp breakover angle of 22°, and a 33° departure angle. It's nae frightened of a wee drop of the wet stuff either, being happy to wade through 500mm deep water.

The Evoque's hunkered-down looks enhance its compact footprint but, as its cabin proves, looks can be deceptive and there's more room inside than you expect. The boot too is a decent size — a regular-shaped 420 litres with the 60:40-split rear seats in use. Should you need to swap passengers for cargo capacity just drop the back seats and you'll have a 1,445-litre loadbay; the cargo area base is seamless, so it's an easy job sliding in bulkier items. And below the boot floor is an unlooked-for bonus: a usefully large storage bin. Alternatively you can tow — the torquey TD4 is gutsy enough to pull a braked 2,000kg.

While a powered tailgate is a big plus for convenience, the Evoque's 'gesture' version makes life even easier as even with your arms full just waggling your foot under the rear bumper will power-open (or close) the tailgate.

The smartest of the smaller SUV-set to be seen in, it's not just its Range Rover bloodline and eye-catching styling that makes the Evoque the one to drive but the combination of quality, comfort and competence both on and off the blacktop that sets it apart from all the others. ~ MotorBar