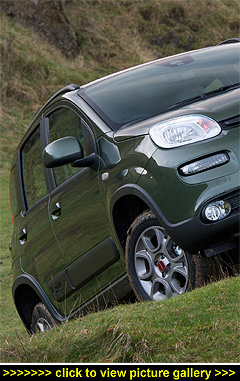 “Fiat has introduced two new
Pandas to the UK but both will be
quite rare on and off our streets:
the Panda 4x4 with permanent all-
wheel drive and the Panda
Trekking, a two-wheel drive
Traction+ version of the chunky
high ground clearance 4x4...”

FIAT SAY the Trekking is the world's first CUV or City Utility Vehicle. At the first media test drives, held in suitably snowy and icy conditions, Fiat's UK Product Manager Rob Lake said that with demand increasing in the UK for compact City Cars in 2012 (+54%) and 4x4s/SUVs (+21%), the two new Pandas are the right products for today's customers.

Rob added that with its all-wheel drive system the Panda 4x4 is a genuine go-anywhere on- or off-road performer. The Trekking will appeal to owners who, when conditions are difficult, want the added confidence that their front-wheel drive Panda can cope with poor on-road conditions or for light off-road recreational use.

Both the Panda 4x4 and the Trekking versions have the option of two engine choices: a 75bhp 1.3-litre MultiJet turbodiesel and the award-winning 85hp 0.9-litre TwinAir turbocharged two-cylinder petrol unit. Both have Fiat's fuel- and CO2-saving Start&Stop function. The petrol TwinAir 4x4 model has a six-speed manual transmission while the other variants come with a five-speed manual gearbox.

Six out of ten Panda 4x4 customers will buy the diesel engine because its higher torque output (140lb ft) is more suited for progressive but strong power delivery in off-road conditions.

The Trekking version is likely to see 60% of buyers choosing the sporty TwinAir turbocharged petrol engine for its more sprightly on-road performance.

Both models are based on the current third-generation Fiat Panda with its Lounge specification but with added equipment.

The Trekking TwinAir costs Ł12,450 and the MultiJet version Ł13,450. This is Ł1,200 more than standard Panda Lounge models because of the Traction+ system and the same added spec items as the Panda 4x4.

Customers for the Panda 4x4 and Trekking variants have a wide choice of extras cost options, the most appropriate being, given their off-road performance, Ł50 for a space-saver spare wheel.

This third-gen Panda front-wheel drive range went on sale last year but the first Panda 4x4 appeared in the previous century — all of 29 years ago. This latest generation 4x4 and the first generation Trekking have the standard, compact five-door (but tall) Panda body, but enhanced by chunky front and rear bumpers, protective side and wheel arch mouldings, a raised (200mm) ride height for better ground clearance and 15-inch alloy wheels.

Inside both models you'll find a raised centre console in order to position the added traction system select buttons closer to the driver's hand. The appealing use of colours and finishes for the cabin gives it a lively appearance and specification is relatively high, with AirCon, electric front windows, electrically-adjustable and heated door mirrors, remote central locking, height-adjustable steering wheel, front and rear head restraints, front and window airbags, and a radio/CD player with six speakers.

Both engines we already know, so there isn't much to add about those. More to the point is the permanent drive 4x4 system although for 98% of the time, say Fiat, the Panda 4x4 will operate in front-wheel drive mode only with drive to the rear wheels taking place automatically when traction is lost at either of the front wheels.

The driver can also select 4x4 mode which gives a progressive and maximum 50:50 torque split between the front and rear axles.

The electronic braking stability function will apply the brakes to whichever wheels are spinning and then divert the power to the wheels with grip to get the vehicle out of difficulties.

The Trekking's Traction+ system only operates on the front wheels at speeds up to 18.6mph. Essentially, the front differential applies traction to the wheel with the most grip and automatically applies the brake to the spinning wheel so the wheel with grip literally drags the car out of the mud or snow, making it more surefooted than a conventional front-wheel drive system.

The driver can also manually select Traction+ when the driving conditions get tough; in this setting the system will also provide more 'adhesion' driving through corners on gravel.

The Trekking's chunky SUV styling will also increase confidence for more nervous drivers when they venture out into wintry on-road conditions or the occasional trip off-road onto grass car parks and the like.

The Panda 4x4 might be compact but it's no lightweight 4x4 performer: its off-road performance over a tough four-wheel drive course at the media launch was impressive. The 1.3-litre turbodiesel engine I found better suited to off-road driving — thanks to its better torque (140lb ft from 1,500rpm) at low engine speeds which made it more controllable downhill and gave it more power to climb steep slopes. And because of its relatively light bodyweight, it just skipped over deep mudded tracks and ruts.

By comparison, the peaky power delivery of the turbocharged two-pot 0.9-litre petrol engine needed more care so as not to stall the engine going up steep hills at low speed to maximise grip.

The 4x4 system performed really well with both engine options and puts to shame many other larger 4x4's and crossover models. The only missing technical element was descent control, so going down steep ice and snow-covered rutted tracks was a leap of faith using the brakes and engine braking.

On the road the Trekking with the petrol engine was a lively performer despite its only having a single pair of cylinders; better still, it likes to be revved and that gives it a sporting engine tone.

Fuel economy driving around the minor roads of Warwickshire was 35.8mpg — well down on the official 61.4mpg. Top speed is 106mph and nought to 62mph takes 11.5 seconds. Road tax is a welcome zero for the first year and then only Ł20 for the second year onwards. Insurance falls in the low group 6.

The Panda 4x4 1.3-litre diesel on-road also likes to be revved, but it delivers more response and is more flexible to drive. The fuel economy for a 'spirited' drive on minor roads returned a decent 47.4mpg against the official 60.1mpg figure. With CO2 emissions of 125g/km, you won't pay any road tax for the first year but then it's Ł100 per annum. Top speed is 99mph and zero to 62mph takes a lengthy 14.5 seconds. Insurance is rated at group 7.

Both the Panda 4x4 and the Trekking version give a firmer ride than standard specification Panda models due to the elevated height and tougher tyres, but in some ways the ride quality is in keeping with the 4x4 image. There is, of course, more cornering bodyroll — again due to the tall body and higher ground clearance — but that too is in keeping with its chunky off-roader design. Against? Unsettled ride, cornering bodyroll, pricey, no off-road descent control, space-saver spare wheel costs extra.

On the plus side you get an easy-to-drive and practical 5-door city car with chunky off-roader styling and country car abilities that include impressive 4x4 ability.

Because of its price and styling, I think the petrol-powered Trekking will appeal mainly to urban owners who like the image and that just-in-case, get-me-out-of-trouble added traction.

The Panda 4x4 already has a small but loyal following and although demand for an SUV/4x4 in this sector is small for now, its off-road capabilities are huge and most of all it's good fun to drive. — David Miles