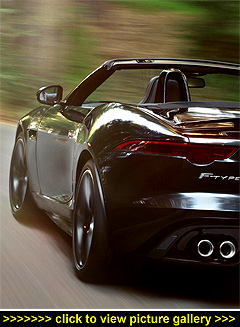 “Since its UK launch in April 2013,
Jaguar’s F-Type Roadster has
outsold Porsche’s 911 Cabriolet.
So, after a week behind the wheel,
is it an icon in the making?”

THE F-TYPE COUPE, when it goes on sale in the UK in 2014, will cost from Ł51,235 — around Ł7,000 less than the comparable drop-top Roadsters. Both ranges have V6 and V8 supercharged petrol engine options along with a new eight-speed automatic transmission as standard.

Roadster models get their power down through the rear wheels via an eight-speed Quickshift close-ratio automatic transmission with a centre console-mounted SportShift that, in addition to the steering column-mounted paddle-shifters, provides the driver with manual, sequential or fully automatic changes.

The beefier S versions have limited slip differentials — a must-have feature missing from my standard V6 test car. Both S V6 and V8 models are also fitted with an Active Exhaust system (a Ł1,630 option on the standard V6 model). A number of bypass valves in the rear section of the exhaust open under hard acceleration conditions to 'enhance' the sound quality. If it was a standard fit feature I'd say fine, go for it.

However, there are loads more essential options that money could be better spent on, including such items as heated seats (Ł350), or performance seats in leather at Ł1,450 which are not only comfortable but offer much needed support, a heated front windscreen at Ł250, a set of two carpet mats (Ł120), a must-have wind deflector (Ł250), a space saver spare wheel at Ł255 and, if you really want a rough ride, spend Ł1,000 on the 19-inch alloy wheels option. My advice? Stick with the standard 18-inchers because the ride comfort from the sports suspension is already firm enough.

The snug two-seat cockpit is best described as aircraft style; it's nicely laid out with logical, easy to use controls and easy to read dials. The fascia is high level — not an issue for a six-footer like me but shorter people will find it restricts forward vision when judging the length of the long bonnet. Generally, the quality of the cosy interior is good but some of the controls around the steering column felt a tad flimsy and looked cheaper than the rest of the interior.

Which brings me to the small, odd-shaped boot which offers just 196 litres although the smooth-operating, powered fabric roof doesn't reduce that space further when folded down. The boot lining also, disappointingly, felt cheap with thin carpet covering flimsy panels — not the sort of quality we have experienced in other Jaguars, past or present. Another gripe is the hood's small rear window which severely restricts visibility — rear parking sensors are an absolute must.

Jaguar says the F-Type is a continuation of a sporting bloodline stretching back more than 75 years. However, whereas the E-Type was designed for sports performance but with an elegant and refined appearance to compete against the Ferraris of its day, this long-awaited E-Type 'replacement' is very different.

The classic Jaguar design refinement has gone; while its wide haunches and 'chopped' rear-end design show an aggressive sporting intent, in reality it appears less classy than it should —and could easily pass for any American brand muscle car. But then the US is a big market for the F-Type…

It was interesting that during my week of ownership the F-Type didn't turn out to be the head-turner I expected. In fact, when parked, people just passed it by — perhaps Christmas shopping was more on their minds.

It does appear to split opinions: some of my motoring colleagues are impressed and like its handling; others feel, like me, that it has missed its target in terms of styling and handling.

I understand from motoring 'scribes' who have driven other versions, that the further you go up the range the more fun the driving is. But I wouldn't pay over Ł20K more for the V8 and I'd have to think very hard about paying Ł9K more for the mid-range V6 S version. Whichever model you choose they look the same and, to be honest, given today's congested roads, the difference in top speed and acceleration times is marginal.

That noted, there is no doubt that the engine and transmission performance is first class even from the 335bhp 3.0-litre V6 I've been driving. The supercharger gives it immediate 'raw' power with zero to 62mph taking 5.3 seconds and a top speed of 161mph with an exhaust soundtrack to match. It snarls (if it was an animal, it would bite) and if not driven in a way that matches the driver's ability it will surely bite them, especially in its sports/trackday mode.

The eight-speed autobox is perfect for this supercharged powerplant and its 332lb ft of torque from 3,500rpm. The close-ratio gearchanges happen quickly and seamlessly as you accelerate. But beware sudden pedal-to-the metal prods on the accelerator because the rear wheels will spin easily on damp roads; and too much cornering speed under acceleration will cause the tail to go into a drift because this version lacks the control a limited slip differential provides.

Even when in docile cruising mode the back-end fidgets around and the front wheels tend to follow the ridges in the tram-lined road surfaces. The ride is firm; and the faster you drive on A- and B-roads the harsher it becomes, hence my suggestion that owners tick the box for the supportive sports seats and stick with the standard 18-inch wheels.

The F-Type can be a cut-and-thrust racer but the 335bhp version can also be docile when needed, and it coped effortlessly without tantrums commuting in stop-start traffic. It did, to be honest, impress me more as a long-legged cruiser on motorways, despite the tyre noise intrusion. Also welcome is a snow setting which reduces the aggressiveness of the power delivery.

Officially, the 335bhp 3.0-litre V6 aluminium-bodied F-Type will return 31.4mpg in the Combined Cycle. My road test average for a week of fast A- and B-road driving plus some commuting and motorway mileage, came in pretty close to the official figure — 29.2mpg.

However, CO2 emissions of 209g/km mean road tax costs Ł620 for the first year (Ł280 for the second year onwards). Company car user-chooser executives will pay 33% in Benefit-in-Kind tax and insurance, for all versions, is rated at the maximum group 50.

For? Good straight-line performance, slick and fast-acting new automatic transmission, good fuel economy, and a neat-folding fabric roof. However, it comes with a firm and fidgety ride, and without the limited slip differential handling and traction is indifferent. Other gripes are some cheap areas of trim and controls, the small boot, the small rear window, and pricey options.

Overall though the F-Type is good; but is it good enough to worry Porsche owners long-term? Initial sales say it is. Once the pent-up demand for a long-awaited Jaguar sports car has been met, will it then stand the test of time? And can it, like the E-Type, attain 'icon' status? Not in my book, it won't. — David Miles