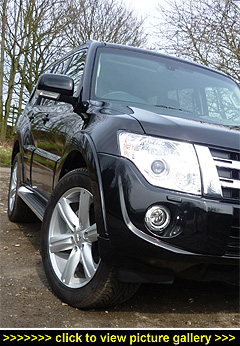 “Mitsubishi’s Shogun is respected worldwide for its tough, get-you-there-whatever nature. A genuine 4x4 that’s equally at home in the city as it is out on the range, the Shogun just keeps getting better and better...”

IN KEEPING WITH THE TIMES, providing the power under the latest Shogun's bonnet is a cleaner 3.2-litre turbodiesel unit. Don't be fooled by its square-jawed yet urban chic looks — the Shogun is still as tough as nails and the five-door will make light work of towing a hefty 3,500kg.

Still wearing a formidable set of wheel arches and sitting high off the ground, its 'rep' for utter off-road dependability and performance is well-earned. Apart from a small coterie of genuine 'go-anywhere, anytime' players such as Land Rover's finest, there are less hardcore, tarmac-biased 4x4s such as the Q5 and Q7 from Audi and their BMW equivalents (X5/X6). But for many, especially those driving in the real wildernesses, the Shogun is the sure thing.

You don't need to know a damn thing about the 'grubbins' underpinning the Shogun to benefit from its abilities, apart from, and perhaps just for peace of mind, that it still uses a tried-and-trusted tough ladder-frame built into its monocoque chassis for go-anywhere ruggedness.

Neither do you need to know anything about its 4x4 hardware either — if you can pull a selector lever then you'll do just fine. Shoguns not only have all-wheel drive as standard but provide 'proper' high- and low-ratio gearing — something the rash of pseudo 4x4 crossovers on the market can only dream about.

The other essential for off-road capability (apart from a capacity to hit a rock and still keep on rockin') is torque. Not the motor-mouth kind but the real 'lb ft' variety. And the latest four-cylinder turboed 3.2-litre direct injection diesel unit from Mitsubishi has plenty of that — a gutsy 325lb ft to be exact, at 2,000rpm (up from 275lb ft). Boosted too is power; from 168 to 197bhp.

And, in spite of the increased power and torque, down go the CO2 emissions: in the auto's case, from 280 to 224g/km (excellent news for running costs because the reduction has delivered a two-band drop in road tax). Fuel economy is also improved — for the five-door auto we drove it's now 33.2mpg (previously 26.7mpg).

The bottom line, performance-wise, is 0-62mph in 11.1 seconds with a top speed of 111mph. Driven over a broad mix of roads with quite a bit of town duty, our test SG4 auto returned 30.1mpg — close enough to the official figure to show that less heavy right feet than ours should do better.

Climb aboard — yes, you step up quite high (there are non-slip side steps if your passengers need them along with six damped grab handle as well as sturdy pull-in handles on the A and B pillars but any averagely fit person will manage fine). You also sit tall inside the Shogun in big lightly-but-adequately-bolstered seats surrounded by plenty of space (the driver and front passenger enjoy power lumbar and two-stage seat heating). The leather-clad wheel only tilts for height/rake but not reach. Not a problem with the amount of powered seat adjustability.

The cabin is welcoming; the hewn-from-rock facia brightened up by slim wood veneer inserts (echoed on the door panels and the centre tunnel), and the dials — the speedo and rev-counter each in its own nacelle — are easy to read.

And thanks to the tall greenhouse and large door mirrors, visibility for the driver is excellent in all directions, including to the rear — making life less stressful on-road generally and in traffic especially.

A driver's information display tops the centre stack and shows the usual range-to-empty, average mpg, outside temperature, etc., plus an electronic compass, barometer and altimeter — not gimmicks, these last three, but vital if you're far off the beaten track in unknown territory.

And in the rear compartment there's a DVD, CD and computer game entertainment system with LCD screens in the front headrests that comes with a remote control unit and a set of wireless headphones. A digital signal processor delivers 5.1 channel home theatre sound through a 250mm subwoofer, four tweeters, three mid-range speakers and four mid-bass door-mounted speakers. Hear it you will.

Keeping the Shogun's cabin shipshape is no problem as there are plenty of storage bins and cupholders along with a large, deep glovebox supplemented by a sizeable storage box beneath a centre front armrest that's big enough for two and which extend-slides forward and doesn't, thankfully, foul the traditional handbrake.

The five-door models are not only very accommodating for five grown-ups, but come with two extra 'Fold2Hide' seats in a third row that, whenever luggage or load space needs take priority over people, fold away to stow out of sight under the boot floor.

Row two passengers get a particularly good deal with reclining backrests and a wide centre armrest (with pop-up cupholders, of course); and there's ample headroom even when sitting upright. Outer armrests are built into the doors, and, as mentioned, there are DVD screens in the backs of the front headrests so those travelling in the middle row don't have to make do with out-of-the-window views (good as they are because they sit about six inches higher than those in the front row) when the conversation dries up.

Wireless headphones mean movie fans don't disturb anyone else when watching DVDs, while gamers can, well, game on! A flat floor provides plenty of foot room for three pairs of feet, so three in the back will go. All made better by climate control specifically serving the cabin's centre row.

Wide opening rear side doors and an inner step make for easy access to seats six and seven — although the third row is really best for youngsters. The other consideration when using seats six and seven is that with every seat occupied you're restricted to 215 litres for baggage or shopping.

Boot or loadbay access is excellent; the side-opening tailgate is hinged on the driver's side for safe and easy kerbside loading and unloading. Better still, the low loading height won't put a strain on your back. A full size spare wheel (protected by a smart-looking and easily-removed body-coloured casing) is mounted on the outside — so no mess (or decanting the load) should you suffer a puncture.

In five-seat configuration the Shogun's boot swallows 663 litres of 'stuff'; limit yourself to one front seat passenger though and you'll have a 'commercial' 1,790 litres of totally flat loadbay space behind you — big enough to sleep in. Who needs Travelodge?

When it comes to shifting through the transfer box to manually select the driving mode, the Shogun has stuck with tradition in that it uses a proper lever (leather-topped and located a few inches to the left of the autobox's manly selector) to move between 2H (two-wheel high-ratio driving the rear wheels that's also fine for towing) and 4H (full-time four-wheel drive.

Both 2H and 4H are selectable on the fly at speeds of up to 60mph — just lift off the accelerator pedal as you shift. 4H is ideal for driving on normal tarmac surfaces as well as packed snow, ice or flat dirt tracks.

Locking up the centre diff in 4HLc provides high-ratio four-wheel drive for when you're driving in trickier conditions, such as soft snow and sand; the low-ratio locked diff setting 4LLC (max 45mph) delivers max trax for negotiating rocky terrain or swampy conditions — or getting free if you're stuck. Changes between 4HLc and 4LLC can only be made when the vehicle is stationary.

Safety items — on top of the 4WD — include active stability control and traction control and a clever brake override system: should the driver accidentally hit the brake and accelerator at the same time the Shogun will automatically opt for the safer braking option. There are also twin front, side and curtain airbags, height-adjustable front seatbelts, and high intensity discharge headlights with washers and automatic levelling.

Off-roaders will appreciate the full-size matching spare wheel mounted externally. In the rough, a deflated tyre is almost certainly going to be due to a punctured sidewall — for which a can of sealant or a 'tyre repair kit' holds no cure, even temporarily.

Another very likeable trait is that the Shogun, unlike some, is snob-proof; it's as classless an SUV as you're likely to come across. Shoguns can be found most everywhere; working high in the mountain passes around Kathmandu, towing horse-boxes at the Badminton Horse Trials, and even mixing it in the Great British school run.

Off-road it's a case of 'ask not what you can do for your Shogun, but what your Shogun can do for you'. The answer is that it can do the lot: thanks to 220mm of ground clearance, a 700mm wading depth, 48.2 degree climb and 45 degree roll-over angles, approach/departure angles of 34.5/24.5 degrees and a 22.2 degree ramp break-over angle, the Shogun will confidently tackle the most challenging off-road conditions.

Driving on proper roads, the Shogun is good — the actual surprise is just how good. Even rolling on 20-inch alloys wrapped in 265/50 Yokohama rubber, our SG4 rode comfortably, riding over bumps and speed humps in a manner that won't spill your passengers' drinks — courtesy of a suspension set-up that can take the worst off-road conditions in its stride.

Handling is composed and predictable with body lean well controlled, and when pressing on there are no surprises of the unpleasant kind. Also good is the power-assisted rack-and-pinion steering that's been tweaked for better feel whatever you're driving in, on, or through.

Making the most of the power calls for no special skill: the five-speed autobox does it all for you. And for those times — on-road or off — that you want full control, then the sequential Sports mode puts you firmly in charge with driver-selected up and down changes using the selector lever. And when you need to slow the pace, powerful disc brakes front and rear deliver strong stopping power.

The Shogun is so much more than an off-road warrior — it also makes a fine family-friendly road car that will easily meet all your load carrying (family and leisure) as well as towing requirements in all weathers. — MotorBar