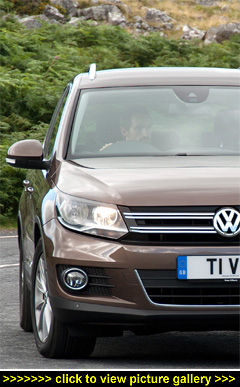 UNLIKE CROSSOVERS such as the Nissan Qashqai, whose 2WD models are the range's best-sellers, it's the four-wheel drive Tiguan models (badged '4Motion') that sell best, accounting for 80% of Tiguan sales, which is why VW class it as an SUV.

Like the superseded model, the seriously refreshed Tiguan offers something that not one of its rivals can. Available not only with a choice of two or four-wheel drive set-ups, the Tiguan also offers the option of two front-ends: one has an 18-degree angle of approach that's biased towards on-road driving; for off-road there's an Escape model with a 28-degree angle of approach, backed up by additional off-road driving technologies.

Bearing a strong resemblance to its Touareg big brother, the revamped Tiguans feature a new look dominated by horizontal lines on the front grille that brings them neatly into line with other new VWs such as the Golf. At the back, the Tiguan shows a distinctive tail courtesy of new two-part light clusters (similar to those of the Touareg) that form an 'L' shape.

The new Escape model features comfort and convenience features such as Bluetooth and a multifunction steering wheel. These were not previously standard but Volkswagen UK say this is down to customer demands for off-road capability to be combined with a high level of equipment.

The single most popular version of the new Tiguan range is expected to be the 140PS 2.0-litre TDI turbodiesel in SE spec with 4Motion 4WD and a six-speed manual 'box. Priced at Ł25,645 on-the-road, this particular model will continue to account for almost four out of every ten Tiguans sold in the UK.

Six engines are available: three petrol and three diesel, and four of these are new to the Tiguan. The new engines include a 160PS twin-charged 1.4-litre TSI (up from 150 in the previous generation), a 180PS 2.0 TSI and a 210PS 2.0 TSI (previously 200PS). Despite the power increases, tailpipe emissions have remained as before; some have even improved.

A 110PS 2.0 TDI engine is also available in 2WD guise with CO2 emissions of 139 g/km. Two other diesel units are carried over from the previous generation — the 140 and 170PS 2.0 common rail TDI engines. Lower emission Tiguans are badged BlueMotion Technology and feature Stop/Start and battery regeneration systems.

There are a number of new options available including 'Kessy' (Keyless Entry and Start System), the RNS 315 SatNav, Lane Assist and Light Assist. Also available is XDS electronic differential lock — as fitted to the Golf GTI.

The previous Tiguan was renowned for its versatility and practicality — and the new four-door, five-seater model is no less accomplished. The 60:40 split rear bench seat can be reclined as well as moved backwards and forwards (by just over six inches). Cargo-carrying capacity goes from 470 to 1,510 litres.

The secret of the Tiguan's success has been — and still is — the ease with which it can switch from conventional family car to mid-sized SUV.

All the controls are positioned where you expect to find them and visibility is good, making it extremely easy to park and drive.

There are no added controls to change from 2WD to 4WD — that happens automatically as and when it needs to.

It's a bit taller, with more ground clearance and a bit more chunky than your average family car — but it doesn't look that dissimilar to one. And it doesn't shout '4x4 gas guzzler' to the eco-warriors or, more likely, the 'green yummy mummy brigade' jostling for position on the school run.

Far more important reasons to drive a Tiguan are the first class ride comfort and road holding. It's been a while since I had driven a Tiguan although I have driven lots of the latest crossover models which, while popular and looking like an SUV, are in fact just two-wheel driven, 'jacked-up' five-door hatches sitting on big wheels — which is why most offer a generally mediocre ride and vague road holding.

Getting back behind the wheel of a Tiguan reminded me just how good this vehicle is in the comfort and handling departments — it probably is the most comfortable, stable and refined vehicle in its sector. The only niggle is with the optional lane-changing alert system which, when switched on, made the steering response feel less sharp.

Off-road, the new Tiguan will be no match for the Land Rover Freelander but then, other than the occasional drive on farm or park tracks or across a muddy field, the main job of the Tiguan's seamless 4Motion system will be coping with bad British road conditions. On-road it delivers more grip and traction in rain, ice, snow and mud so it's a complete peace-of-mind, modern day, family motoring package.

With seating for up to five and a fair amount of boot space (or even more load space with the rear seats folded away), the latest Tiguan is still probably the most fit-for-many-purposes mid-sized SUV available today.

I had a brief test drive in the best-selling 138bhp 2.0 TDI SE 4Motion with a six-speed manual transmission (a seven-speed DSG auto costs an additional Ł1,525). Costing Ł25,645, this will be the best-selling version of the latest Tiguan range. It certainly isn't cheap (or for that matter too expensive), but you get what you pay for.

The turbodiesel's 138bhp and 236lb ft of torque (from 1,750rpm) makes it a very user-friendly unit. Both fifth and sixth gear ratios are wider spread to lower the exhaust emissions, which means changing gear more often to overtake slower traffic rather than just pressing the pedal to get the extra giddy-up.

At 116mph, maximum speed is more than adequate and makes 70mph motorway cruising effortless. Zero to 62mph takes only 10.2 seconds — better than many diesel-powered family hatchbacks — and only above 60mph do the high gear ratios make the acceleration feel dulled.

For a 4x4 SUV, fuel economy is good: officially 48.7mpg. My test car returned 44.4mpg and that included town traffic driving as well as a spell on a busy motorway. The CO2 emissions are 150g/km so the annual road tax bill will be Ł130 — cheap for this kind of vehicle. Neither is the 18E insurance rating going to damage the family budget. And if company car drivers can arrange to have a Tiguan as their workhorse and family transport, then the 20% Benefit-in-Kind tax isn't going to hurt too much.

Against? Electrically-operated parking brake, no descent control for off-road driving, tall gearing dulls top-end acceleration, and the steering gives less sharp feedback with the lane departure warning system switched on. But the plus points are all major ones: comfortable, thoroughly competent family-friendly mid-sized 4x4 SUV with relatively low running costs, easy to drive and very accomplished on-road in all weathers. — David Miles