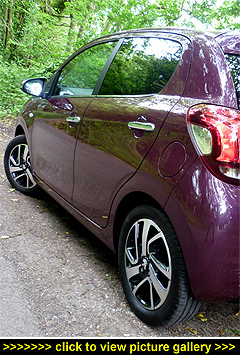 “If Dick Whittington came to London
today he’d be in for a shock; for a
start, the speed humps aren’t paved
with gold. However, if he drove to
the capital in a funky all-new 108 he
probably wouldn’t care...”

FUNKY IT MAY BE on the outside but there's more to Peugeot's smart new city car than meets the eye. Replacing the long-running 107 in the Peugeot line-up, and powered by a three-pot petrol engine, it's as much at ease out of town as it is pootling about in the Congestion Zone.

Peugeot's recently unveiled 'PureTech' engines for the 108 comprise of 1.0 and 1.2-litre units but remember that size isn't everything: these might be small on paper but in real-life they offer all the benefits of a four-cylinder 1.6-litre.

Customers will also be very pleased to know that these all-new petrol-only engines won't hurt their pockets when it comes to road tax (you'll never have to pay a single, solitary penny), prick their conscience every time they drive it (CO2 emissions are a green-hued 99g/km), or cost them dear at the pumps (officially the 1.2 82bhp version returns 65.7 on the combined cycle; in real-world road conditions our week's average was 51.5mpg).

Externally the 108's an eye-catcher; in the right colour a real head-turner — our 108's sculpted body was resplendent in Purple Berry enhanced by a generous application of chrome detailing. Don't expect to see this colour on other makes as it's exclusive to Peugeot.

This paint finish, along with a palette of other striking colours, is just the tip of the iceberg so far as personalising your 108 goes — also offered is a huge a la carte menu of two-tone paintwork, roof colours, dashboard finishes, exterior decals, and 'theme' kits (factory-fit options that include exterior and interior decals, door mirror covers, carpet mats and a key fob cover) as well as a range of accessories sold through Peugeot's dealer network. In today's small car market this is as important as a car's 'connectivity' (more about this later).

The five-door hatch measures a compact 3,475mm nose to tail. Two rear headrests and two rear belts designate it a four-seater and, yes, four adults can travel together. Back seat passengers sit higher than those keeping views out interesting; the cushions are well plumped, there's plenty of foot room along and outer armrests are well sited. Adults measuring under six-feet tall will have just enough head- and knee-room but if you have kids they'll best be the designated rear-seaters (rear Isofix child seat fixing points are standard-fit items).

South of the cabin border delineated by the 50:50 split/fold rear backrests is a 196-litre boot. Accessed through a good sized opening via a lightweight all-glass hatch, there's enough room to take long-haul roller cases as well as the more mundane weekly shop (bag hooks are provided).

A neat feature is the luggage cover — instead of a cumbersome rigid item is a fabric cover that lies flat against the tailgate glass when the hatch is open but when it's pulled down the cover cleverly pivots to the horizontal position to hide whatever's in the boot. With the seatbacks down there's quite a large cargo area.

Back in the front, the driver and passenger will find much to be pleased about. First off, getting in and out is easy, helped by a fist+ of headroom. The well-shaped seats, with integrated headrests, are pleasantly supportive and have effective side bolstering. There's a fistful of headroom while long seat bases provide good under- thigh/knee support. And the front passenger can really stretch out.

Backrest adjustment is via a large knurled knob that's both easy to reach when you're in and only calls for a light touch to turn. Also appreciated are seatbelts that adjust for height. Overall the driving position is fine and affords good visibility out including through the back screen.

A flat-bottomed multifunction steering wheel means more thigh room, plus its meaty leather rim is nice to grip. Enhancing comfort further is an effective climate control system, and a main instrument cluster that moves in sync with the rake-adjustable steering wheel so it's always perfectly in view. Boosting the fascia's visual impact is a glistening Porcelain White dash panel and infotainment screen surround contrasting beautifully with the body-coloured tops of the doors.

The instrument cluster is an all-in-one dial: the outer ring is marked for mph while the inner core is reserved for the trip display; a gear shift prompt sits on the right outer rim while an orange-coloured digital bar graph on the left keeps track of the revs. Fuel also gets a horizontal bar at the base of the trip info screen.

Topping the centre stack to your left is a crystal-clear 7-inch 'connectivity' touchscreen that's the interface for the USB/AUX/DAB digital radio-equipped audio system, trip computer, vehicle settings, and Bluetooth connectivity for the driver's smartphone. Infotainment menus are commendably straightforward and easily navigated. Should you require A-to-B navigation then Mirrorlink is incorporated to facilitate routing through your smartphone.

Also shown on the screen is the view from the reversing camera complete with an overlay grid to guide you although, thanks to the 108's short front and rear overhangs, it's easy to park without any aids.

Safety is also well specced with a four-star EuroNcap safety rating, six airbags (front passenger and driver, front side, and front and rear curtain) plus ESP stability control and tyre pressure sensing for peace of mind.

On the move the PureTech engine is a game one — when you need some mid-range get up and go this punchy and smooth-spinning 1.2-litre delivers it eagerly, accompanied by a likeable three-pot warble. The five-speed box is stirred with a lever topped by a spherical metal ball knob and the change action is quick and clean. Keeping up with the traffic on motorways is never a problem; cruising along at the legal limit calls for a calm 3,000rpm.

The Achilles' heel of many small cars is their ride. Because of their short wheelbases, city cars often make you feel like Humpty Dumpty — not so the 108 which weathers the speed humps well.

Off the 30mph-leash on B-roads, the 108 zips through twisty sections with some gusto. Pressing on there's a bit of body lean but the damping keeps it all tidy enough and you can safely steam ahead. Sharp, accurate steering — the 108's turning circle is just 4.8 metres between walls — combined with some decent grip, a compact body size and light controls keep it feeling light and nimble.