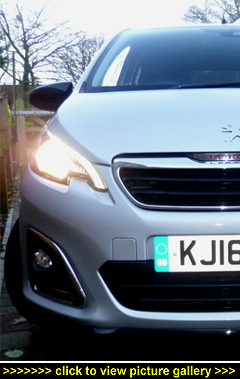 “If you’re a ‘big’ car person it may
surprise you to know that there’s lots
of satisfaction to be had from a
stylish kit-rich city car. And if it’s a
comfortable ride you’re after, look no
further than the 108 GT Line...”

BUDGET-WISE A Ł13K SPEND will buy you the penultimate 108 in newly-introduced GT Line spec with five doors and a gutsy 1.2-litre petrol engine under the short but shapely bonnet — and, as drivers will be quick to appreciate, it comes with many of the features usually only found on bigger and decidedly more expensive cars.

Fronted by a 'floating' chrome-wrapped grille and über-sleek headlights with shapely LED daytime running lights, the 108 sports an upmarket look. Combined with plenty of elegant body sculpting it gives off a chic and assertive air — the tail treatment is equally smart with a black all-glass hatch flanked by triple 'lion claw' tail lamps and capped by a subtle black roof spoiler.

Should you want to boost your 108's kerb appeal even more, then simply choose one of the eye-catching metallic paint finishes such as Purple Berry or Aikinite (a stunning bronze); even more daring, go for a two-tone paint job — in fact the 108's personalisation options, both inner and outer, are huge.

There's nothing 'small' about the 108's safety kit either: Active City Brake (up to 20mph it warns of potential contact with parked or moving vehicles ahead and will, if necessary, emergency brake for the driver if he/she fails to respond in time), electronic stability control, lane departure warning, hill holder, and six airbags.

We live in a stressful world so the 108's timesaving Open & Go keyless entry system is especially welcome: no fumbling for keys as you approach (particularly in the dark); just slip inside and press the Start button and you'll be away faster than you can say 'Bonnie and Clyde'.

The GT Line's cabin is sporty and appealing, thanks to black leather seats and well-considered trim: there's a classy mix of finishes with high gloss black around the centre stack with echoes on the sporty flat-bottomed multifunction steering wheel (nice leather rim, by the way) and striking Laser Red fascia embellishments.

An all-in-one combination dial is housed above the top of the steering wheel and moves with it; so whatever the wheel's setting the driver retains a perfect view. A slim rev-counter band with an orange scale hugs the left curve of the speedo. Orange is a recurring theme — it's also the colour of the speedo needle and figures, as well as the background to the black-figured digital road speed/trip data readout (and underscored by the digital fuel gauge) inset in the dial's inner circle.

The lightly-bolstered, well-padded, sporty-style seats with built-in headrests are fine and, importantly, comfortable on long trips.

The driving position is first-rate and it's also amazingly spacious in the front, with meaningful shoulder support and ample elbow room (with large outer armrests), while above the driver's head is a full fist of headroom. Backrest adjustment is via a knob on the inner side of the seat where it's very easy to reach and use. Front passengers enjoys the same seat benefits, and also gets plenty of room to stretch their legs.

The traditional handbrake will be cheered by many drivers but all will appreciate the efficient climate control that ensures they keep their cool; it also does a good line in hot and the eyeball air vents direct the air exactly where you want it.

The icons on the touchscreen are big, crisp and colourful and can be tapped easily on the go and everything from trip data to phone connectivity can be displayed. For a small car the 108's cabin is easily kept free of clutter thanks to plenty of storage solutions including long door bins, large twinned cupholders near the gearlever with a third at the end of the centre console, a deep open tray with 12v power, USB and Aux at the base of the centre stack and a decent-size glovebox with a horizontal section designed to take a one-litre drinks bottle.

Although it measures a compact 3.5 metres nose-to-tail, the 108 will still accommodate four adults: the pair in the back enjoy well-padded seats and sit about six inches higher than those up front but still headroom is okay; foot-room is generous and knee-room good too, plus there are outer armrests. While the front windows are powered, the back doors have pop-open rear-hinged items — and they're fine.

Many owners are likely to make the most use of the front seats and use the back pair occasionally for irregular third parties, children (Isofix mountings are in place for the 50:50-split back seats), or shopping when it's sometimes quicker to throw stuff in the back than walk that bit further to the boot which on a wet day makes sense. For the record, with only two rear belts and two headrests you're clearly not expected (or legally allowed) to transport five.

If you do make it all the way to the tail, accessing it really is no hassle — the lightweight, all-glass rear hatch lifts easily to reveal a useful 196-litre boot that can more than cope with a family-sized weekly shop at Sainsbugs.

There is a drop over the sill down into the boot but even so loading/unloading isn't physically taxing. A neat touch is the fabric luggage cover that stays flat against the inside of the glass hatchback when the tailgate's up but when the boot is closed it pivots to the horizontal, cleverly hiding whatever's below.

For larger loads you can always drop one of both of the separate rear seatbacks — a light tug from the boot on their release pulls will do the trick. Reassuring, too, to see a rear wiper — this is, after all, a country where rain is often the lead topic of the day!

When it comes to deciding on an engine Peugeot has made it easy for you — choose between a 1.0-litre and a 1.2-litre PureTech. Both are three-cylinder units and both drink petrol (there's no diesel available).

The 1.0-litre makes 68bhp with 88g/km emissions while the 1.2-litre pumps out 82bhp with 85lb ft of torque while emitting 99g/km — which still gets you road tax-free motoring. A week's hard driving saw 'our' three-pot return a consistent 48.4mpg. More than acceptable given the 1,199cc PureTech's driveability.

While talking power, the three-cylinder unit is impressively smooth and enthusiastic, and keen to contribute early on in the proceedings — the result is 0-62mph in 10.9 seconds; the torque is also there for you whenever your right foot orders some mid-range 'spurt', which the 1.2 delivers gamely accompanied by a pleasingly characterful three-pot warble that will bring a smile to your face when pressing on.

Being a city kid the 108's well set-up for parking in the tightest of spaces with compact dimensions (it measures a handy 3,475mm nose to tail), a tight turning circle and plenty of manoeuvrability; plus, of course, the rear camera takes all the guesswork out of it.

Punting it through messy city traffic is a breeze but get it out of the confines of the concrete jungle and it's a game handler with more than enough grip and composure to encourage some playful driving — easily indulged in, too, as the rorty three-pot always has plenty of get-up-and-go to meet demands and it's all easily accessed thanks to a quick gearchange. And when there's no need to hurry or you're simply cruising motorways, the engine note is nicely subdued.

The steering is accurate, the stopping — ably aided by vented front discs — reassuring, and both on motorways and tackling twisting country backroads the 108 feels cheerfully planted.

Not that it was on our wish list, but we did have brutal weather conditions to contend with during our week with the GT Line — thanks to Storm Angus the 108 had a chance to show us just how well-mannered it was in adversity; it performed honourably while battling wild winds, relentless rain and flooded roads.

Given that these severe weather conditions are becoming more frequent than White Christmases, it's good to know that the 108 is more than just a 'city slicker' and will get you through regardless.

Another agreeable quality is the 108's ride: the suspension is relatively 'soft' but in a positive way; it rides well while the nicely-bolstered seats with their integrated headrests keep you comfortably in place — and not just on arrow-straight blacktop.

Well-groomed and cleverly packaged, the 108 is a premium city car; powered by an eager 1.2-litre three-cylinder engine that injects fun into your driving, it comes with the bonus of 50mpg economy. Well loaded with kit and with prices starting at just Ł8,245 on-the-road, it's sure to satisfy those downsizing as well as those who've already grasped the zen of 'small but perfectly formed'. ~ MotorBar