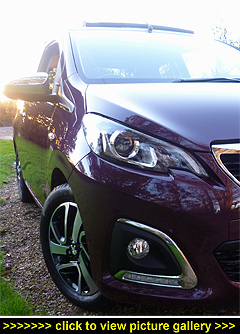 “City cars — Too small? Boring?
Never tried one? Prepared to be
very pleasantly surprised —
get behind the wheel of one of
Peugeot’s chic ’n’ cheeky new 108
three-door Cabrio hatchbacks
and you’ll soon find yourself
hankering after one of your own...”

THE NEW 108, launched in July 2014, continues the French carmaker's relentless product offensive and steady move up market, both in quality and style. Peugeot's cars — big and small — all now come with unmissable kerb appeal.

The 108 hatchback is available with three or five doors and with either a standard metal roof or a cabrio-style retractable fabric roof (understandably called the 'Top!'). Power can be any one of four efficient petrol engines, all with less than 100g/km and all zero-rated for road tax: three 68bhp 1.0-litre units with 88, 95, and 98g/km; and Peugeot's new 1.2-litre PureTech three-cylinder unit that puts out 82bhp and emits a tax-cheating 99g/k of CO2.

Entry-level prices start at a tempting Ł8,345 on the road, rising to Ł12,495. But whichever end of the range you buy into, Peugeot's bright and breezy new urban runabout cuts quite a dash.

Add in quality chrome door handles and door mirror skins, distinctive 'lion claw' tail lamps (styled as three luminous claws emerging from the bodywork) flanking a dark-tinted all-glass rear hatch and an eye-catching set of alloy wheels, and you have a car to be noticed in.

Inside it's equally good-looking. The fascia is pleasantly clutter-free — minimalist almost — courtesy of the large 7-inch infotainment touchscreen with clear and easy-to-navigate menus.

The central mounting makes it easy for both the driver and front passenger to use, whether it's to access car information, Bluetooth, the audio-system (with DAB digital radio) or the USB/Aux-connected media. Making it even more striking, and fitted to our test 108, was the optional (Ł100) high-gloss white 'Porcelain Ambience' dash insert and centre console surround.

A reversing camera uses the same crystal clear display to show exactly what's going on behind the 108 along with guidelines to make parking as easy as possible. Immediately below the main display is the manual air-conditioning console — and, more good news, the AirCon's pleasingly quick to deliver the exact temperature air you've ordered.

As well as 'connet' hi-tech, the 108 also comes fitted with various driver-aids such as a hill holder, speed limiter and tyre pressure sensors; and naturally there's plenty of safety kit — twin front side and curtain airbags, stability control, and LED daytime running lights. Our test Allure trim model also came with Peugeot's Open & Go keyless entry and locking (on both doors and the tailgate) so your key need never leave your pocket or handbag and to start you just press the button.

Physically, all's well in the cabin; the seats are big — big enough to be from a much larger car. And yet there's ample space all around them with good headroom. And the powered fold-back fabric roof adds a really great aspect to the 108.

One-shot powered opening makes it easy to let in the light, the sun, and the fresh air — pleasant even on crisp December days. The aperture stretches from the screen's header rail to back past the top of the front headrests, and even fully open you can still enjoy a motorway drive and converse with your front passenger.

Press the button again and it's a one-shot slide to the midway position, after which you can close it up some more (or fully) by holding the switch until you reach the desired position. And it's quick to open or close; for sure 108 owners won't be caught out by a sudden summer cloudburst!

The smart fabric upholstery is good to sit on; warm in the winter, and you don't slide about like you do on leather. The headrests are built-in like on a racing seat, the side-bolstering is minimal but effective, and although there's no adjustable lumbar support they proved to be surprisingly comfortable on a two-hundred-mile one-hit trip.

Belts are height-adjustable, as too is the driver's chair. The steering wheel only adjusts for rake but it's not a problem; and because the whole instrument binnacle moves up and down with the steering column you can always see all of the dials.

Along with a generous helping of connectivity-oriented features such as the 7-inch touchscreen infotainment system there's also Mirror Screen — this uses mirror link technology to replicate your smartphone screen, allowing you to access all multimedia functionality and apps on your smartphone and control them directly from the touchscreen. The 108 also offers plenty of personalisation options with a wide range of exterior paints, roof colours, fascias, trims and 'theme' kits as well as 108 merchandise such as watches, iPhone cases, etc.

The nicely-cushioned back seats in the three-door model are easily reached, helped by front seats that tilt and slide with the greatest of ease (and then return obediently to their exact starting position).

However, while adults on the shorter side of six feet can travel without any complaints (the base is also well cushioned, the front seatbacks are hollowed out for extra knee room, and the backrests set at a decent angle), the rear cabin is best suited to children and teens or, as often happens when driven one- or two-up, as a convenient place for your shopping or luggage overspill. If you use it in this manner, the privacy rear side glass and tailgate affords a bit more security.

With a 196-litre boot this isn't such a bad idea although the boot itself is of a regular and easily-loaded shape; bag hooks (how did we ever manage without them?) are also provided. Worth noting — the all-glass rear hatch is a lightweight item and requires no effort to raise.

If you need more carrying space then the 50:50-split rear seatbacks are easily released and folded forward. The 108 also comes equipped with a tyre repair kit; it's stored under the boot floor and there's quite a bit of extra out-of-sight space either side of it.

Traditionally, city cars haven't been the best riding cars; a characteristic of their short wheelbases which tends to make them 'jump' speed humps. Not so the 108 — thankfully, in spite of its city-friendly proportions, the 108's supple and well-tuned suspension means it rides city roads without any of the crash, bang, wallop of many small cars.

And while the 108's compact size is great for mean city streets, it's also perfectly at ease zipping down twisting country lanes or cruising motorways at the legal limit. The brakes, incidentally, are fine — good enough that you just naturally take them for granted and should you have to drop the anchors in an emergency (as we did), the 108 pulls up cleanly without any drama.

Going for the 1,199cc naturally-aspirated 'triple' pays dividends on the move; for a start you get a far more eager 82bhp and 85lb ft at 2,750rpm (instead of the 1.0-litre's 68bhp and 70lb ft) which in turn brings the 0-62mph acceleration down from 14.3 to 11 seconds. Matched to a decent set of ratios in the smooth-changing five-speed manual 'box, the 1.2 feels punchy and keeps you not just up with the traffic but mixing in nicely with it. And not forgetting, when driven hard, the subtle yet surprisingly satisfying warbling thrum of the three-pot powerplant.

As already mentioned, the suspension is supple, which benefits town ride comfort — but that doesn't mean it feels anything less than stable when pressing on out of the thirty limits. It feels nimble, grips well and the steering is crisp — not unexpectedly, its attitude to twisting roads is pretty much 'bring it on'. All-in-all, that makes the 108 a civilised, characterful and very well-rounded all-rounder. Not bad for a 'city' kid! — MotorBar