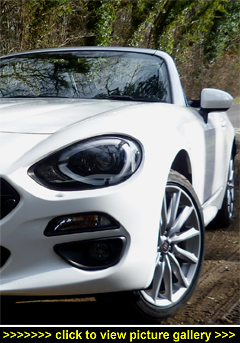 “Spider. When petrolheads hear
that they immediately think of
the ultimate F-word — Ferrari.
There is, however, another Italian-
badged drop-top sporting the
coveted ‘S’ tag: the 124 Spider...”

EVERYBODY WOULD LOVE a Ferrari but getting behind the wheel of Fiat's 124 Spider is not just dreamable, it's doable: prices start at Ł21K for this pretty Italian two-seater roadster whose name recalls the original Pininfarina-designed and Turin-built 124 Spider that was a big hit in America back when Scott Mckenzie was singing San Francisco (Be Sure to Wear Flowers in Your Hair).

Fast forward fifty-some years and this eye-catching Italian roadster is no longer built in Turin — today's 124 Spiders may have been conceived in Italy but are born in a Mazda car factory in the Land of the Rising Sun because beneath the 124's bespoke and eye-catching skin there's MX-5 DNA.

Not that you'd guess it from just looking because there's not a single shared panel between them; designed in the FIAT Style Centre, the 124's distinctive four-metre long body is all Fiat's own work.

A twenty-something whose parents remember the Swinging Sixties, or more likely whose grandparents loved through them, will see this new millennium's 124 Spider from a totally different viewpoint — to them it's just a pretty convertible that looks like a sure thing whereas their parents and grandparents might spot the new version's tribute to the original 124's swallow-tail rear wings. No matter, it looks pretty good even if you don't 'get' the provenance.

Resplendent in white and with the top down there's no mistaking the Spider's classic roadster profile: a long, broad and muscular bonnet stretching back from a hexagonal grille, with the cockpit flowing into the rear wings immediately ahead of the rear axle.

Defining each rear corner below the boot lid's intergal rear spoiler are distinctive horizontal LED tail lights with coloured centre sections matched to the paintwork. Lower down, a chrome tipped tailpipe protrudes either side of the neat central cluster of reversing and fog lights. Linking it plainly to the present are sturdy roll-hoops behind each headrest, all finished in silver, as too is the windscreen frame.

Those with a love of all things Italian will be cheered to know that below the long, wide bonnet with its subtle twin power domes, the heartbeats come not from a Japanese motor but one of Fiat's own turbocharged 1.4-litre MultiAir petrol engines that's good for 138bhp.

There's a deep-rooted pleasure in using your hands to do things for yourself, particularly so when it comes to driving — soon to be a fond memory as self-driving cars edge ever closer. And, as admirable as sophisticated double-clutch sport automatic gearboxes are, there's no beating the satisfaction of a well-judged down-change, or two, as you line up for a challenging series of bends using a stick-shift.

Likewise, pressing and holding a button to retract a soft-top can be rather dreary once the novelty has worn off whereas in the Spider it's a moment's work to release the safety before manually flicking back the fabric roof with typically Italian nonchalance.

But before the feast, you must sit at the table… Swing open the driver's door, drop down into the shapely black leather seat and rest your palms on the tactile leather-wrapped three-spoke wheel; the über-stubby gearlever is very close — like its gate — and with the uninterrupted view down the long bonnet it all comes together: sitting classically low and feeling totally in control, even before you push the starter button you can feel it in your bones — this roadster is going to be a hoot to drive.

The Spider's cabin fits like a glove; everything is perfectly placed, from the pedals to the pull-up handbrake to the gearlever and steering wheel to the cupholders in the charmingly streamlined cockpit. And whether you're just popping out to pick up a take-away or savouring a 200-mile touring trip, you'll find the seats are always comfortable and supportive.

A three-dial instrument cluster comprised of a large central rev-counter flanked by a smaller speedo and another dial incorporating the multifunction trip computer (sensibly accessed via a button on the wheel), all with brilliant white-on-black markings, tells you everything you need to know.

The SatNav, interfacing through a seven-inch touchscreen, is first-rate and one of the friendliest we've come across in a long while. Spoken commands are spot-on for accuracy and given in good time for you to position the car well before the event. The 3D mapping is crystal clear, with easily read street names.

The home screen is uncluttered and foolproof and controlled using either your index finger or the knurled rotary 'joystick' on the central tunnel just behind the gearlever; or mix and match using both. Better still, using the voice control to input your destination is a breeze. Hard 'jump' buttons let you dive straight into the main navigation and entertainment menus. Also integrated into the display is a rear-view camera with an on-screen grid, although parking is no hassle courtesy of rear sensors and the fact that the view though the heated glass rear screen is fine.

Above your head is a fist of air between you and the inner skin of the well finished hood; soundproofing, boosted by an acoustic windscreen, is good and with the roof up it's as quiet as you'd want a sports car to be — enough for some chit-chat without the need to raise your voice, but not that insulated that you can't hear the MultiAir when you're working it so don't need a rev-counter to tell you when to snatch a gearchange.

Quiet enough, too, should you want to enjoy some non-mechanical sounds by switching on the nine-speaker (including two speakers in each built-in headrest) BOSE sound system… if not, there's always DAB radio and music streaming via Bluetooth.

While at first glance it appears that, apart from a well-placed elbow pad on the central tunnel with a compact undertray, Fiat may have followed Ryanair's lead and be making you put your personal bits and bobs in the boot, don't worry — look to the rear bulkhead between the seatbacks and you'll spot a lockable cubby that holds a surprising amount of 'stuff'. And no extra charge!

The windows both have one-touch down electric operation and both seats have fast three-stage heating; you can dial-up fierce heat from the climate control (it has large rotary knobs for easy operation on the trot) which together with eyeball vents guarantee you'll be keeping snug even topless on a winter's day. Belt guides on the seat shoulders are also appreciated and minimise faffing around when buckling up.

You don't buy a drop-top unless you're intending to drop the top. Sounds reasonable. Fiat understand this and have given the Spider's hood a brilliant mechanism that makes going topless about as quick as is humanely possible — it can be unlatched and folded back, single-handed from the driver's seat in just seconds. In fact, if top-dropping was an Olympic sport then the Spider would win the gold with a faster time than any other convertible. For the record, the same goes for putting it back up again.

Top-down the cabin is snug even on the windiest days, the air flowing cleanly over the screen and over your head. At sane speeds there's no wind roar or buffeting whatsoever; the small windblocker between the roll-hoops also does a fine job of keeping out backdraughts and can be left in place permanently as while it effectively blocks draughts what it doesn't do is block the driver's rearward vision.

Driving the Spider top-down is stirring; make sure you do it at night too, when it feels even more intense. Obviously getting in and out is no problem with the roof down — the good news is that it's just as easy with the roof up.

So, raring to go? Press the starter button (like entry and locking, the engine start-stop is also keyless). Already proven in Alfa's Giulietta, the 1,368cc MultiAir is a turboed petrol engine that, thanks to its 177lb ft of torque being fully on song nice and low down the rev-band, is at its most tractable in the mid-range.

And this four-pot sings with a sonorous voice — sporty rather than rorty — while serving up the 0-62mph sprint in a crisp 7.5 seconds; that's keen enough to give even quite potent hot-hatches a bit of a shock. Top speed is almost double the UK's legal motorway limit at 134mph; and it has an unexpectedly easygoing high-speed gait that makes it a very satisfying touring machine. Lake Garda here we come!

Thanks to a wonderfully crisp and positive change action and six well-stacked ratios the 124's 138bhp combined with its healthy lag-free get-up-and-go ensures plenty of willing in-gear verve; it also delivers meaningful pick up in fifth and even sixth without necessitating a down change — but you'll probably want to anyway just to feel that satisfyingly accurate 'snick' as the lever slots precisely through the gate.

While the Spider makes comprehensive use of the suspension and underpinnings of the MX-5, Fiat's engineers have tweaked it enough to make it their own. Like the Mazda, the Spider lays its power down through the back wheels, so leaning on the rear Bridgestones when powering out of bends has that exuberance than no front-wheel driver can ever truly match.

Adding to the driving enjoyment is nicely weighted steering that's as quick as you'll need — plus the compact three-spoker offers good thigh clearance without that trendy flattened bit at the bottom. Body lean in corners is well managed, there's ample traction to keep it well planted.

The Spider is a totally enjoyable driver's car, one that feels alive in your hands whether your right foot is caressing or crushing the accelerator; and almost begs you to push it harder. Encouraging you to do just that, even on ragged tarmac, is the compliant suspension. Unlike some stiffer-suspended sports cars that can take being track-friendly a touch too far, less than perfect blacktop is not the Spider's enemy — thanks to its more mellow damping it feels composed and willing and, despite what's underfoot, will go wherever you point its nose.

Given the way it rides rather than jives over poorer surfaces, the Spider's well-fettled ride/handling dynamics won't let humpy-bumpy British roads kybosh your fun. Another essential in any driver's car is a predictable set of brakes and the Spider comes good here too, with a feelsome pedal and short stopping distances.

Economy is unlikely to appear at the top of any sports car buyer's shortlist but with the 124 Spider you get it anyway — officially the combined cycle figure is 44.1mpg, with CO2 emissions of 148g/km.

A week spent making the Spider 'sing for its supper' on a mix of A, B and C (for country) roads saw a very respectable return for every gallon of unleaded it drank — 42.7mpg. Given its turn of speed it was more than we were expecting. A more laid-back driving style (equally enjoyable and doubly so top-down) is likely to net real-life owners the mid-forty figure that eluded us.

Being a dedicated two-seater with driving pleasure as its rationale, few owners will be expecting their Spider to carry much more than a single passenger — if the other front seat is occupied by a person of interest then there's 140 litres in the boot for some staycation squashy luggage or weekender bags. As Yogi Bhajan said: Travel light, live light, spread the light, be the light!

Judged on smiles-per-mile, the 124 Spider is more satisfying and involving than just about anything else you can pick up for the same money; and nothing else gets its top off quicker. An authentic Italian roadster driving experience. ~ MotorBar