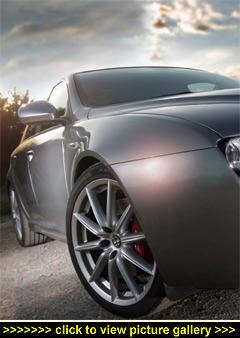 “In the past, Alfa Romeos appealed
to those individuals who dared to be
different; and the eye-catching 159
Sportwagon, badged with an emotive
automotive Italian designer label —
Giugiaro — is no exception...”

ALFA ROMEO HAS RESORTED TO 'SCAVENGING' to create its latest 200bhp turbocharged petrol engine. Far from what it sounds like, 'scavenging' is actually a high-tech solution that maximises torque at very low engine speeds.

The result, along with direct injection, turbocharging and dual variable valve timing, is that the new lightweight '1750' (1,742cc) twin-overhead camshaft, four-cylinder powerplant punches out 200bhp and a muscular 236lb ft of torque from just 1,400rpm — that's actually not much more than tickover speed.

With the 1750 TBi under its long bonnet, the 159 Sportwagon tested here is good for 146mph, sprinting to the benchmark 62mph from standstill in 7.9 seconds. CO2 emissions are 194g/km and routine servicing is now only required every 21,000 miles — so you can spend more time enjoying the driving experience!

And enjoy it you certainly will. The new engine is refined and willing to work as hard as you ask and, in true Italian fashion, it's eager to flirt with the red line. Thanks to the 236lb ft of torque arriving so early in the rev-range, in-gear acceleration is impressive in all of the gearbox's six ratios. At motorway speeds the Sportwagon lopes along at a mechanically unfussed 3,000rpm. Officially the 159 Sportwagon will return as much as 45.6mpg on the extra-urban cycle along with 23.5 urban and 34mpg combined. Our week's test saw an overall average of 30.3mpg.

But you don't even have to press the electronic engine Start/Stop ignition button to take pleasure in the Sportwagon. From behind the three-spoke, multi-function leather-rimmed wheel, the cabin looks and feels sporting even at rest. The wraparound dash is stylish, with deep cowls housing the big, bold speedometer and rev-counter separated by a multi-function display. Three secondary gauges — turbo boost, engine coolant temperature and fuel — are sunk into the darkened aluminium centre stack significantly angled towards the pilot.

Our test car was fitted with the optional power front seats with three-stage heating and leather upholstery (the Elegante normally has manually-adjusted seats with height and tilt adjustment and luxury 'Alfatex' fabric upholstery). Combined with the generous height and reach steering wheel adjustment and effective seat bolstering, a spot-on driving position is a given and the shapely and supportive seats proved to be as comfortable on long journeys as they were on short trips.

Push the starter button to fire up the engine, snick the lever into first and you'll soon discover that the 159 Sportwagon is dynamically capable of holding its own in its class. While its body says 'estate', the 159 Sportwagon drives as well as its rakish looks promise. It's a well-settled, easy to place car, with nicely-weighted, accurate steering and the kind of responses that keen drivers will appreciate.

However you treat her, the Sportwagon feels planted and stable with plenty of grip both from the chassis and from the Pirelli P Zero Nero 235/40 19-inch tyres. Pressed hard, the front end stays sharp and you need not hold back because the chassis embraces the challenge of a testing road. Brakes — vented discs all round with substantial 4-piston callipers at the front — are spot on.

The ride is quite firm; enough to favour the handling. But even with the large 19-inch alloy wheels fitted to out test car, the Sportwagon rode over the ever-worsening British blacktop happily enough and potholes were taken without any crashing. Refinement is notably good with road and wind noise well subdued, and the turbocharged engine not at all intrusive even when used in anger.

You won't want for space in the 159. Front seat passengers get plenty of leg and head room along with well-placed inner and outer armrests. There's decent legroom in the back, too, and four just-under six-footers can travel very agreeably. Within the passenger compartment itself there are various storage areas including a large glovebox and a temperature-controlled storage box within the front centre armrest.

However, if you're thinking about transporting large kitchen appliances then buy yourself a Volvo estate. This Alfa doesn't do DIY — her body's built for sin, not to put things in. The elegantly styled Sportwagon's boot is better suited to holding lifestyle luggage en route to Paris or Rome. That said, 445 litres of boot space isn't at all bad and it's accessed through a full-width, high-opening, top-hinged tailgate. There's also a very sturdy, no-nonsense and smoothly-working retractable luggage cover.

The split/folding rear seat is divided 60:40 and incorporates a small load-through hatch. Fold down the rear seatbacks (the seat cushions are fixed) and you'll be looking at a practical — although not fully flat — 1,235-litre load bay. In addition there's a number of thoughtful and handy storage bins in the boot area including two built-in lidded cubbies, a pair of hidden pockets in the side panelling, a couple of small stretchy nets, two boot lights and a 12v socket.

Alfa Romeos have always appealed to individuals and the 159 Sportwagon, badged with an emotive automotive Italian designer label — Giugiaro — is as eye-catching as any of them. Fronted by the instantly-recognisable Alfa shield, the Sportwagon looks good from pretty much every angle — and always attracts a second glance. Perfect, in fact, for Alfa males and females. — MotorBar