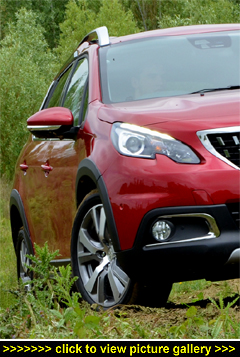 “The term ‘compact SUV’ may not
generate much excitement but when
you cast your eye over Peugeot’s
2008 you ‘get’ it instantly...”

IF A FULL-BLOWN 4X4 IS THE T-REX of off-roaders, then a compact SUV is the sleeker, more agile Velociraptor. Which makes 'macho' yesterday's news; today's ComSuv (Compact SUV) customers prefer taste to testosterone.

Following its recent facelift the 2008 now looks even more 'tasty': its sportingly handsome kerb appeal instantly catches your eye — and it really dazzles finished in the Ultimate Red or Emerald metallic. That said it does look good in white — the UK's favourite colour for the past four years.

The nose is defined by a wide, upright chrome-and-black grille flanked by artfully styled and very striking headlights that cut into the front wings and the edges of the slim, clam-style bonnet with great effect.

It's a clever piece of kit and you're in full control of it — leave it in its default Standard setting or, at any time, using the dial located on the centre console just behind the gearlever, select instead Mud, Sand, Snow or ESP Off. It's brilliantly user-friendly, and it works perfectly.

Getting behind the wheel of a 2008, you'll be pleased to know, is a very affordable business thanks to prices starting from Ł13,970 and topping out at Ł20,920 for the flagship GT Line model.

Power can be either four-cylinder 1.6-litre BlueHDi turbodiesel or three-pot 1.2 PureTech petrol. While there are plenty of good things about the turbodiesel, the more refined 128bhp (130hp) 1.2 PureTech holds the performance edge and its willingness to perform marks it out as the more entertaining to drive. For the record the diesel engine comes with 75, 100, or 120hp; the three-cylinder PureTech 'International Engine of the Year 2016' petrol units offer 82 as well as 110 and 130hp.

Big-hearted small-capacity engines are not just for compact cars; these days you'll also find them powering large saloon and estate cars. In the 2008, Peugeot's 128bhp three-pot is good for 124mph with crisp acceleration off the line to 62mph (in just 9.3 seconds). Away from the paper figures and on the road, it serves up lively mid-range acceleration with plenty of flexibility and grunt. And when you're pressing on, the clean-changing gearlever action makes it easy to keep the PureTech in its sweet spot.

And whereas the diesels only come with a five-speed manual gearbox, the 128bhp petrol unit is mated to a six-speeder which means unstressed motorway cruising. A week with MotorBar's team saw 46.3mpg recorded, and which is definitely good for your pocket; as too is the road tax — nothing to pay for the first year and then just an annual Ł20.

So, will the average driver get closer to the official combined cycle figure of 58.9mpg? As we tend to bomb around in our quest for 'real-life' consumption figures, the answer is quite likely Yes. Given the driveability the 1.2 three-pot brings to the ownership experience, we'd say that the near-50mpg we recorded was more than acceptable.

In keeping with all the current crop of Peugeot products, the 2008's classy cabin is a joy to behold; the cabin really is of upmarket calibre, with multi-texture and multi-finish trim and a smattering of satin chrome highlights with seats that are as comfortable as they look. And boy, do they look good.

Climb aboard and you realise something else too — it's very spacious with generous headroom. The seats are really inviting and almost whisper 'Sit in me!' Upholstered in a silky, mesh-textured fabric with two-tone black cloth-and-grey leather bolsters, they're deeply cushioned and truly comfy and supportive. Even four-hour-long journeys in chaotic pre-Christmas traffic didn't take the edge off their comfort.

Long trips using the cruise control were made even more relaxing by the nicely-angled left foot rest. Not only will the driver be totally satisfied, but so will anyone riding shotgun as they will have even more room to stretch out.

The highlight for many drivers will be Peugeot's i-Cockpit which comes with a compact sports steering wheel (with a very tactile leather rim) and a 7-inch infotainment touchscreen; the dials are viewed over the top of the wheel rim and not through it — which sounds strange until you sit in the car and then you think Great idea!

On top of that you'll enjoy a fine driving position and excellent all-round visibility that even without the optional reversing camera makes parking a no-brainer. Tick the Ł500 box for the Park Assist pack and you get front and rear parking sensors, a reversing camera, and an electronic parking jockey who will parallel park for you.

A nice touch: the climate control strip is separate from the touchscreen, which makes for easier adjustment on the hoof. There are also plenty of storage areas including cupholders, deep lidded bins, practical door pockets, plus a chilled glovebox.

Also extremely easy to use is the aviation style handbrake — with your palm on top of the flat paddle, close your fingers under it to release. And another chic touch: the laser-cut 'slashed' headlining with ambient backlighting and LED blue perimeter edging on the two dials either side of the driver's display, that along with a digital speed readout shows all the usual trip info including graphic SatNav guidance.

Exactly how you choose to fill your 2008's five seats is entirely up to you; if you're an empty nester the three back seats and accommodating boot will spell good news for days out with the grandchildren — however, if you'd much rather drive down to a Warner's no-kids-allowed hotel then it's equally suitable for two couples to travel in comfort.

Entry to (and exit from) the rear cabin is oh-so-easy. Once there passengers sit about four inches higher than those in front but still have a fist of headroom, plenty of foot room and good wriggle-room for leg comfort whilst sitting in well-padded seats. Big windows ensure panoramic views out, and although there is no central armrest those on the doors are well sited. And it's nice, too, to find genuinely usable door bins.

When it comes to carrying anything other than people, the 2008 is more than up to the task — its impressive 410-litre boot is regularly shaped for maximum usage; fold down the 60:40-split rear seatbacks and you create a capacious 1,400-litre loadbay. All of this within a compact on-road footprint measuring a smidgen over four metres.

An added bonus is that Peugeot have thought it through: they've made sure the back seats fold down totally flat for maximum practicality and that there's a low rear bumper-sill with no lip to lift items over — just slide the stuff in over the seamless cargo-bay floor all the way to the backs of the front seats.

And if you don't fancy getting your boot dirty, you can tow a braked 1,250kg. For the record, a space-saver spare wheel can be found below the boot floor. And there's an effective rear wash/wipe.

An options box worth ticking (Ł700) is that for the SatNav, which includes Connect SOS: it automatically makes an emergency call if the airbags inflate or the seatbelt pre-tensioners are triggered by an accident; alternatively, the driver can make a manual emergency or assistance call.

For an additional Ł250 you can specify Active City Brake that at speeds below 20mph warns of potential collisions and emergency brakes for the driver if he or she fails to react in time.

Recently we seem to have experienced quite a lot of foul weather which is, ironically, perfect when putting the cars through their paces, particularly when it comes to assessing the handling.

With its higher ground clearance and Grip Control system, and aided by all-weather tyres, the 2008 is well-prepped to tackle anything from muddy fields and tracks and flooded roads (all of which we had to tackle during our test) to that 'loved by kids everywhere' white stuff.

The 2008's steering is sharp — it feels almost kart-like-quick due to the smaller than average steering wheel that repays a small movement with a large correction — and it's a well-judged match for the nimble, confidence-inspiring handling. It's also great for parking!

Equally appreciated is the ride: comfortable — and agreeably so. The suspension will soak up impacts on pothole-damaged blacktop without ruffling you or your passengers. And, of course, the superb front seats provide some serious secondary cushioning.

Interestingly, figures just in show that the continuing SUV boom was the overwhelming trend of 2016, when SUV registrations set a new record by accounting for one in every four cars sold throughout Europe — that's 3.9 million SUVs and well up on 2015's 3.2 million.

Kerb appeal outside and classy ambiance inside and at a price that makes sense — that's the 2008's USP. Throw in a fine cabin and fabulous seats, a comfortable ride, precise handling, spacious people/load carrying abilities and low running costs and it's one you'll miss at your peril! ~ MotorBar