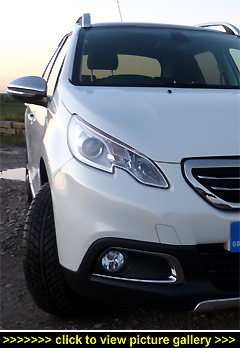 SIT IN A 2008 and it's easy to see why. For a start it's hard to believe that prices start at just Ł12,995. It's no exaggeration to say that the cabin looks and feels very Audi-like: black leather upholstery, a well-judged mix of trim, fine fit and finish, and a tangible aura of quality.

You sit commandingly, SUV-style, in well-bolstered seats that are as supportive as their sporty appearance promises. This may be a compact crossover but the front seats are of a good size, their comfort boosted by decent under-thigh support, height adjustment, fast-acting heating elements and height-adjustable belts.

Deep side glass and the 'see-all' driving position guarantees A1 visibility for the driver, both to the front and the side — and even through the rear screen. That said, most drivers will still be glad of the rear parking sensors and the graphic display on the infotainment screen when reversing.

For the record, the door mirrors might be slim and sleek but they still provide good views to the rear. Of course, you can always specify the Park Assist system and get your parking done — first time, every time — for you (it not only parks you but also drives you out of the space when you leave).

Topping it all is a panoramic glass roof that floods the cabin with natural light — a real lift to your spirits on gloomy midwinter days. A 2.54m wheelbase — within the 2008's wieldy overall length of 4.16m — ensures plenty of room for those occupying the back seats; seated higher than those in front of them, second row passengers enjoy decent foot-, knee- and legroom and there's enough width for three adults to travel side-by-side without any seat-rage.

Back in front, the instrument pack follows Peugeot's new 'head up' design discipline: the pair of main teardrop-shaped dials are bordered by thin blue-glow bezels and are viewed over the top of the multifunction (audio and phone) leather-wrapped wheel. This new set-up works beautifully and further enhances the quickly-set driving position.

Other great-to-use features include the large 7-inch infotainment touchscreen (with tablet-like flick-scrolling and menu navigation) set in the centre of the dash. The SatNav works faultlessly, is nicely intuitive and foolproof in its navigational commands. The upper fascia features a seductively silky 'must-touch' strip of what looks like woven carbon-fibre, which feels fab to exploring fingers.

The white-on-black paired speedo+fuel and rev-counter+engine temperature gauges couldn't be clearer, while whatever temperature air you dial up from the two-zone AirCon unit is delivered satisfyingly quickly and exactly where you want it. And you'll find plenty of storage cubbies (totalling 24 litres) along with those other must-haves for a nation of takeaway caffeine addicts: cupholders.

Most importantly of all — and pretty much essential these days — the driver's information display shows, amongst other driver-selected information, your road speed in large white digits.

The tailgate is wide and lifts fairly effortlessly to reveal a large boot (360 litres) with side bins and an extra 22 litres for stowing oddments under the boot mat — all accessed through a rectangular opening and over a low-loading, back-friendly sill.

If you need to ferry some cargo around, simply press the appropriate control at the top of the rear seatback; the rear seats fold themselves and in the process open up a versatile and flat-floored loadbay than can swallow 1,194 litres. Very welcome too is the spare wheel — albeit a space-saver but still far, far more desirable than one of the almost universally disliked puncture 'repair kits' supplied by many carmakers. And for that small step for common-sense and motorkind… Thank you, Peugeot!

Being a Peugeot there are, of course, engine and trim options to suit everybody: the well-specced equipment grades are Access+, Active, Allure, and two Feline models — Calima Ambience and Mistral Ambience. Engine choices are between a pair of petrol powerplants (1.2 82bhp and 1.6 120bhp) and three turbodiesels: a 70bhp 1.4, and a choice of two 1.6-litre units (92bhp and 115bhp).

A headline feature of the 2008 is Peugeot's clever Grip Control (standard on range-topping Allure and Feline models). Grip Control does precisely what its name implies — selected by the driver via a dial on the centre console, it offers, in addition to Normal and ESP Off modes, settings for tackling Snow, Off-Road, and Sand.

Better still, it works by making excellent use of features already fitted to the 2008 to adjust the torque to the front wheel with the best grip. And, unlike most 4WD systems, there's no handicap of extra weight and mechanical complications.

To maximise this wider-ranging ability, more appropriate Mud & Snow tyres (which have special 'StabiliGrip' blades for enhanced tread contact) are fitted to Grip Control versions which, incidentally, also feature a raised ground clearance. All of which makes the 2008 more than able to take on our ever-degrading British roads, particularly during the 'white' season.

The 1.6-litre e-HDI 115bhp turbodiesel fitted to our Feline test car is a sweet thing to have under the bonnet: with 199lb ft of torque, its gutsy power is served up willingly from pull-away to the important mid-range where most real-world driving takes place. Overall its responsiveness makes any driving — in traffic, along quick A/B roads, and cruising motorways — a breeze. Partnered by a light, positive clutch, the slick six-speeder manual 'box adds to the 2008's driveability and guarantees minimal effort in the cut and thrust of the city.

Top speed is a mile-eating 117mph; keep your foot to the floor and you can accelerate from standstill to 62mph in a satisfyingly crisp 10.4 seconds. A week's pretty hard driving saw a recorded average of a truly brilliant 60.4mpg. That's without trying to drive economically; just 'keeping up with traffic' — the default driving style of the majority of UK drivers.

With some attempt to conserve fuel, and given the official consumption figures (70.6 combined; 60.1 urban; and 78.5mpg touring), lighter-footed drivers should be seeing the 'sixties' on a regular basis. Other core running costs are also minimal: courtesy of just 106g/km of emitted CO2 there's no road tax payable in the first twelve months; thereafter it's a mere Ł20 per year.

The 2008 is eye-catchingly styled, notably so the sculpted bonnet and wings; adding interest at the front are the precisely designed 'tech'-look headlamps and, at the sides, a 'roof wave' that emerges above the rear cabin. At the tail there are stand-out rear 'claw' effect LED lamps.

You steer the 2008 using one of the smaller diameter wheels first seen in the 208 — and it's sharply responsive; the weighting is fine, and it's equally good to use whether you're pressing on some through the twisties or threading through a maze of commuter traffic. And the elevated driving position makes it a breeze to place accurately.

Progress is quiet and refined along A and B roads as well as on motorways. At the UK's legal limit, the 2008 is rock-steady, reassuring, and relaxing to travel in be it as a passenger or the pilot. But do keep an eye on the speedo as its natural 'gait' in top gear is an unruffled 85mph.

Its road manners are civilised; you're hardly aware of any body lean during cornering and vented discs at each corner provide no-nonsense stopping from any speed. Better yet, the 2008 takes potholes and other driver-unfriendly road blemishes in its stride. And there's peace of mind every trip knowing that whatever the road conditions underfoot, your 2008 has a secure 'grip' on them.

Spend a day in the company of a 2008 and you'll appreciate why motorists are clamouring to own one; spend a week behind the wheel and, like us, you'll be very reluctant to hand it back.

This new crossover from Peugeot comes with a winning formula, meeting the modern lifestyle demands of today's drivers with panache. You want family values and versatility? The 2008 delivers. You want urban street skills? The 2008's compact city-friendly design obliges. You want all-weather security and the ability to cut it in the country? Grip Control gets it done. And you want satisfaction from your time behind the wheel? The 2008 gives you that too.

Add to that its premium looks, competitive pricing and affordable running costs, and it's a crossover you simply can't say No to. — MotorBar