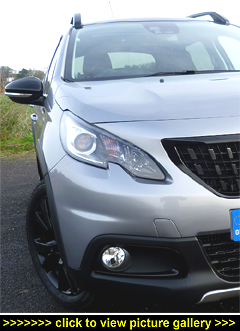 “There’s a theory going round that
the worse our roads get the more
drivers are buying quasi-SUVs —
in fact there’s now a booming
demand for compact versions that’s
verging on becoming a craze...”

THAT SAID, YOU CAN'T BLAME drivers for clamouring for them, especially when there's an award-winning Engine of the Year under the bonnet. Powering our family-friendly 2008 test car was one of Peugeot's turboed 128bhp triple-cylinder PureTech petrol units — the same as has scooped the award every year for the past three years.

Of course, should you prefer a turbodiesel there's nothing to stop you choosing one of Peugeot's clean BlueHDi units; these come in 75, 100 and 120hp flavours. In addition to the 128bhp (130PS) three-pot, unleaded fans also have the option of 82 and 110hp power outputs. Trim levels are Access A/C, Active, Allure and GT Line — and entry into the 2008 'club' starts from just Ł16,300.

While many small SUVs look like they should be able to scale every mountain, few actually can — true, most do offer raised ground clearance and a commanding driving position, but many only come with two-wheel drive. Not a problem for the 2008 because Peugeot has come up with a clever twist on all-wheel drive — it's called Grip Control.

Grip Control maximises traction on slippery surfaces and in low-grip conditions by changing the torque distribution and managing the traction control system to get the 2008 out of difficult situations.

It provides drivers with a selection of driving modes, each tailored for a variety of surfaces: in addition to Standard there's Snow, Mud, Sand, and ESP Off which disconnects both dynamic stability control and traction assistance to enable total control for the driver at speeds up to 30mph.

We've spent the past week behind the wheel of the range-topping GT Line 128bhp PureTech model that comes with all-the-bells-and-whistles. Driving one of these away from the showroom will cost you Ł20,800, but the must-have Grip Control is standard-fit.

The sporty-looking GT Line treatment adds gloss-black external detailing while at the tail there's a sports spoiler and 'claw' effect LED rear lights that wrap around and cut into the back wings. The whole show is signed-off by a set of 'Brilliant Black' 17-inch alloy wheels.

Extra ground clearance is one of the core benefits of moving up to a SUV and backed by a well-damped, longer-travel suspension set-up the 2008 makes a fine vehicle for tackling today's mortar-bombed tarmac, which generally it rides over without flinching — and neither will you! The other major plus of its 'jacked' stance is the vastly improved visibility and this in turn makes for stress-free driving in traffic — as well as more people-watching opportunities for your passengers!

Riding in a 2008 is a pleasant experience courtesy of its 'all glass' cabin whose deep glazing is capped by a panoramic glass roof so everyone aboard sees more of what's going on in the world outside.

There's a fist of headroom and the sporty front seats with their pronounced bolstering really hold you in place. Easy stepless backrest adjustment is another 'plus' and the seat heating (3-stage) is brilliantly quick. Smartly finished in red and grey fabric with red detail stitching, the seats kept us comfortable for hundreds of miles.

The footwells are of a good size too, which is handy should you need to drive in boots or even wellies after walking the dog in the woods. The clutch-foot rest is also well-judged.

The driver experience takes a step-up in a 2008 thanks to Peugeot's i-Cockpit. If you haven't seen it before, this is basically a heads-up style full instrument panel combined with a flat-bottomed and smaller than usual steering wheel (but perfectly wieldy, with perforated leather work areas) whose compact size lets the driver view the instruments over its top rim and not through it.

The rest of the cabin is defined by classy styling and sporty touches that include aluminium sill kick-plates, aluminium sports pedals, an intriguing and tactile 3D finish to the fascia, nice detailing to switchgear and door handles (the high-gloss black front door pulls feature red pin-striping), an aviation-style handbrake (easy to use: palm on top then curl your fingers under to release), GT Line carpet mats, and blue ambient lighting running lengthways down the sides of the glass roof. And you'll find ample in-cabin storage for a family's bits and pieces.

Naturally the 2008 is 'connected'. A seven-inch infotainment colour touchscreen is home to SatNav; MirrorLink and Apple CarPlay are incorporated for smartphone linkage plus there's voice recognition for radio, navigation and telephone functions. On-screen graphics are sharp, as too is the 3D mapping, and foolproof directions are given along with handy graphic prompts on the driver's trip display between the main teardrop dials for revs and speed.

A large digital speed readout is also shown, along with the posted roadside speed limits although these are displayed in the top left-hand corner of the maps. Bluetooth and a DAB digital radio are also present and correct. Below the touchscreen sits the control panel for the 2-zone automatic AirCon — and you don't need to go through the touchscreen to adjust the heating and ventilation. Yay!

For many owners the most important feature of the 2008's rear cabin will be the wide-opening back doors that as well as permitting easy entry and exit also make fitting a child seat a piece of cake. Adults seated there won't be disappointed either because the seats are upholstered in the same comfortable fabric as the fronts; the backrests are set at a relaxing angle, foot- and knee-room is good and there's air between heads and the glass ceiling which runs back a long way and floods the interior with light. For shade-lovers a powered opaque sunblind will keep the sun's rays at bay.

The seats are also set high off the floor which ensures not only expansive views out — even through the windscreen between the front seatbacks — but ensures good lower leg comfort. Magazine pockets take care of that latest blockbuster novel you bought for the beach, and there's room in the rear door bins for meaningful oddments.

Parents will also appreciate the door child locks being operated remotely from the driver's door panel. For a four-metre-long player, the five-door 2008 manages to fulfil the 'five-seater' tag its five headrests promise — and a third-in-the-middle is doable.

Three-pot engines have established a rep for being revvy and the 1.2-litre PureTech triple is all of that; backing its 128bhp with a meaningful 169lb ft of torque and partnered with a manual 'box that's stacked with a well sorted set of ratios, making the most of the power in hand is never a chore — acceleration from zero to 62mph is done and dusted in a zippy 9.3 seconds, while the 124mph top speed makes for smooth cruising at the legal 70mph.

On the move the petrol triple shows just why many drivers prefer petrol over diesel, despite the greater torque that turbodiesels dish out — dropping a cog in the three-pot generates an immediate hit of oomph but what's rather, although not entirely, unexpected is the award-winning 1.2-litre's refinement.

Sure you'll hear that affable three-cylinder 'thrum' when working it hard but back off and it immediately retreats into the background, making long trips at cruising speeds extremely restful.

A nice bonus, even when compared to the legendary economy of diesels, is the 1.2's real-world economy — the Combined Cycle comes in at 58.9mpg but few cars ever get close to their official figures; that said, the 128bhp three-pot came up trumps, recording an overall average of 52.7mpg. And regular drivers won't have to hope too hard to better that!

For a tallish car the big surprise is the fluent way the 2008 drives — with its sharp steering and agile handling it feels like a nicely-sorted supermini. The compact steering wheel highlights the 2008's fast steering responses because a small movement of the rim brings a large correction at the nose, making it wieldy round country lanes and perfect for city manoeuvring and parking. And it makes you smile!

Ever noticed how luggage has an alarming habit of expanding to fill the space available — and then a bit more besides? However, that shouldn't catch out the 2008 owner whose boot will take a very practical 422 litres below the parcel shelf-style luggage cover. Drop the 2/3:1/3-split rear seatbacks and there's more — a great deal more: a cavernous 1,400 litres with a seamlessly flat loadbay floor.

Loading is kept hassle-free by the floor being flush to the rear load sill with no lip to lift cargo over, while providing quicker access to items at the tail end of the boot is the fold-back last third of the luggage cover.

Overall the 2008 meets and satisfies a whole range of cargo needs whether for young couples, empty-nesters, single parent families or retirees, making it an easy car to live with however you use it. And once those 1,400 litres are taken — by people or packages — you still have the U-haul option: you hook it up; and the 2008 will tow a braked 1,250kg.

The 2008 grabs you on two fronts: on one side it gives you family-friendly comfort with low running costs, plenty of style, and loads of kit; on the other it serves up an enjoyable driving experience with the safety net of greater grip in dicey conditions. You really can't lose, can you! ~ MotorBar