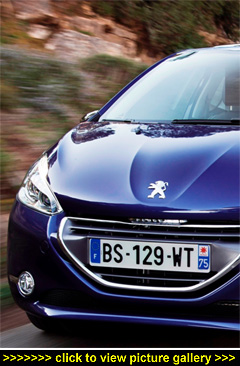 “The launch of the new ‘less is
more’ Peugeot 208 three- and
five-door supermini marks the
introduction of one of the most
important new Peugeots. Not only
does it come with less weight
and cost less money but it has
more engine options, more fuel
economy, more interior space
and potentially more desirability...”

IT SHOULD ALSO BRING MORE CUSTOMERS and more sales to Peugeot. For current Peugeot fans, this new 208 replaces the 207 hatchback range with another far better. However, 207 SW estate and CC coupe-cabriolet models will continue in production for a while.

In the UK sales of the lighter, shorter, cheaper-to-buy-and-run and easier to park 208 hatchbacks begin on 28 June — final prices have yet to be confirmed but provisionally they will cost between Ł9,995 and Ł17,495. Five trim and equipment levels will be on offer: the base Access, followed by Access+, Active, Allure and the range-topping Feline.

The defining feature of the new 208 is the reduction in weight over the 207 hatchbacks. Weight-saving has been made in all areas, from the drivetrain to the body construction, resulting in 114kg being slimmed off. Impressive when you know that 208 actually uses the same platform and construction architecture as the 207, but revised inside and out from nose to tail.

The overall length has been marginally reduced so the 208 looks more compact and consequently it's visually easier to park. The front and rear bumpers have been slimmed down, and the 208 looks less heavy and bulbous. Plus the weight loss makes it more agile on the road, improves performance, reduces emissions and improves fuel economy.

Styling changes have done away with the overpowering droopy nose and bonnet design of the 207; in its place is a new and more refined grille. The 208's sides are more curvaceous and the car looks both more athletic and less ponderous. Signature LED lighting is used to good effect front and back.

Inside there's more passenger space, especially knee room in the rear, and the boot is marginally larger (boot / load space: 285 / 1,076 litres). Also new is a smaller diameter steering wheel which gives the driver more room to manoeuvre — this has been in conjunction with moving the instrument panel higher on the dashboard so the dials are read not through, but over the steering wheel. It takes a little time to adjust to this layout but it works.

Most models come with a 7-inch touchscreen mounted almost in a freestanding way on the centre of the console. This screen is used to access various functions: radio, Bluetooth, sound system, the on-board computer and, where fitted, the SatNav. It will also be used to accommodate a huge range of Apps covering traffic conditions, fuel stations and fuel prices, parking spaces, Michelin Guides (restaurants and hotels), weather forecasts and even Yellow Pages. When launched, this paid-for system will operate 24/7, covering 17 countries.

208 customers will also appreciate the wider range of even more fuel-efficient engines. The efficiency of the HDi diesel units and the VTi and THP petrol engines has been reinforced by the arrival of a new generation of three-cylinder petrol engines.

At launch the comprehensive engine line-up offers the following diesels: 1.4 and 1.6-litre turboed units (68, 92, and 115bhp). Most use Peugeot's e-HDi micro-hybrid Stop and Start system and emissions begin at a low 87g/km and rise to a still very efficient 99g/km. Fuel economy ranges from 74.3 to 83.1mpg. Diesel sales in this sector are relatively small because of the higher price of the engine and fuel over petrol units, which is why only around 26% of 208s sold in the UK (mostly to businesses) will be diesel powered.

Far more relevant to 74% of UK 208 customers (especially those who didn't buy a 207 because there wasn't a low-CO2, high-fuel economy unit on offer) will be the new petrol engine line-up.

Driving the new 208s on the hilly roads around Lisbon last week gave the new models a lively workout. Immediately likeable was the new styling inside and out, and I particularly liked the smaller steering wheel and raised instrument panel design. The 208 benefits very noticeably from the weight loss over the 207 hatchbacks — it has come to life; it's agile, the handling is more predictable and the steering responses sharper and less ponderous.

The suspension absorbs most bumps and potholes without any great loss in ride comfort and the best performance in that department came from the Active spec's standard 15-inch wheels rather than the 16-inch rims used by higher spec versions. The Active level also comes with most of the kit most people will need which is why it will be most popular for most customers.

I drove a number of the engines on offer but it was the 95bhp 1.4 four-cylinder petrol powerplant that most impressed me because of its extra torque — and well worth paying the extra Ł500 over the next best-selling 82bhp 1.2 three-cylinder petrol unit.

Both could do with having a smoother action six-speed manual 'box rather than the current five-speeder, which would also reduce engine revs at higher cruising speeds and, I suspect, improve fuel economy even further.

That noted, the 1.2 three-pot is a bright and lively engine and certainly a worthwhile addition to the range: it will suit drivers who mainly cover short trips and the occasional longer motorway journey. For the record, over the same test route the three-cylinder 1.2 recorded 38.2mpg; the four-cylinder 1.4, which had to work less hard up hills and during acceleration, returned 41.3mpg.

Against? Thick front-quarter pillars limit visibility; the worst of the potholes will be felt in the cabin. Plus points are that the 208 is better in all areas than the 207 hatchback it replaces: lighter weight, more agile, sharper handling, wider range of engine options, better rear seat knee room, and a quality interior.

No doubt that the slimmed-down, sharper looking and roomier 208 benefits from all the changes over the 207 and should generate a significant increase in sales for the 208 over the ponderous 207. In addition the new three-cylinder petrol engines will also benefit buyers, so it looks like a win-win situation for Peugeot and their customers. — David Miles