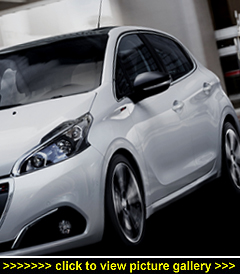 “It’s a mistake to assume that
everyone wants the fastest hot-hatch.
Some dig the looks of the go-fastest
versions but would actually much
prefer one without the blistering
power...”

SO IF YOU FANCY the 208 GTi's handsomely hardcore lines and sporty cabin but not the tyre-squealing performance, Peugeot now has the answer: the new GT Line. These models are a win-win insofar that while still looking coolly desirable inside and out, they're usefully cheaper to run than the full-blown 205bhp GTi models.

Peugeot have indeed done a fine job with the GT Line — usually it's the three-door models that have the catwalk cred but this time it's the five-door that takes the cake; it looks nicely planted and dynamically 'breathed on'. Certainly enough to justify the 'GT' tag.

Contributing to the GT Line's kerb appeal is crisp styling, sporty detailing, a jutting jaw-line fronted by a wide red-and-black grille edged by long wraparound headlamp units, and a set of classy five-arm 17-inch alloys the like of which you'd expect to see gracing a go-faster Audi, all of which ensures the good-looking 208 stands out from the supermini crowd.

The other core characteristic of the new GT Line cars (in the 208 pecking order they sit immediately below the hot-hot GTi models) is that while they look as though they could have 200+bhp under the bonnet, there's actually a less expensive (insurance and road-tax) and less thirsty powerplant moving things along: anything from a 97bhp 1.6 BlueHDi diesel unit to a 162bhp petrol engine.

This past week we've been driving the 97bhp BlueHDi '100'. But just because it's an environmentally-friendly shade of green doesn't mean that it's not got some oomph waiting on your right foot.

While 97bhp isn't (obviously!) awesome, the BlueHDI's cheerily willing torque — a punchy 187lb ft from 1,750rpm — will help put a smile on your face. You'll also be glad of the five-speed box's palm-fitting, chrome-and-leather gearknob and clean change action. Top speed is 116mph and it will hit the benchmark 62mph in 10.7 seconds from standstill.

While the official Combined Cycle fuel consumption figure is 80.7mpg, a hard week's testing over an eclectic mix of roads including quite a lot of stop-start trips saw an amazingly good overall average of 58.3mpg recorded. And — as we regularly say — you probably could, and most likely will, do better than us! Also contributing to the low running costs is the BlueHDi 100's VED-dodging 90g/km emissions that ensure that you never pay the government a penny in road tax.

Pull open a front door and you'll find a very inviting cockpit; in particular the shapely and strongly bolstered sports-style front seats, upholstered in a mix of 3D-effect fabric and faux-leather, that look great to sit in — and sure enough, they are, keeping you perfectly in place however hard you're driving and comfortable too courtesy of some very effective back and shoulder support.

Your front passenger will appreciate that they too get a height-adjustable seat, good elbow room, and a fist of headroom. The cabin is smartly finished with plenty of high-gloss black trim (touchscreen surround, centre stack, instrument pod, etc) with a chic silky woven-effect satin black 'skin' clothing the fascia, all offset by sporty red overstitching to the dashboard, seats, traditional 'yank-up' handbrake grip, and perforated leather wheel rim — there's even a red stripe running through the seatbelts. All very smart.

But then these latest generation French cars are now as smartly designed and built as German Audis. Naturally there's a seven-inch touchscreen centre-field in the dash, and Peugeot's modish i-Cockpit with its trademark flat-bottomed, small-diameter sports steering wheel with the speedo, rev-counter and secondary dials in a pod dead ahead of the driver — which puts them perfectly in your eye-line.

Sandwiched between the rev-counter and speedo is a driver's information display that shows all the usual data along with that all-important, licence-protecting digital speed readout. Navigating anywhere is hassle-free thanks to sharp 3D mapping, full 7-character postcode entry, and unambiguous spoken directions. You can also access the driver's computer and your phone without taking your hands away from the multifunction wheel.

While control and command functions are mostly operated by your fingertip via the touchscreen, Peugeot have kept the automatic dual-zone climate control system as a stand-alone feature with traditional switches sited beneath the screen. Something many drivers will like as it's less distracting than doing the same thing using a touchscreen whilst you're on the move.

Connectivity is managed through MirrorScreen and CarPlay — CarPlay is useful in that it not only mirrors apps on the screen but it also features voice control which allows phone calls, text messages, music and maps to be used without the need to take your eyes off the road. You also get a DAB digital radio, CD player, Bluetooth connectivity, an Aux-in jack and USB ports. And in the upper section of the 'cave' at the base of the centre stack you'll find a mobile holder.

A stability control system is also standard and an extra £250 buys Active City Brake — designed to reduce the risk of urban crashes at speeds of less than 20mph by automatically emergency braking should the driver fail to react in time.

For the record our press car was fitted with several must-have items: a panoramic glass roof with 'blackout' sunblinds (Ł400), Park Assist (an automatic parallel parking system, for Ł300), and SatNav with DAB radio (Ł450). All boxes definitely worth ticking.

While the 208 falls into the supermini sector, inside there's more than enough room to swing the proverbial moggie (not that one would!) which means decent passenger accommodation both up front and in the rear — and the P-word here isn't just 'Peugeot', but 'practicality' because the boot is equally welcoming when it comes to your passengers' luggage. Cupholders and real-world sized storage bins can be taken for granted.

You don't expect loads of luggage space in a supermini but the 208 comes up trumps here too with its regular-shaped 285 litres matching the best of its rivals. And while there is a lip to load over, it's not a problem. For those occasions when more space is called for, the 208 delivers: lower the 2/3:1/3 split rear seats and you'll open up a 1,076-litre loadbay. That's bigger than the average supermini, Yogi!

More good news for that 'hope it never happens to you' event — Peugeot give you a proper space-saver spare wheel. And for those who prefer to keep their loads outside the car, the 208 will tow a respectable braked 1,150kg.

The five-door's extra pair of doors are for more than just show — open either one and you'll confirm that there's ample accommodation for two adults (three side-by-side, although a bit of a squeeze, is still doable); and note that those travelling in the back do so with air above their heads as well as around their knees. Not always the case with four-metre-long superminis.

Once there — getting in/out is easy — your passengers can enjoy decent views out whilst settled back against nicely-angled seatbacks; and enough cupholders to park their take-out Americanos.

The sportily-small steering wheel is a whiz when it comes to getting the 208 to change direction — it makes the front-end feel bracingly brisk and allows for precise placing of its body with minimal physical effort, and even though it's most delightful when partnered with the 205bhp of the GTi its appeal is not wasted on the 97bhp BlueHDi.

The front-end grips gamely, there's decent feel through the rim and decent body control keeps it composed and wieldy even when punted — meaning you can safely have some fun in this agile hatch.

Placing and manoeuvring the 208 is easy-peasy and that's not just down to the i-Cockpit's small steering wheel, but also the good visibility from behind it and the deep glasshouse which provides clear views out, even to the rear.

And while you can indeed have some fun behind the wheel of this 208, you won't be the only one smiling because the ride — traditionally a Peugeot strong point — is well-damped, tackling imperfect blacktop with the fluency you'd expect from a larger car; show it a cruise and will run smooth and true while keeping your passengers happy.

Hot-hatch styling desirably enhanced by affordable running costs — that's the GT Line's USP. Try one and you'll be impressed: not only does it represent good value, stretch a gallon of fuel a long way and have a likeable supermini character, but it's also extremely easy to live with. And reminds you that driving is actually meant to be enjoyable! ~ MotorBar