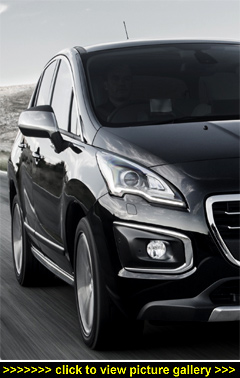 “Everybody’s doing it, doing it...
Crossing over, that is. Crossover
sales are booming and these
practical and versatile two-and four-
wheel drive dual-purpose vehicles
that marry the best of SUV and
hatchback styling and features are
now relentlessly taking over
UK roads...”

A HUMUNGOUS HIT WITH MOTORISTS, crossovers come in all sizes and wearing a wide range of badges. Peugeot's contenders, both small (2008) and medium (3008) have become formidable players — hardly surprising because in addition to versatility, quality and a comprehensive range of economical engines (from petrol and turbodiesel to Peugeot's 'world first' cutting-edge diesel-electric hybrid) the one thing they stand out for more than anything is their panache.

And drivers, it seems, value 'panache' even more than they love value-for-money; and Peugeot's extensively restyled five-door, five-seater 3008 gives them plenty of both. Plus, supplementing its standard front-wheel drive is an impressively clever bit of electronic wizardry called Grip Control.

Instead of handicapping the 3008 with all the extra hardware of a conventional 4WD system — which, let's be honest, for most of the time is never required — Grip Control makes good use of already-fitted electronic components to provide the best possible traction from both front wheels whenever and wherever conditions demand it.

When equipped with Grip Control, the 3008 is also fitted with Michelin 'Mud & Snow' tyres which have special 'StabiliGrip' blades that maintain maximum tread contact with the driven terrain for that sure-footed feeling — they're also excellent for towing (a braked 1,300kg) and outdoor activities in all conditions.

The driver can set Grip Control to its Standard mode and let the intelligent system itself decide when and where to intervene or, using the rotary control knob on the centre console, dial-up the mode they would prefer to use for specific conditions: Snow; All Terrain; Sand; or ESP Off.

Power-wise, the most popular engine in the 3008 line-up is the 115bhp four-cylinder 1.6 HDi diesel. We recently put one — a manual gearbox specced version — through its paces but if you're a more 'hands-off' kind of driver then you can have the same unit in combo with an electronic automated gearchange (EGC) which offers both superior economy (official average: 67.2mpg) and lower emissions (110g/km).

Other engine choices serve up power outputs ranging from 115 through to 200bhp with emissions running from a low, tax-cheating 88g/km for the 3008 Hybrid to between 110 and 159g/km for the HDi diesels and 155-193g/km for the petrol-powered versions.

Settle behind the wheel, pull away —and it's easy to understand why this 115bhp unit is the first choice for many 3008 customers. It's a 'nice' powerplant, this turbodiesel, delivering 199lb ft of torque from 1,750rpm which in partnership with six well-spaced ratios means a consistently effective response to your right foot.

For those who drive their cars properly, shifting up and down through the manual 'box is all part of the satisfying driving experience and certainly no hardship courtesy of a crisp and clean change action — the short gearlever is perfectly sited close to 7-o-clock on the flat-bottomed wheel's good-to-grip leather rim. Make good use of the manual 'box and your progress in the 115bhp 3008 will be fluent and more than quick enough.

Officially the 115bhp HDi model's Combined Cycle fuel consumption is 57.6mpg (48.7 'Town' and 64.2mpg 'Touring'). A week's hard driving, which included plenty of city centre work as well as three stop-start hours crawling along on the M20 (thank you Operation Stack!) saw our real-life test average coming in at a very satisfactory 49.1mpg.

You won't pay any road tax for the first year but then it's Ł110 every twelve months. Even so, and considering the scope for scoring 50+mpg on longer 'touring' runs, the 115bhp HDi's overall running costs are low.

For many owners what's at the 3008's tail will be of prime interest — not only is there a high-lifting, two-section split tailgate offering super easy access to the 512-litre boot, but the boot itself is über-versatile, not least due to its triple-height boot floor.

In the intermediate position it sits level with the open and dropped lower tailgate (which can safely bear 200kg) so hassle-free loading and unloading is a given; in its top position it creates two separate boots with the upper section's 'floor' level with the top edge of the closed split lower tailgate; configured thus it keeps the lower boot completely isolated from the upper section. In it's lowest position it creates an equally handy very deep boot. When not in use, the load space cover store is easily removed and stored under the floor.

To max out the cargo bay, use the release levers in the boot (or the catches at the top of each seat). The 60:40-split seatbacks fold down at the same time as the rear seat bases retract, proving a seamless and totally flat loadbay floor that will take 1,604 litres of luggage or cargo.

Extra-long items (as long as 2.62 metres) can also be carried by folding down the backrest on the front passenger seat to its 'picnic table' position. A regular load-through hatch in the larger rear seatback section behind the centre armrest is ideal for accommodating skis and the like.

Other thoughtful touches include a removable boot light-cum-electric torch with a 45-minute life when removed, side pocket bins and sturdy bag hooks. Storage within the main cabin is equally impressive, totalling almost 50 litres.

The largest of these cubby-holes is the huge storage bin (also home to the Aux-in and USB sockets) beneath the central front armrest — it's chilled and lit and you can easily 'lose' a 1.5-litre bottle within its 13.5 litres. Those seated up front get deep and wide 7-litre trays in their doors; and the two 'secret' bins in the rear floor (3.3 litres on the left and 3.8 litres on the right) are perfect for valuables or the kids' gaming kit.

The 3008's cabin is defined by its strong sense of panache — comfortable well-shaped and supportive seats are upholstered in smart fabric, and their firm but non-intrusive bolstering (and especially neck-friendly headrests) ensure tireless travelling on both long and short journeys. Set well off the floor, with ample space in all directions, they also provide excellent visibility over the bonnet and to the sides.

For the driver that also extends to unhindered views in the auto-dimming mirror of what's going on behind; made better by the full-width rear screen. Seat adjustment is manual but none the worse for it as height adjustment is provided for both the driver and front passenger, as too are height-adjustable seatbelts.

The driver enjoys a clearly defined individual 'cockpit' which complements the commanding view from the helm — a flat-bottomed, leather-wrapped, sporty three-spoke wheel with perforated work areas and well-shaped thumb cut-outs. Most importantly, the 3008 is easy to place accurately on the road.

The upmarket trim features slick laser-engraving and plenty of neat satin chrome finishing that contribute to the upmarket ambiance. Thoughtful touches include the multi-seatbelt warning panel above the rearview mirror (for rear-riding youngsters), one-shot windows, powerfold on-demand (and automatically on leaving) door mirrors, and the brilliant (literally!) full-length panoramic glass roof that stretches from the roof's leading edge all the way back to above the rear headrests and floods the cabin with light.

While the glass roof is tinted to limit light and heat penetration, should the sun's rays be too bright you can always close the powered sunblind with a button-push and chill out behind the front tinted window glass and privacy glass that runs back from the B-pillars. At night the natural light is replaced by an ambiance LED in the roof console.

Other strong likes include the absolutely first-rate head-up display that puts key information — current speed (shown in white), speed limiter (orange) and cruise control (green) — exactly where you need it most; in your line of sight. We've said this before but it bears repeating: every car should have this as standard; in fact, like seatbelts, it should be compulsory!

Also deserving a mention is the retractable screen for the SatNav that's all the better for its crisp 3D mapping and power-adjustable tilt.

And although not everybody loves them, the 3008's electric handbrake is not only foolproof to use but it engages automatically when you switch off the engine; when the engine's running and you move off it also releases automatically as you engage a gear and press the accelerator. A Hill Assist function is incorporated so even reverse parking on a slope is hassle-free.

Also making life easy is a reversing camera as well as front and rear parking aids (there's even a space measuring system for finding you a parking bay that fits the 3008's 4.37 metre length), cruise control and a speed limiter, dual-zone climate control, hands-free Bluetooth for smart phones and music player connectivity, tyre pressure monitoring, and auto lights and wipes.

All in all the 3008's classy interior outdoes all of its rivals, and it's a treat to travel in whether you're being driven or turning the wheel.

Access to the bright and airy rear cabin is straightforward and once seated rear passengers sit several inches higher than those up front. They're also 'one-up' in another way: they get retractable roller mesh blinds for their side windows. The backrests are set at a relaxing angle, there's oodles of foot room (even for a third passenger in the middle) and the centre armrest is wide enough for amicable sharing. Views out are uninterrupted with added interest provided by the glass ceiling.

One could summarise the driving dynamics by saying nothing more than that the five-star safety-rated 3008 is both easy and pleasing to drive. Because it is; press on, even with a full load of cargo or people, and it's always confident and predictable. It rides well, steers well and stops well. So well you just take it all for granted. And, of course, Grip Control is always there for you — even on snowy slopes.

Whether it's a top-of-the-tree Range Rover or a budget-priced Dacia Duster, crossovers are rapidly becoming the world's dominant automotive species. Perfectly sized for modern-day use, the 3008 is smart inside and out, comfortable, easy to live with and economical — and perfect for today's multifaceted lifestyles. — MotorBar