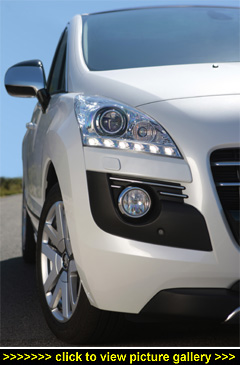 “Micro-Hybrid. It certainly sounds
very futuristic. But in today’s real-
world, is Peugeot’s e-HDi micro-
hybrid 3008 significantly more fuel
efficient? The answer, it seems, is
all in the gears...”

AS A CROSSOVER, the 3008 is part-family hatch, part-SUV and part-people carrier and seats a traditional five — more than enough for most customers' requirements.

Prices range from Ł17,195 to Ł23,995 and should you prefer to have superior traction there's the option (Ł470) of Grip Control — Peugeot's clever electronic differential which alters the torque split and driveshaft speed between the front wheels to obtain maximum traction on a variety of surfaces including snow and sand. 3008 HYbrid4 models (£26,995 to £28,495) have four-wheel drive as standard.

Sitting between Peugeot's popular 1.6-litre petrol engines and the 2.0-litre diesel and diesel/hybrid power units this e-HDi model is, I believe, the best choice for the 3008. It uses a 112bhp 1.6 turbodiesel and its fast-acting stop/start system makes use of a micro-hybrid starter motor/alternator.

Drive is to the front wheels through PSA's EGC six-speed electronic automated transmission, which is a tad ponderous and not very smooth in operation. The EGC's 'brain' controls the optimum gearchange points for the speed of the engine and helps maximise CO2 emissions and fuel economy.

The 1.6 e-HDi micro-hybrid returns, officially, 57.6mpg in the Combined Cycle — a week behind the wheel covering all types of driving saw 46.2mpg recorded on the trip computer.

Tailpipe emissions with the top-trim Allure are 127g/km — higher than the entry-level Access version's (122g/km) because of the Allure's larger 18-inch wheels, supplied in place of the Access's 17-inch items with energy saver tyres.

The range-topping Allure specification is totally comprehensive but if your budget demands it there are lesser levels: Access, Active and SR. Go for the Allure, though, and you'll find it has just about everything including Peugeot's very good head-up display system and a full panoramic glass roof.

The only item of specification which didn't work for me was the large 18-inch alloy wheels which, as usual, compromise the ride quality even though the 3008 is inherently a comfortable, well made, five-seater car with a classy interior.

The rear passenger legroom isn't the best in this crossover sector but by no means is it small enough to put me off buying one. The clever split rear tailgate gives easy access to a large boot area. Boot space of 432 litres is available with the rear seats in use; with the rear seats folded flat the volume goes up to an excellent 1,604 litres — impressive in a vehicle of just 4.3 metres in length.

One of the reasons the 3008 is so popular is because of the load space it provides, whether used for work or leisure, or for the less able who need to carry something like a wheelchair. These users will also appreciate the EGC automated clutchless gearbox.

But the core point of this test is the 1.6 turbodiesel engine and its micro-hybrid e-HDi system. With 112bhp and 199lb ft of torque available from 1,750rpm, the four-cylinder unit is a willing worker although the standard-fit but not-so-slick EGC electronic automated transmission does this Peugeot no favours.

The micro-hybrid stop/start system, however, is commendably fast in operation and not at all intrusive for the driver. You stop; the engine stops. You go to move and the engine eagerly spins back to life, so there's no worries about being left at the traffic lights or teetering out from a side road into faster moving traffic. It's relaxing to use and impressed me.

No so quick off the mark is the six-speed EGC system, which gives zero to 62mph acceleration in a tardy 14 seconds although at 110mph the top speed is legally fast enough.

So, does the e-HDi system save on fuel? Well, the same 1.6-litre turbodiesel with a manual gearbox but without the micro-hybrid stop/start function officially returns 55.4mpg in the combined cycle and costs Ł750 less to buy. The 1.6 e-HDi version with the EGC transmission and micro-hybrid stop/start does 57.6mpg — officially; but as I commented earlier, on real roads my test car returned 46.2mpg.

Against? Falls short of the official fuel consumption figure, outdated and sluggish EGC automated transmission and, due to the larger wheels, firm and compromised ride comfort. On the plus side you get low motoring taxes, a fast-reacting stop/start system and a classy, well equipped crossover with lots of load space.

I have to conclude that these new micro-hybrid sales features look good on paper but in real life do not offer significant enough gains in fuel economy over the latest conventional diesel engines. Nonetheless, a saving is made because of the lower CO2 emissions which in turn determine road and company car taxes. Generally, though, the cars cost more to buy so it requires careful planning to find the model option to best suit your personal motoring budget. — David Miles