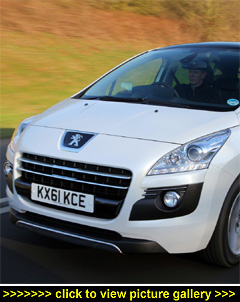 “Peugeot’s ‘world first’ diesel-
electric 3008 HYbrid4 Crossover
marks a new chapter in motoring
history — and you can buy one
today...”

ESCALATING FUEL PRICES and potential road tax hikes in the next budget all make Peugeot's 'world first' diesel hybrid — with its headline 70+mpg — something to cheer about.

While petrol engine-electric motor hybrids are not new, Peugeot's HYbrid4 is because it partners a diesel unit with an electric motor.

Reasons for moving away from petrol include a diesel engine's better fuel economy, lower CO2 emissions, less particulate emissions (due to their DPFS filter technology) and more torque, which allows a lower powered electric motor and smaller battery pack to be used with knock-on benefits for space and weight and, I suspect, price. Peace of mind comes from the Hybrid4's five-year/60,000-mile warranty.

With a projected take-up of 85% of 3008 HYbrid4 sales in the UK going to business users, the low 10% Benefit-in-Kind tax rate is very attractive, as too is the 100% Write Down Allowance for companies, and the zero cost First Year road tax.

Another major plus is the 74.4mpg official Combined Cycle fuel economy for the 99g model. For me, and for 65% of UK customers wanting a 3008 HYbrid4, this is the star of the line-up.

All 3008 HYbrid4 models use a 163bhp 2.0-litre HDI turbodiesel driving the front wheels. This is partnered with a 37bhp electric motor which drives the rear wheels as and when required. The latest generation Stop & Start system is a standard fitment on all versions, as too is Peugeot's six-speed electronically-controlled automated manual gearbox.

The cheaper (Ł26,995) 99g model comes with a relatively high level of kit but is fitted with 16-inch wheels and runs on low rolling resistance tyres — the good news is that not only does it cost less but, as a consequence of the smaller wheels, it's also far more comfortable.

Thanks to its CO2 emissions falling below 100g/km, 99g owners living or commuting into London are excused paying the Congestion Charge. As for economy, the 99g/km version officially returns 74.3mpg in the Combined Cycle. Road tax is free and company car users will only be hit for 10% BIK.

However, while it's all very well being a 'world first', does the HYbrid4 work satisfactorily and efficiently and, more importantly, does it make financial sense?

Actually, it does… on paper anyway. Performance from the torquey 221lb ft diesel unit is good anyway, but when used as part of a hybrid it is further improved by the 37bhp / 147lb ft electric motor.

Adding a four-wheel drive function and an electric power propulsion mode for future zero emission city areas all boost the reasons to buy, as do the compelling statistics for substantially reduced taxes.

However, these tax savings might lose their appeal with potential customers given the overall higher (Ł26,995-Ł29,950) purchase price of the 3008 HYbrid4 — it's up to nearly Ł5,000 more expensive than a 2WD 2.0-litre diesel model with the same EGC semi-auto 'box.

And the relatively short range of around three miles (at best) that the vehicle can travel using electric power only is not that impressive either.

Driven over a mixture of open roads, winding country lanes, stop/start city traffic and a little lightweight off-roading in the West Midland's Safari Park — where the Peugeot lion badge came face-to-face with the real thing — it returned an average of 44.4mpg.

This real-life mpg falls well below the official 70.6 — a figure a non-hybrid 3008 diesel model can easily match. For example, I'm currently driving a 3008 1.6 e-HDI diesel with the micro-hybrid Stop & Start system and it's regularly returning 46mpg — and it costs significantly less to buy.

Of course, it's to be expected that the Hybrid4's additional 200kg weight penalty (electric motor and battery pack) and the 4WD function are a big factor in these lower-than-expected economy figures. However, the customer can still win because the HYbrid4's low CO2 emissions earn it no-cost road tax and the lowest company car tax rate.

So, choosing a HYbrid4 over any other 3008 Crossover/SUV is going to be a financial balancing act although I suspect that being able to use a hybrid to show off the private or company owner's 'green' credentials will be a major purchasing reason, especially as it also offers 4WD.

Apart from the wheels and tyres, all 3008 HYbrid4s are technically identical. HYbrid4 models do feature some bespoke, albeit minimal, styling changes including a new two-bar grille and discreet HYbrid4 badging. The rear suspension is also a more compact and sophisticated independent multilink set-up, essential to make room for the electric motor, battery pack and electronic control unit.

In use, the diesel unit powers the front wheels only; the electric motor drives only the rear wheels. There's no mechanical connection between the two power systems whatsoever, just a high capacity electric cable connection.

All versions use Peugeot's six-speed EGC electronic automated manual gearbox, which has been criticised for its jerky shifts. That noted, with the additional torque from the engine/electric motor combination, it works marginally more smoothly in the HYbrid4.

The 104g model gains 17-inch wheels (although these tend to unsettle the car over poorer road surfaces), Peugeot's Connect Media Navigation system and a head-up display with distance alert, and an exterior lighting and visibility pack.

HYbrid4 models have a load capacity of 354 litres (1,435 with the rear seats folded). Non-hybrid 3008 models have more: 432 to 1,604 litres. The difference is down to the space under the load floor needed by HYbrid4 models for their electric power unit and batteries.

A centre console-mounted rotary dial allows drivers to select any one of four driving modes. Select ZEV (Zero Emission Vehicle) and the electric motor only powers the car, driving the rear wheels — providing there's enough power in the batteries; otherwise the diesel engine cuts in to top-up the batteries. In theory, ZEV mode would be ideal for zero emission towns/city zones but using the AirCon does severely limit the battery power-only driving range.

In 4WD both the diesel engine (driving the front wheels) and electric motor (driving the rear wheels) boost traction by working in tandem. Sport sharpens up the throttle response and quickens the gearshifts with the electric motors providing extra torque. Most likely, most of the time, the driver will select Auto and let the HYbrid4's electronic brain optimise performance and fuel economy. With the two power units working in harmony, driving is impressive — the turbodiesel engine is strong and the electric motor provides a linear surge in power and torque.
.
Against? Running on battery power alone, the 3008 has a very short driving range and if the 17-inch wheels are chosen, the ride can be jittery. Disappointingly, it also doesn't get close to the official mpg figures. Other niggles are the very low towing weight (500kg) and the expensive price premium over conventional diesel power.

Of one thing you can be sure — while the 3008 HYbrid4 is the world's first diesel-electric hybrid on the market; it will not be the last. Reasons to buy Peugeot's HYbrid4 include the 'world first' use of diesel-electric hybrid power, tax-friendly CO2 emissions (the First Year VED is zero and then just Ł20 per year thereafter) and a nice delivery of power. — David Miles