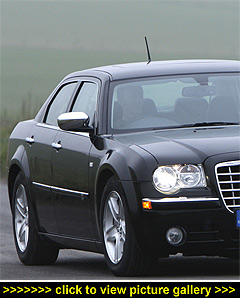 “Under new ownership but still with
us — the big, bold 2010 Chrysler
300C executive saloon remains a
quirky but realistic alternative to
premium brand executive saloons...”

RANGES HAVE BEEN REVISED AND MODELS DELETED as Fiat's ownership of the Chrysler Group of brands (Chrysler, Dodge and Jeep) gets under way. The 2010 Chrysler model range now consists of the bold and brash 300C Saloon and Touring and the large Grand Voyager MPV.

To coincide with the marriage of Fiat and Chrysler, I took a journey down memory lane and tried the 300C Saloon in its very latest 2010 guise. The 300C isn't a new product and much of its floorpan, drivetrain and other technical components come from Mercedes-Benz and, in particular, the past Mercedes E-Class executive range.

The current 2010 300C model range continues with both the Saloon and Touring versions powered by a 3.0-litre V6 diesel engine mated to an automatic gearbox. The high-performance 6.1-litre petrol-engined SRT-8, available on the Saloon, tops the range. The SRT-8 Touring sold out in 2009 and will not be replaced.

The Chrysler 300C Saloon has been, and still is, one of the most striking executive vehicles; well equipped but costing from less than Ł24,000. When first launched its bold and brash looks and imposing road presence attracted professional footballers, business execs and the business chauffeur operators. At that time it was an interesting alternative to similar models from premium German brands Audi, BMW and Mercedes. Today it is an idiosyncratic alternative that beats all of them for its attractive pricing. The 300C also makes a very good choice as a roomy, well equipped and durable used car.

The 300C SRT is priced at Ł27,995 and a real bargain in its executive sector. It offers, in addition to the SR model specification, a Bentley-style mesh grille with chrome surround, body-coloured door mirrors and door handles, wheel arch extensions, 20-inch aluminium wheels, leather-and-suede-trimmed sports seats and carbon-fibre interior detailing.

The top-of-the range performance model, the SRT-8, costs Ł41,795. Its legendary 6.1-litre, V8 HEMI petrol engine generates 425bhp with 420lb ft of torque. And the rear-wheel drive Chrysler 300C SRT-8 is capable of impressive performance times: 0 to 62mph in just 5.0 seconds with a top of speed of 165mph. No wonder it was the footballers' favourite.

While footballers and tax-penalised company execs have moved on to other offerings, with an entry-level price of under Ł24,000 the 300C should also attract customers from the Ford and Vauxhall brands (Mondeo and Insignia) who are looking for a comprehensively equipped car that stands out from the crowd. For such relatively little money it still offers a great deal.

It might not be the sharpest handling car on our roads but it is very comfortable and exceptionally roomy. And it' big on style and image — drive one and you will be noticed.

Fuel economy is good as well, with my automatic 3.0-litre diesel version returning a very decent 34.3mpg. However, with CO2 emissions of 215g/km the First Year road tax is Ł550 before dropping back to Ł245 annually. Benefit-in-Kind company car tax is relatively high at 35 per cent but the retained value for the diesel SRT version, my test car, is quoted by What Car? as 52% for 3-years/36,000 miles.

Going for it is the 300C's attractive pricing, high on-road presence, equipment levels, comfort and roominess and the fact that it offers a quirky but realistic alternative to premium brand executive saloons. Not so good is that it's big and bulky to park, the interior quality is 'old-school', it's not agile to drive and has a foot-operated parking brake.

Now Fiat owns Chrysler It is unlikely that the 300C will be replaced with a like-for-like but more modern version. Motoring times have changed but for now — for some bold people who need a bit of 'bling' in their life — the 300C Saloon should be looked on as a long-term investment to enjoy today and for it to be 'collectable' in the future. — David Miles