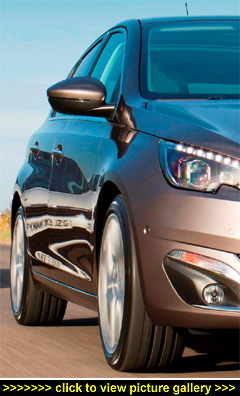 “Peugeot is promising that its all-
new 308 is a real game-changer —
and it might just be right. First off,
it looks much sharper. It may not
have the world’s most distinctive or
imaginative design, but the shape
and detailing have the sort of
understated class to give the VW
Golf a real run for its money...”

I PARTICULARLY LIKE THE SHAPE of the rear door glass, framed by some very upmarket-feeling brushed metal, and which cuts into the rear pillar giving you a great view out. High-spec versions also get full LED headlamps as standard — a world first — which look great.

The new 308 is also significantly lighter: fully 140kg less than the previous 308, thanks to lightweight body materials and an all-new EMP2 platform. It's aerodynamic, too, with an exceptionally good Cd figure of 0.28. Consequently fuel efficiency is greatly improved — indeed, Peugeot says the 308's fuel economy and CO2 figures are better than the equivalent VW Golf right across the engine range.

Despite being 3cm shorter and 4cm lower than the old 308, there's still plenty of room inside. Notably, there's extra space for the driver's feet in the footwell, and lots of room up front for the driver and passenger. The only area where there's some compromise is in the rear.

If you're of average height, space is fine; taller adults may find their heads brushing the roof and their feet struggling to fit in behind the front seats, while the rear seat squabs themselves are a bit flat. Boot space, however, is generous and, at 420 litres, claimed to be the best-in-class with 40 more litres than the Golf.

So does the new 308 live up to the hype in terms of how it drives? First impressions of the chassis are very good. Cornering is flat and assured, helped by a track that's some 20mm wider than before and a 20mm lower ride height. The suspension is quite firm, but this isn't at the expense of ride comfort.

Sure the road surface can be felt, but the damping is reasonably compliant. And the steering feel is also much better than most electric systems, with good weight and precision.

The 308 is a comfortable car to travel in, with supportive front seats (less so in the rear) and reasonable refinement (although tyre roar can become intrusive at motorway speeds). The turning circle is tight, too, making parking very easy — also helped by visibility that's better than average for the class.

The so-called i-Cockpit cabin is one of the best features of the new 308. Quality is on a completely different level to the previous 308, with a rich variety of materials that look and feel great. It's a very simple design — verging on minimalism, in fact. There's only one knob on the centre console (audio volume), plus a mere five buttons below it.

Just about everything else is controlled from an impressive and very large (9.7-inch) touchscreen in the centre of the dash. It's designed to look and operate like a tablet, with app-style buttons and hotlinks to navigate around, and it works superbly well.

In many ways the most interesting feature of the cabin is the high-mounted dial nacelle — the good news is that you don't have to take your eyes far off the road to clock the info they're conveying. The steering wheel is smaller than average to give you a better view, although some drivers will need to adjust it quite low to get a good view of the dials.

Oddly, the rev counter needle goes the wrong way around the gauge (anti-clockwise), which is a bit disconcerting at first; and I suspect this design was chosen because the top of the steering wheel can obscure the lower portion of the dials.

I drove three versions at the 308's launch: diesels in 92bhp and 115bhp guises; and the 156bhp petrol. Probably the best overall choice is the 92bhp diesel which has plenty enough oomph in the 308, although the torque spread in both diesels can be a little peaky.

The 1.6 petrol has easily the most satisfying performance, yet returns 48.7mpg (officially, at least). If you're in the market for a petrol-powered 308 you might want to wait until the spring of 2014 when a 1.2-litre eTHP three-cylinder unit will be available — this particular 308 promises a great all-round spec of generous power (up to 130bhp), low CO2 (104g/km), and frugal fuel consumption (up to 58.8mpg).

Only manual transmissions were fitted to the test cars made available to me, but on all versions I tried the choice of ratios was excellent. One striking feature is that gearchanges are effected via one of the largest levers I've ever come across, but the über-chunky feel in your hand belies the smooth and easy change quality.

Overall, the 308 is a thoroughly competent choice in the medium hatchback class. It has no obvious flaws and what it does well — cabin feel and generous equipment for the price — certainly does make it stand out. But does it stand out enough in what is the most toughly fought market arena of all? I'm not so sure about that, but there's plenty enough appeal in this Peugeot to win the new 308 many friends. — Chris Rees