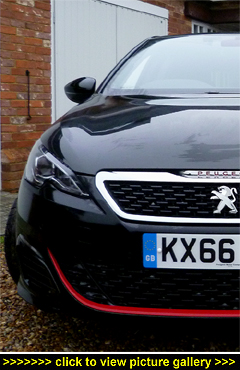 “When it comes to sporty Peugeots
the recently-retired 266bhp two-door,
two-seater RCZ R coupe will be much
missed. However, already there’s
a new lion-badged ‘hottie’ for keen
drivers — and it comes with not two,
but five doors...”

CALLED THE '308 GTi by Peugeot Sport' after the team responsible for its development (and who also engineered Peugeot's Le Mans 24 Hours- and Dakar Rally-winning entries), this latest hatchback GTi's powerplant, a 1.6-litre turboed petrol engine, is offered in two states of tune: 246bhp and 268bhp.

If 246bhp is enough for your right foot (and ego) then you'll only need to lay your hands on ú27,290 — but if you really can't resist those extra prancing horses then you'll need to dig a little deeper because ú28,890 is what it'll take to put one of the even more accelerative 268bhp versions on your driveway.

And if you really, really, really want your 308 GTi to stand out then another ú1,300 will make sure it will — because for that you can order a special finish called Coupe Franche that's exclusive to the full-on '270' version: its two-tone paintwork is split diagonally front/rear (rather than the traditional top/bottom along the waistline) with Pearlescent Nera Black colouring the tail section and Ultimate Red paintwork the forward two thirds of the bodywork.

Whatever paint job you decide is 'you', all GTi models sport a distinctive gloss-black grille with a horizontal chequered pattern flanked by full LED headlamps with integrated LED running lights above scrolling LED indicators, side skirts, signature Peugeot 'claw effect' LED rear lighting, a gloss-black diffuser book-ended either side by a large exhaust pipe, 'GTi' jewellery and dramatic alloy wheels.

Inside there awaits a classy sports-themed cabin, all sportily black with red stitching on the upholstery, dash, door panels, gear lever and tailored floor mats. Aluminium shows up in the pedals, footrest and shapely gear knob.

There's also body-hugging bucket seats (both with power lumbar and two-stage massage function) upholstered in leather effect material with suede-like Alcantara centre panels, Peugeot's i-Cockpit 'head-up' style dash with a large 9.7-inch multifunction colour touchscreen (with SatNav), an ³ber-tactile, flat-bottomed GTi steering wheel with a red centring mark at the top of its full grain leather rim, and a Start Engine push-button that along with the keyless entry system makes for quickfire departures.

Good personal space and comfort is guaranteed for the driver and front passenger with a fist of headroom, plenty of elbow room (and both a centre as well as usable outer armrests), and plenty of support from the height-adjustable sports-style seats, while big glass areas keep the well-fitted cabin light and airy in spite of the sport-themed black colour-ways.

A spot-on driving position with A1 visibility (including to the rear) is easily set, and the I-Cockpit set-up works a treat with the main dials and their chrome-and-red 'blade' pointers clearly seen over the rim of the compact steering wheel (rather than through it). Between the rev-counter and speedometer there's a driver's information panel showing key trip data as well as digital speed, etc.

The touchscreen controls just about everything, including the climate — now also accessed by fingertip — although there are still hard-buttons for speedy activation of the front and rear heated screens as well as the audio on/off. A thoughtful feature: switch off the ignition and the parking brake is applied automatically for you.

Along with the engine Start button there's another you'll want to press — it's marked Sport and pressing it switches the colour display from white to red, shows additional info on the central readout (power, turbo boost, lateral and longitudinal acceleration), increases responsiveness of the power steering, engine, and accelerator pedal, and amplifies the growl from the engine.

More good news — as the five-door 308 hatchback bodyshell also houses five seats and a practical boot, it means that when you're not hot-footing it around or even honing your driving skills at a trackday, the GTi can realistically stand-in as a fully functioning family car.

For those times when five, not two, is the rule, there's ample room in the back cabin for passengers; especially for two, who can amicably share the large padded central armrest with its built-in twin cupholders (so much better than the pop-up/pop-out kind).

The rear seats are comfy, backrest angles are restful, there's space between heads and the roof-lining and views out are kept interesting by the long windows — not everyone wants to play games while they're travelling!

Measuring a city-friendly 4.2 metres nose-to-tail the 308 GTi will happily swallow 470 litres of luggage if you load the boot to the lightweight parcel shelf-cum-luggage cover; load from boot floor to the roof and you can squeeze in 501 litres. Rear seats dropped down, the maxed out loadbay offers a very useful 1,309 litres.

Folding the back seats is easy and can be done either from the tailgate end of the boot or from within the cabin. A load-through luggage hatch adds extra versatility to that already provided by the 60:40-split backrests.

Is it fast? Absolutely — unless, that is, you don't think 155mph is fast enough to quality it as 'fast'. And 0-62mph in six seconds dead is not to be sniffed at. Actually, it feels faster but we'll stick with the paper figures. The other paper figures are for the economy — the official Combined Cycle figure is 47.1mpg.

Yeah, rightà for this level of performance, so what's that in real-life? Surprisingly, it's amazingly close: our week's hard driving saw an overall average of 42.4mpg. Impressive. More so when you take into account the driving satisfaction this GTi delivers.

The heart of the GTi is a four-cylinder 1.6-litre turbocharged petrol engine that punches out a not inconsiderable 268bhp backed up, more tellingly, by a muscular 243lb ft of torque that's on tap from 1,900 all the way to 5,000rpm.

Its 169hp-per-litre is the highest specific output in its segment, and makes it what we call a 'more' unit — because it's always ready and eager to give you more. Whatever speed you're travelling at, stamp the loud pedal and this responsive engine delivers an unwavering power ramp-up until it hits the rev-limiter.

Drop down through the close ratio six-speed 'box and the GTi will literally leap forward even when you thought you'd already wrung it out. Too many cars are described, with journalistic licence, as being 'point and squirt' machines; but this 268bhp GTi from Peugeot Sport most definitely is the real McCoy.

Even in the heaviest traffic the 268bhp unit remains even-tempered but it's always ready to up the pace; on most roads you needn't bother to change down; just plant your right foot and away you go. Thanks to the ever-ready torque on tap, safe, swift overtaking is a piece of cake — you'll be out and past and back in again without a blip in your heart rate.

And when calm is called for, cruising at the legal limit (still under half its top speed) feels almost effortless. Fortunately your road speed is shown digitally alongside roadside speed warning signs between the main dials.

The biggest surprise of the test? Not the effervescent poke but the ride quality. Despite the serious hike in power and the accompanying suspension tuning and lowered ride height, the GTi manages to serve up a compliant ride — despite rolling on 235/35 Michelin Super Sport rubber wrapped around 19-inch rims. Something that, whatever the route, makes long trips a pleasure.

Externally the GTi looks nicely 'planted'. However, it's on the move that you'll notice the benefits of the Torsen limited-slip differential prioritising torque to the wheel with the highest traction — because on a front-wheel drive car 243lb ft of torque is usually a recipe for unwelcome torque-steer fighting the steering. No such problem with the GTi 270. Arrow-straight getaways can be made with confidence, and bends speared through with brio for clean, fast and smile-inducing exits.

Helping the dynamics and performance meld enthusiastically together is the petrol engine's clean power delivery and unswerving pick-up throughout the rev-band, plus the small-diameter steering wheel and the speedy responses it provides. Scrubbing speed is equally straightforward thanks to powerful brakes: substantial vented 380mm discs (with red-painted 'Peugeot Sport'-branded four-piston callipers) at the front and 268mm counterparts at the rear.

A quick, keen-handling, comfortable-riding, five-seating hatchback with an authentic GTi character, the 308 GTi 270 is two skilfully intertwined cars in one: rapid hot-hatch; and urbane, easy-to-live-with family hatchback. And you won't find many of those around. ~ MotorBar