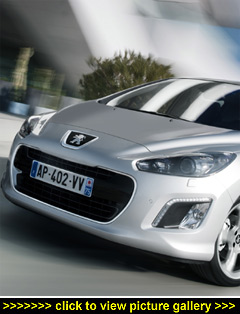 “Peugeot’s family-sized 308 range
of hatchbacks, SW estates and CC
coupe-convertibles step out for
the Summer, all freshly made over
with  new faces, a nip here and a
tuck there — and a lot more changes
under the skin...”

THE REALLY GOOD NEWS is that it won't cost any more to put one of these superior new models on your drive because they cost less — on average about È800 less — than the models they replace; yet despite the lower price, the technology and specification is higher.

The revised 308s also benefit from a new range of trims and specification levels: Access, Active, Allure, GT, Oxygo and SR. And, depending on the body style, the engine line-up consists of four petrol engines (98bhp to 200bhp) along with four HDi diesel engines (92bhp to 163bhp).

All engines are set up to maximise environmental efficiency. For instance, the entry model diesel, the hatchback 1.6-litre HDi FAP 92bhp with a manual 'box, has CO2 emissions of a lowly 110g/km with sub-100g/km for the clever auto.

A significant technical change — and following in the footsteps of the all-new Peugeot 508 — is that the new 308s are also available with Peugeot's innovative e-HDi micro-hybrid Stop & Start technology, as fitted as standard to the 1.6-litre HDi FAP 112bhp Euro 5 diesel. This can be had with Peugeot's electronically-controlled EGC six-speed manual 'box or with a traditional six-speed manual gearchange.

The e-HDi Stop & Start provides 40 per cent faster restarting than a conventional stop and start system and is twice as fast as a manual key restart. It also has silent operation and no vibrations on start-up, making it very easy to live with — of course, if preferred, the Stop & Start function can easily be switched off by the driver.

In addition to the e-HDi micro-hybrid system, all other factors affecting tailpipe emissions have been optimised: weight is reduced by an average of 25kg per car; low rolling resistance tyres are fitted; and there are high-efficiency Euro 5 compliant engines. Furthermore, airflow styling tweaks have created a low drag coefficient of 0.28 for fuel economy versions.

More financial good news: all these improvements have resulted in the new 308 models' residual values being over 14 per cent better than those of the outgoing 308s.

Another plus is that the latest 308s are available on Peugeot's Just Add Fuel leasing scheme for less than their predecessors; for example, the 308 Active VTi 120 is available to private users for È235 a month (with an affordable È1,500 deposit) including insurance, servicing and maintenance.

It's all good news, this new 308 — not only will the added value and lower purchase prices catch the eye of savvy buyers, but so will the revised styling. Gone, thankfully, is the long, droopy front nose, huge grille and the heavy 'double chin' of a front bumper — with new headlamps and LED running lights, the 308's fresh front-end looks far more refined and tasteful.

Minor updates to the interior styling and fixtures and fittings have also been made, all generally well done although there are some cheap-feeling plastics in the lower priced, best-selling Access and Active versions.

I tried out the new e-HDi system in the 1.6 112bhp HDi hatchback (with the manual gearbox) around Cardiff's busy city centre at rush hour — a route cluttered with traffic lights.

The six-mile route took 20 minutes during which time, according to the on-board timer, the engine shut down in fuel saving mode for 6.38 seconds and the car returned 44mpg — 10mpg shy of the official Urban Cycle figure.

As the e-HDi system comes as standard and with no extra cost to the owner, I guess it is useful although on this showing I do not see it offering huge fuel savings. The CO2 rating for this particular model is 118g/km which results in a È0 cost for First Year road tax and then just È30 per for the second year onwards. Company car drivers will pay 13 per cent Benefit-in-Kind.

I also had a chance to try the 308 SW estate with this same engine on the motorway, country roads and in more stop 'n' go town traffic. Overall the fuel consumption was 55.3mpg against the official Combined Cycle 62.7mpg. So it does underachieve on what are the official figures but that is mostly the case industry-wide.

In the real world, the fuel economy is still pretty good and the latest changes to further clean-up the engine have had no detrimental effect on performance. Also, the 112bhp engine is quieter than the outgoing 110bhp unit, and is more responsive too, thanks to its sturdy 199lb ft of torque at 1,750rpm.

I preferred the ride comfort and handling abilities of the SW estate over the five-door hatch; it felt a better balanced car with a more compliant suspension, and the added interior load space is welcome.

Against: Not the sharpest handling car in this sector, real-world fuel consumption is good but didn't get close to the official figures despite the new micro-hybrid technology.

All three models in the face-lifted 308 range — the hatch, SW estates and the coupe-convertibles — are significantly improved, especially style-wise, and the fact that they cost on average È800 less than the models they replace is all good news. — David Miles