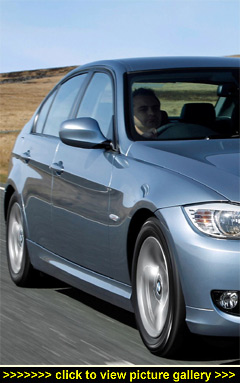 THE 3 SERIES is BMW UK's largest-selling range of cars to retail, fleets and business user-chooser customers. Although older and slightly smaller than the Audi A4/A5 and Mercedes-Benz C-Class, the 3 Series still outsells its German rivals in the UK's premium brand sector.

Recent mid-life updates to the Saloon include a new front end (bonnet, grille and LED lighting) and new rear bumper and lights along with revised petrol and diesel engines that now offer better fuel consumption, more power, more torque and lower CO2 emissions. All models have increased specification including leather upholstery. Prices rise by 2.6 to 3.7 per cent but are offset by the added performance, equipment and predicted better residual values.

But arguably more important than these improvements is the addition to the 3 Series range of the 320d EfficientDynamics Saloon, not least because more than half of the annual 40,000 3 Series UK sales are for Saloon variants. This new 2.0-litre, four-cylinder turbodiesel engine with 163bhp and 280lb ft of torque is the cleanest 3 Series ever — CO2 emissions are just 109g/km. And this unit returns an official Combined Cycle figure of 68.9mpg.

This in turn means owners don't pay a penny of road tax in the first year and then only Ł20 a year from the second year of registration onwards. Other real-life benefits for company car drivers is a low 13 per cent Benefit-in-Kind tax cost which will save 40 per cent tax payers Ł500 a year. Because of its low CO2 rating, the new model has a 100 per cent first year write-down allowance for companies and a predicted 5 per cent reduction in lease costs.

Further good news is that the new model — priced at Ł27,245 — is the same price and has the same specification as the 320d SE Saloon. The conventional 320d's 184bhp/280lb ft diesel engine (same torque but 21bhp more over the new EfficientDynamics variant) also has a higher CO2 rating of 125g/km. So while road tax is still nil in its first year, after that it's Ł90 per annum plus a higher BIK of 18 per cent.

Better still, there's no loss of performance with the new low-CO2 engine: 0-62mph takes just 8 seconds and the top speed is 142mph. Both figures are only a whisker behind the conventional 320d model. And my test car's real-life 'first drive' fuel economy was 54.3mpg for everyday A-road driving.

So choosing the newcomer to the 3 Series range is a win-win proposition for retail, business and company car users. No wonder that sixty per cent of BMW's worldwide production of this tax-busting model is heading straight for the highly-taxed UK market.

The 3 Series, in whatever body style, offers the most accomplished drive in its premium sector. The balance of the car is superb; the road holding immense and for family users with grown-up children, only its relatively-compact interior against the newer and larger Audi A4/Mercedes-Benz C-Class models is an issue. We will have to wait a year or so for the next generation of 3 Series models but until then the fine range of engines, EfficientDynamics fuel-saving technologies and energy capture measures, plus the new low-CO2 2.0-litre unit makes this still a very competitive ownership proposition.

If you are somewhat confused by BMW calling this new addition the 320d EfficientDynamics Saloon, you are not alone. Every single BMW model in the current line-up now features EfficientDynamics technology, and as there are other 320d versions in the range it's not surprising that there's some confusion with this new version's name.

However, confusion aside, I am impressed that BMW has introduced this tax-friendly version without resorting to the usual industry practise of charging more for eco versions because a higher price only pushes up the BIK tax for company car users so it's actually self defeating — well done BMW!

For the record this model is well equipped: standard equipment includes 16-inch alloy wheels with Energy Saver tyres (so the ride is not as firm or unsettled as with run-flats), stability control, cornering brake and traction controls, rear parking sensors, six airbags, air conditioning, electrically-operated windows and door mirrors, multi-function leather steering wheel, on-board computer and a good sound system. There is much more included and it remains a fine package.

Against? The EfficientDynamics labelling when all BMW models now have EfficientDynamics technologies, and the fact that it's smaller for interior space than its compact premium competitors from Audi (A4) and Mercedes (C-Class). On the plus side are tax savings, it's lean 'n' green character, no compromise in engine performance and no price hike over the standard 320d SE version. — David Miles