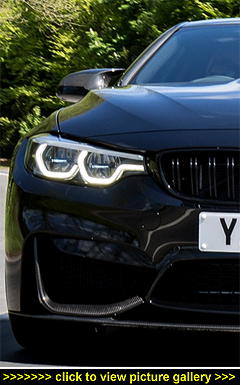 “Launched in 2013, BMW’s 4 Series
range has been a big hit with 400,000
of them already on the roads.
Nevertheless, BMW has decided to
make them even better and the
4 Series models have just been
‘refreshed’ in the equipment, styling,
and chassis departments...”

THE 4 SERIES 'STORY' STARTED with the launch of the Coupe (which replaced the famous 3 Series Coupe) and since then the line-up has been extended with Gran Coupe and Convertible versions.

The UK is the second largest market (after the States) for the 4 Series — around 23,000 will be sold in its first full year of sales in Great Britain: the four-door Gran Coupe is expected to account for ten thousand of those followed by 9,000 two-door Coupes plus 4,000 of the two-door Convertibles.

Interestingly, the introduction of the 4 Series has had little or no affect on UK sales of 3 Series models, 40,000 of which found homes in the UK last year.

Putting one of the revised 4 Series models on your drive will cost you from Ł32,580 (for the Coupe or Gran Coupe); they top out at Ł46K. Convertibles cost from Ł37,630 and go up to Ł50K while the high performance M4 Coupe is priced at Ł58K and the M4 Convertible is Ł62K.

Depending on the engine and model chosen, transmissions can be either six-speed manual or eight-speed Steptronic.

When it comes to equipment levels, in addition to the specific M variants, there are Sport and M Sport (chosen by three out of every four UK customers) for the Coupe and Convertible while the Gran Coupe has an additional starter level of SE.

Inside, leather upholstery is now standard across the range; there's new detailed interior trim including carbon-fibre inserts; all models have the sixth-generation professional navigation system, real-time traffic information (including a function for inter-car connection with other new BMW warnings of traffic or road conditions ahead); and there is a new voice control information command system.

All versions retain the Eco-Pro driving mode function with Eco, Comfort, Sport and Sport+ settings. M4 versions also have minor styling changes outside and in, plus the option of an Exterior Carbon Pack.

Most significantly, all 4 Series models have revised suspension settings to improve handling — without compromising the ride comfort. There are also new shock absorbers, anti-roll bars and the power steering has been recalibrated.

The detailed styling changes — inside and out — are not obvious from a casual glance but clearly noticeable, after just a mile or so of driving on twisty country lanes, was the improved handling and ride compliancy. Although the M4 Coupe/Gran Coupe was good before, the recent changes to the suspension and steering mark a significant step forward — while it is hard to put a value on such an improvement, it's undoubtedly the most striking change for the 2017-model-year cars.

The handling is taut, the steering needle-sharp and the ride comfort excellent — and that cannot always be said about the sportier BMW models.

The latest 420d Coupe feels so well balanced and is a car you will really enjoy driving for long distances, whether on winding country roads or during more mundane motorway journeys. Generally it takes a while before suspension and steering changes become noticeable to the average driver; not with this revised 4 Series range — the driving improvements are felt immediately.

As for other changes in spec and trim, it's improvements all round; some more significant than others but the SatNav, iDrive infotainment and communication functions have all evolved alongside those of most other premium brand cars.

The 2.0-litre 420d 190hp (187bhp) four-cylinder turbodiesel engine is both well known and well liked — and used extensively throughout the BMW range. With 295lb ft of torque on call from 1,750rpm response is strong and midrange flexibility, even in Eco mode, is refined — and all done with little engine noise and no stress. My test car had the six-speed manual gearbox which added to the 'sports' driving appeal of this 149mph rear-wheel drive model that does zero to 62mph in 7.3 seconds.

Officially the Combined Cycle economy is given as 62.8mpg and on my brief but swift test drive the 420d returned 50.4mpg. With CO2 emissions of 119g/km, this M Sport spec's road tax costs Ł160 for the First Year and Ł140 thereafter.

We naturally expect new or upgraded models to be better than their predecessors; it's all about evolution. The refreshed-for-2017 4 Series models deliver on that but thanks to significantly enhanced handling and compliant ride comfort, they're also very rewarding to drive. ~ David Miles