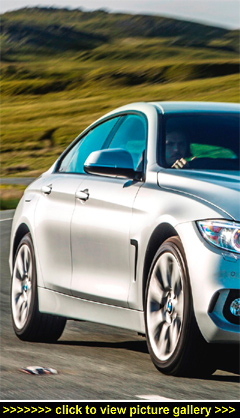 “BMW has just introduced the 4
Series Gran Coupe — a four-door
version of the two-door 4 Series
Coupe launched in October 2013.
The four-door Gran Coupe, with
a tailgate to facilitate optimum
luggage carrying, is the third and
final model to be added to the 4
Series range and will compete
against the Audi A5 Sportback,
the Mercedes CLA and, perhaps,
the VW Passat CC...”

THE GRAN COUPE will make up a quarter of all 4 Series sales and although 60% of UK sales will go to the corporate sector, BMW is also expecting the Gran Coupe to appeal to families who want similar practicality to that offered by the 3 Series Saloon but with a higher level of standard equipment in a more stylish package.

Initially the Gran Coupe is launched with the choice of three petrol and three diesel engines, with four more to be added. The range will also include xDrive versions which will account for 20% of UK sales. This Ł1,500 option is a permanent 'intelligent' all-wheel drive system which in normal use provides 60% of its driving torque to the rear wheels and 40% to the front, with drive shuffled automatically to the wheels with the most grip.

All models are available with a six-speed manual gearbox or an eight-speed auto. Specification levels are SE, Sport, Luxury and M Sport. Prices currently start at Ł29,425 for the 420i SE and rise to Ł44,545 for the 435d xDrive M Sport but, as usual, there is a wide range of extra-cost items which add considerably to those prices.

From the nose to the A-pillars the Gran Coupe is virtually identical to the 4 Series Coupe, but from there back the bodyshell is different: four doors instead of two; a B-pillar that's been moved forwards to accommodate the rear doors; frameless windows; the roofline is extended and raised at the rear (increases rear passenger headroom by 27mm); the boot is larger by 35 litres (480 extending to 1,300 litres); there is an electrically-operated tailgate; and whereas the Coupe has four seats, the Gran Coupe has five.

It's not all good news — although the legroom is sufficient for adult passengers, the headroom is limited for six-footers and squeezing four doors into the same overall length of the two-door coupe means the doors themselves are quite narrow and some will find getting in and out of this Gran Coupe quite restrictive. Also, where the B-pillar has been pushed forwards to accommodate the rear doors, it's cut into the driver's side vision at road junctions.

As it is with all 3 and 4 Series derivatives, the most popular engine in the range (and taking 35% of sales) will be the 420d. I tested this engine with the xDrive system and best-selling M Sport trim — with a manual gearbox it costs Ł36,425, but ticking boxes in the options list could see a customer spending close to Ł44,000 for this particular model.

Not taking up the xDrive system would save Ł1,500 — however, given the state of our roads, ever-worsening winter weather and the added handling performance it provides all year around in both wet and dry conditions, it's worth it.

As too is the additional Ł1,690 sport automatic transmission fitted to my test car which serves up seamless and well-spaced changes that optimise the refined performance — it's zero to 62mph acceleration is also a little faster than the six-speed manual.

The 182bhp produced by this 2.0-litre twin-turboed direct injection diesel unit is well known, and its performance versus fuel economy readily appreciated. With 280lb ft of torque developed from 1,750rpm, it's responsive and gives reasonably rapid performance even on twisty roads.

The quick-shifting 'intelligent' sports transmission and xDrive traction combo is impressive. The beauty of this bi-turbo diesel drivetrain is that the Gran Coupe can be a long-legged family cruiser but, when needed, the driver can indulge in a bit more spirited driving without penalising the fuel economy. Fortunately the suspension settings for the Gran Coupe have been tuned using UK road conditions.

Top speed is 142mph with zero to 62mph taking a brisk 7.5 seconds. The official Combined Cycle fuel consumption (with the optional larger 19-inch alloy wheels) is 56.5mpg = I averaged 45.4mpg. The CO2 emissions are 131g/km and company car drivers (likely to account for the biggest slice of the sales cake) will pay 22% company car tax.

A classy and versatile addition to the growing BMW range, the 4 Series Gran Coupe looks good, drives well, and has a roomy boot. Overall it's far more practical than the two-door version — having four doors, even narrow ones, does allow easy access to the rear three seats without the driver and front seat passenger having to climb out of the car every time the back seats are needed. A far more dignified and practical approach to modern executive Coupe ownership. — David Miles