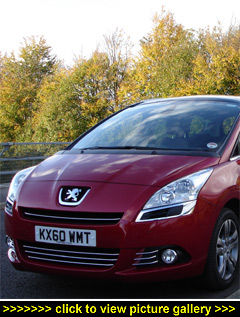 “Peugeot bills its 5008 compact
MPV as ‘Enjoyed by families. Loved
by drivers’. That’s a pretty broad
mission statement which, like
handling and ride, usually demands
compromises. So, does the 5008
really manage to please both the
driver and the family?”

BOTH WILL LIKE THE LOOKS. In a nutshell, it's light years away from most people's idea of an MPV which, restricted by their one-box bodystyling, are usually very much biased towards function with appearance lagging a long way behind. Not so the 5008 — it's as pretty as it is practical.

Size-wise, it's a family-friendly 4.5 metres long, 1.8m wide (2.1m mirror-to-mirror) and 1.6m high with seven seats — which should be more than enough to go round, unless you happen to be like Steve Martin in Cheaper by the Dozen and head-up a tribe of twelve.

Running a family is an expensive business and family transport usually has to be fitted to a budget. Fortunately, the 5008 range is priced to suit most pockets — starting from Ł17,495 and topping out at Ł24,395. Further budgetary fine-tuning is helped by there being three trim specifications to choose from: Active, Sport and Exclusive.

Good news for the family's designated filler-upper is that 5008 models equipped with Peugeot's EGC electronically-operated semi-automatic six-speed gearbox won't be spending a fortune at the pumps. Furthermore, there's no fuel penalty over the six-speed manual model: the EGC's official combined cycle consumption figure is 55.3mpg — the manual's 2mpg less, at 53.3.

Both will do their bit to make the family fuel budget go as far as possible. Confirming this, a week's real-world driving in our EGC auto saw an average of 45.1mpg and, as you know, we don't drive to save fuel. When it comes to performance, the EGC scoots from standstill to the benchmark 62mph in 12.6 seconds before topping out at 112mph.

For you money you certainly get a long list of kit fitted as standard. Range-topping Elegance models come with a bunch of safety items to keep you and your family safe starting with a five-star EuroNCAP safety rating, Speed & Distance Alert, ESP electronic stability programme, ABS etc, tyre pressure monitor and six airbags: two front, two front-side and head/curtain airbags covering all three rows of seats.

Apart from the hi-fi, family members will be most interested in who sits where. There's a lot of choice, and clearly a lot of thought has gone into maximising the usability of the cabin space.

The middle and third rows of seats can be folded down one-handed (ideal for busy Mrs Mummy) and easily returned to their original positions. The second row features three individual seats of equal width that can be folded, reclined and slid backwards or forwards 130mm so each family member can set their own personal legroom.

Access to the third row is via the second row's outer seats: just pull the release on a middle-row window seat and, in one easy movement, the seat cushion lifts and the seat back moves forward, opening up the maximum space for those wishing to get into the car.

When not in use the rearmost pair can be 'disappeared' in a flash — one pull on a cord in the boot and they fold into the floor, leaving a totally flat load bay. Another well-considered feature: with all seven seats occupied the space where the third row seats lay when not in use can be used for additional out-of-sight storage.

Those occupying the middle row will no doubt find a use for the sturdy pop-up picnic tables attached to the front seatbacks. And to make them feel as important as their big brother of sister in the front passenger seat, they too can select the fan speed for their own dedicated air vents.

Aisle three's pair of individual seats are full size chairs but legroom is better suited for younger family members — grown-ups will be okay back there, but on shorter journeys. However, they too get their own cupholders, door pockets and armrests.

Middle row passengers can pass the time watching DVDs or playing games on the 7-inch colour screens (integrated into the backs of the front headrests) which form part of the optional multimedia system. Specify this and you also get a connection console to connect different types of mobile audio/video equipment (video or games consoles, DVD player, etc) and two Bluetooth wireless headsets. Minimising teen angst is the ability to connect two video sources simultaneously, making each screen independent in terms of the image being shown, so individual family members can choose to watch the same programme on both screens or each engage in different activities.

The easy to operate, pull-up mesh blinds on the second and third row windows keep out the sun, provide privacy for snoozing or better contrast for gaming and watching DVDs.

I don't know of anybody who's ever been upgraded on a flight but in a 5008 the driver will definitely feel 'upgraded'. The smart fascia curves round and down to the left of the driver, merging into the centre-stack and the raised housing for the selector lever.

The large windscreen, low window lines and raised driving position provide first class visibility and the driver is further pampered with lumbar support, seat height adjustment, an adjustable height seat belt and a pleasant-to-hold, sporty, flat-bottomed leather wheel. As far as gear shifting goes, you can be conventional and use the lever or avant garde and use the paddles.

At first glance the futuristic selector lever looks like something Captain Kirk would feel at home with because it's like a selector lever but not as you know it! Actually, it's all pretty straightforward and you get used to it in no time — the main difference to a regular auto 'box is that with the EGC there's no Park position; just Neutral, Drive (Auto) and Reverse. As there's no Park, the moment you turn off the ignition the EGC automatically reverts to Neutral and applies the parking brake for you. Flick the selector sideways and you can make manual sequential shifts. There's also a Sport setting and it works just fine in both manual and automatic modes.

If you prefer to be in control, then the paddle-shifters are an easy way to go; most drivers will, I suspect, be more than happy to let the 'box take the strain and leave the lever in 'Auto' to do their changing for them. Whichever way you like best, it will be stress-free and have the bonus of absolutely no mpg penalty for going down the 'two-pedal' route.

The 1.6-litre, four-cylinder, common-rail turbodiesel engine generates 112bhp and with 177lb ft of torque available from 1,750rpm (191lb ft in overboost during hard acceleration) it's a strong and flexible performer. And like a good butler, it performs its duties without disturbing its master. Cruising motorways, it's not only refined but spirited enough to keep up there with the other guys. You do, however, need to watch your speed as it seems happiest loping along — where legal — at an unruffled 90mph.

Helping you keep on the right side of the law is Peugeot's brilliant Head-Up Display inspired by fighter aircraft technology. This projects your current road speed onto a small translucent screen which extends from the top of the instrument panel so it's always in your eye-line and information (speed, cruise control/speed limiter and distance alert) can be viewed without having to take your eyes off the road.

The rich yellow figures are crystal clear even in bright sunshine. The biggest shock you'll get once you start using the Head-Up Display is seeing your real speed as opposed to how fast you think you're going. It's an indispensable safety aid and should be standard in every car on the road.

Drivers can also activate the radar-based Distance Alert — this projects a 'reaction time' figure on to the head-up display which represents the time in seconds between you and the vehicle ahead. By means of a toggle switches located on the fascia panel, the reaction time can be set to between 0.9 and 2.5 seconds — an audible alarm sounds if your 5008 gets too close to the car in front.

The cabin is very swish with elegant chrome and aluminium highlights and first rate fit and finish throughout, quality cloth upholstery (leather is an option) with flip-up inner armrests on both front seats. The nicely bolstered front seats are also a great place to travel and proved supportive and relaxing on both short and long journeys.

Some of the 5008's many 'convenience' touches include an electronic parking brake (operated by a small lever behind the gear selector and which automatically applies/releases the brakes as you stop/move off), one-shot up/down on all four windows, one-shot operation for the huge glass roof's sunblind, child locks for the rear doors (operated from the driver's door) and automatic drive-off central locking.

There's also an abundance of oddments space for a family's 'stuff' including very big door pockets, chilled 10.5-litre centre console bin and the easily overlooked (if you don't read the manual you'd never know they're there) lidded bins built into the middle row floor along with more storage under the front seats. Spend just a few hours in the company of a 5008 and you'll understand why so many families are smitten with them.

The final hurdle for pleasing both the driver and the family is the ride and handling. Passengers want a smooth ride but a soft-riding vehicle often spells 'compromised' handling dynamics. As far as the ride goes, the 5008 serves up a well-judged and pleasant ride, smoothing out lumpy blacktop while remaining stately and predictable. So, enjoyed by families.

Thankfully that's not bad news for the driver because you can press on in a 5008: it drives well with good body composure and minimal body lean that, paired with accurate steering, means corners can be taken neatly and briskly without disconcerting the family and in a far more accomplished manner than you would expect of a spacious people carrier. So, liked by drivers too.

Finally, true to its compact MPV billing, the 5008 is equally accommodating when it comes to that prerequisite for all families — luggage. With five seats occupied, there's a practical 512 litres of stowage space; fold rows two and three and you can carry up to 2,104 litres of cargo. And for long items, the front passenger seat folds flat into a 'shelf' configuration for transporting long objects of up to 2.76m. In many cars, taking out the luggage blind when the seats are folded leaves you with the problem of where to store it. Not so in the 5008 — there's a space designed just for it behind the middle row seats.

All-in-all the versatile, sleek-looking and family-friendly 5008 does exactly what Peugeot says it will do: pleases both the family and the driver. — MotorBar