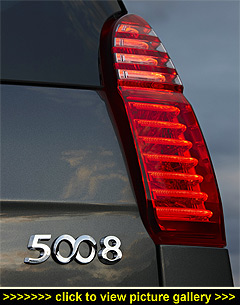 “Even before it had gone on
sale, the new Peugeot 5008
was named ‘MPV of the Year’
by What Car? magazine.
Not surprising as it’s clearly
smarter than the average MPV...”

FOLLOWING ON THE HEELS of the successful introduction (in November '09) of the Peugeot 3008, a five-seater hatchback-cum-MPV with the command driving position of a 4x4 that's just been voted 'Car of the Year' by the influential What Car? magazine, is another new model from Peugeot — the 5008 compact, seven-seat MPV (multipurpose/people carrier). And even before it went on sale, What Car? named the 5008 as its 'MPV of the Year'.

With demand outstripping supply for the new 3008 — around 10,000 units are expected to come to the UK in 2010 — Peugeot has a more modest target for the mid-sized, seven-seat 5008. Around 5,000 of these should find UK homes this year, with 55% of those going to retail and business user-chooser customers.

There are two petrol and three diesel engine options with petrol models likely to be the choice of 53% of UK customers. There is also the choice, depending on the engine chosen, of Active, Sport and Exclusive trim and equipment levels. Sport, in the long term, is likely to be the most popular but like the 3008 the top Exclusive package is the one most in demand by early customers.

Prices range from Ł17,345 up to Ł24,145. The core model is likely to be the 1.6 HDi 110 diesel in Sport specification as tested here. This model costs Ł20,045 with a manual gearbox and Ł20,545 with the EGC automated transmission. All 5008 versions have an ESP electronic stability programme as standard and all have a five-star EuroNCAP safety rating.

Selling against established and generally heavily-discounted mid-sized MPVs such as the Vauxhall Zafira, Citroen C4 Picasso (which shares the same underpinnings as the Peugeot 5008), Renault Grand Scenic and the Volkswagen Touran, Peugeot has relatively modest sales targets for their very smart newcomer.

Overall sales in the MPV sector of the UK's new car market fell by over 30% last year and the big losers were the larger-sized MPVs such as the Ford Galaxy/S-Max, Renault Espace, Mitsubishi Grandis, Peugeot 809/Citroen C8 and the Chrysler Voyager. Other than the taxi, minicab or hotel minibus market, the appeal of owning and driving a conventional mid to large MPV is no longer as strong as the design usually shouts 'family-user'. Not only that, they cost significantly more to buy and run than a modern hatchback at a time when motorists are being forced to downsize and down-price due to escalating costs.

But Peugeot, and its sister company Citroen, still have faith in the MPV. They have come up with elegant new styling, classy and clever interiors and fuel-efficient engines for their new generation of these vehicles.

The new 'brand' styling from Peugeot means their gaping mouth grille has gone as too has the protruding nose treatment for the bonnet. Like the smaller five-seat 3008, the seven-seat 5008 really looks very smart and not at all like other slab-sided, van-based MPVs.

Being 4,530mm in length, 2,118mm wide and 1,638mm high, the newcomer is easy to drive and park although the width can be an issue when opening the hinged doors in skimpy parking slots. Access is good front and rear and the second and third rows of seats fold down one-handed and can be returned to their useable positions very easily.

The rear row of two seats will not be as comfortable for long journeys or the long-legged but for occasional users they will be fine. The great thing is that the seats fold into the floor to give a totally flat load bed. With all the seats in position the boot space is 578 litres; with the middle and rear rows folded, there's 1,754 litres.

The rest of the interior, like the 3008, is a huge improvement over other current Peugeot models. The quality is higher, the look is better, and the ease of use is generally improved. These elements make the new 5008 a very nice place to be.

The Peugeot 5008 feels to have a stiffer suspension layout than its sister Citroen C4 Picasso, so the body roll is less but on some road surfaces the ride is fidgety and unsettled. Having a stiffer suspension means the 5008 should be popular with drivers who appreciate sharper handling; those who want comfort and travel at a lesser pace may prefer the Citroen version.

The engine line-up offers two 1.6-litre petrol units (120 and 156bhp), a turbodiesel 1.6-litre 110bhp engine and two 2.0-litre turbodiesel versions with outputs of 150 and 163bhp. My personal choice, as a retail buyer covering less than 12,000 miles a year, would be the 156bhp petrol turbocharged high pressure THP unit — one of the best small engines in the world. It produces maximum torque of 177lb ft from just 1,400rpm so it is fantastically flexible and responsive, and the fuel economy at 39.8mpg is pretty acceptable.

It is also the quickest engine in the whole line-up with a top speed of 121mph and a 0-62mph time of 9.7 seconds. For good measure, the 5008 in Sport specification with this engine costs Ł19,345 — Ł700 cheaper than the model with the expected most popular engine, the 1.6 110bhp HDi turbodiesel unit reviewed here. However, this well-known 1.6-litre diesel will return 53.3mpg in the combined cycle (and CO2 emission of 140g/km with the manual six-speed gearbox) and it is cheaper to tax as well. As usual, it's all a matter of personal choice because either of these two engines will do a great job.

As already mentioned, on some road surfaces the ride can be fidgety but apart from that there are lots of good reasons to buy a 5008: it's more stylish than a conventional MPV, it's compact and practical, comes with a high level of safety and a five-star safety rating and is well equipped and has a good quality interior. — David Miles