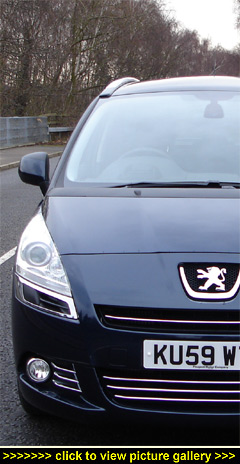 THE MOST POPULAR VERSIONS are the 1.6 HDi 110bhp diesels — tested here in Ł22,595 top-spec Elegance trim and fitted with Peugeot's EGC (Electronic Gearbox Control) automatic transmission which, when it comes to economy, is neck-and-neck with the same model fitted with a six-speed manual 'box. Officially, the auto's combined fuel consumption figure is 55.4mpg; the manual manages 53.3mpg. In performance terms there's not much between them either: the auto is faster to 62mph (12.6 seconds) but, at 112mph, slightly down on top speed; the manual takes 12.9 seconds to get to 62mph but runs to 118mph. Swings and roundabouts.

Traditionally, MPVs are heavy on the 'function' and light on the 'looks'. The 5008's designers have balanced the equation and Peugeot's MPV is as smart as it is sensible. Fronting its elegant new styling is a smooth new nose, along with shapely flanks that make the 5008 a very smart looking vehicle in spite of family-friendly dimensions of 4.5 metres long, 2.1m (mirror-to-mirror) wide and 1.6m high.

Entry and exit to the classy, well-packaged and airy cabin, both front and rear, is easy. Once inside, the new style continues. For the driver, the large front windscreen, low window lines and raised driving position provide excellent visibility. The dash holds an attractive set of instruments and sweeps round and down to the left of the driver, merging seamlessly into the centre-stack and the raised gear-lever/selector housing.

Tasteful chrome and aluminium highlights add to the upmarket feel. Controls are ergonomically positioned and there's a Head-Up Display providing key driving information: road speed, distance alert time, speed limiter or cruise control status. The rich yellow figures — large, sharp and easy to read day and night and even in the brightest sunshine — are projected onto a small clear screen above the instrument panel. From the driving seat it appears as if the data is actually on the lower windscreen and because it keeps the information within the driver's field of vision it means eyes can be kept on the road.

It's a brilliant system and contributes to real peace of mind when you're driving. There's generous headroom between front seat occupants and the massive panoramic glass roof and the accommodating front seats, upholstered in a smart two-tone cloth, are made more comfortable by drop-down inner arm rests (along with useably-wide outer armrests on the doors) and add to the well-packaged ambience — the 5008's cabin really is a pleasant place to spend time.

Numerous nice touches include the electronic parking brake (operated by a small lever behind the gear selector and which automatically turns on and off as you stop and move off), one-shot up/down on all four windows, one-shot opening/closing for the huge glass roof's powered sunblind, child locks for the rear doors than can be operated from the driver's door panel, automatic drive-away central locking, rear parking sensors and Distance Alert — a radar system that constantly monitors the distance between you and the vehicle in front. Stray too close and an audible alarm warns you.

The 'reaction time' figure shown in the head-up display is in seconds and represents the time it would take to safely respond if the vehicle in front suddenly slowed, etc. The 5008 driver can set this to maintain a reaction time of between 0.9 and 2.5 seconds for a 'wake up' call if he or she strays too close to the car in front.

The easy and satisfying to drive 5008 comes with a pleasant ride that smoothes out lumpy roads while remaining comfortable, stable and predictable. That's not to say you can't press on because, helped by the decent body composure and accurate steering, you can. A stiffer suspension layout than on some of its rivals means minimal body lean; corners are taken tidily without unsettling your passengers — not what you'd normally expect from a people carrier! And thanks to the decent all-round visibility it's also easy to park.

The heart of any MPV has to be its seating configurations — in short, it's got to be a fully-fettled family holdall with a place for everything and everything in its place. That's quite a tall order but the 5008 comes up trumps.

The second and third rows of seats fold down one-handed and, equally important, can be returned to their normal positions very easily. All three individual seats in the second row can be folded, reclined and moved backwards or forwards over quite a distance as single chairs so everyone can set their own most comfortable legroom. The second row outer seats allow easy access to the third row: simply pull the release on a second-row window seat and the chair slides forward before folding itself up out of the way.

Don't need the rearmost two seats? Easy — one quick tug on a cord, easily accessed from the boot, and they fold away into the floor as self-contained units to leave a flat load surface. And if you're using all seven seats then you can use the underfloor bays used for storing the third row seats for additional storage.

While middle row travellers can make use of the sturdy pop-up picnic tables on the backs of the front seatbacks as well as select the fan speed for their own dedicated air vents, seats six and seven get built-in cupholders, door pockets and armrests as well as comfortable backrest recline angles. However, legroom is better suited to younger passengers or for shorter trips for grown-ups. Second row passengers — there's room for three — can pass the time watching DVDs or playing games on the 7-inch colour screens that are part of the on-board multimedia system integrated into the back of the front headrests. Also welcome are the mesh pull-out sun blinds for the second and third row windows.

We've already mentioned the 1.6-litre engine's paper performance but that doesn't tell you much about 'how it goes'. And with up to seven bodies aboard, 'go' it must. In fact, with 192lb ft of torque on tap from 1,750rpm, the 1,560cc turbodiesel does a great job. Not only is it quiet and refined (bowling along the motorway you can hardly hear it), but it runs smoothly and is hearty enough to keep the 5008 up there with the other traffic. In fact it feels surprisingly quick and will lope along European motorways at an unruffled 90mph. Our week's test average worked out to a very liveable 45.7mpg — and given that we don't drive to save fuel (in your best interests, you understand), that's an excellent result.

Not a great deal to say about the EGC (electronically-operated manual gearbox) other than that it worked fine on our test car. The only thing you do need to get used to is that there's no 'Park' position; just Reverse, Neutral and Auto with sequential manual selection off to the left. When you switch off the ignition the EGC puts itself into neutral and applies the handbrake for you. All very Star Trek-ish. With EGC you can drive the 5008 in either manual or automatic modes — a 'go faster' Sport option works in both settings. Control is by either steering column-mounted paddle-shifters or the more conventional selector lever on the raised centre stack.

Using the paddle-shifters is an easy way to drive if you want full control of the gears; or just leave it in auto to do the changing for you. Whichever method you use, it gels nicely with the relaxed character that marks out the 5008 from other MPVs. And, as we mentioned earlier, there's absolutely no fuel penalty for going 'auto' with this set-up — as it happens, you come out ahead of the six-speed manual for both acceleration and average consumption.

MPVs are also expected to excel at versatile load carrying. Here too the 5008 scores well. With five seats in use, the boot space is 512 litres; with the second and third rows folded there's 1,604 litres. Second, the front passenger seat folds flat so as to accommodate long objects that can reach as far as the fascia. Even better, the roller luggage blind fits neatly out of the way behind the middle row when not required. And when you're loading the 5008 over its conveniently low sill, the large tailgate protects you from the elements.

And as for oddments space, there's ample cubbyholes throughout the cabin to lose a family's clutter including especially large door pockets, a storage area below the steering wheel, a 'secret' drawer under the driver's seat, a huge 10.5-litre chilled centre console cubby and lidded storage bins in the second row floor.

Inside and out, the 5008 is smarter than the average MPV. It's also nicely refined, feels stable at motorway speeds and is relaxing on long journeys. And for families, its mix of practicality, versatility, comfort and five-star safety makes it a 'smart' buy. — MotorBar