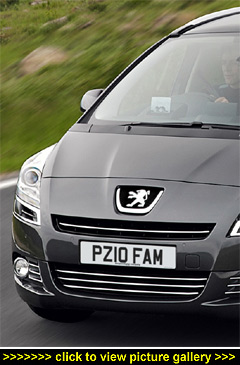 “MPVs or people carriers are big
business and Peugeot’s 5008
medium-sized MPV has quickly
become a family favourite — and
with five doors and seven seats
laid out in three rows, futuristic
styling, loads of practicality and
comfortable driving manners it’s
easy to see why...”

MPVS HAVE BEEN POPULAR since the early 1980's when multi-seat people carriers first arrived in the UK, although various American brands had what we now call 'day vans' long before that.

Today we have small, medium and large five- and seven -eat MPVs with petrol and diesel power options and you can be sure a hybrid is just around the corner. With the introduction of new generation MPVs such as the Vauxhall Meriva, Ford C-Max/Grand C-Max, Peugeot 5008, Citroen Picasso/Grand Picasso, VW Touran/Sharan and SEAT Alhambra, sales were at an all time high in 2010.

This year buyers will be offered the new seven-seater Vauxhall Zafira and Toyota Verso ranges, so the market will expand as customers consolidate their work and social motoring needs and their motoring costs into one affordable, do-it-all, nice-to-drive and good looking vehicle that doesn't shout 'family taxi'.

Launched in January 2010 the Peugeot 5008, with five doors and seven seats laid out in three rows, found favour straightaway with the motoring media and time and again received awards in its launch year. Now the latest models — required to meet 2011 Euro 5 exhaust emission standards — are on sale.

Today's Euro 5-compliant Peugeot 5008 seven-seaters range in price from Ł17,895 to Ł24,845. There's a choice of Active, SR, Sport, Envy and Exclusive trim and equipment levels with the option of 1.6 petrol and 1.6 and 2.0-litre HDi turbodiesel engines and, on some models, auto transmission options.

Having briefly driven the 5008 on its debut early last year, I have just renewed my time with this family-friendly package in the form of an Exclusive 1.6 HDi 112 with the EGC electronic automated clutchless transmission that costs Ł23,195.

The major change for this version is the new engine, which replaces the long serving PSA 110 HDi turbodiesel unit used by Peugeot, Citroen and others. Now in keeping with its new 'HDi 112' badging it develops 112bhp instead of 110bhp and in Exclusive guise, with 17-inch alloys and the EGC semi auto transmission, it is cleaner: CO2 emissions are 139g/km instead of 140g/km and as a result BIK company car tax drops from 20 to 19%. Vehicle Excise Duty remains the same, at Ł110 a year, as does fuel economy for the Combined Cycle — at 55.4mpg.

So in respect of running costs, it's worth paying the extra Ł550 over the manual transmission for the EGC six-speed semi-auto 'box but the driving experience is less refined. The EGC unit has neutral, drive or reverse modes plus a sideways position to engage the sequential gearchange option. This Tiptronic-type mode can also be operated from steering column-mounted paddles.

I found the EGC unit to be slow in operation in auto mode where it hung onto gears too long during acceleration and didn't engage fifth or sixth gears soon enough on winding country roads. Driving these automated manuals takes a different driving style and the accelerator needs to be 'feathered' at the change points to get the smoothest performance.

But with the transmission and engine electronics 'talking' to each other to supply the optimum fuel- and CO2-saving change-points, it becomes a sensible choice. It was good to use in slow moving or stop/start town traffic and good on open roads 'in the cruise', but in between it was dull and not very responsive — however, it saves on running costs.

The 5008 models all have ESP electronic stability programme as standard and an automatic electronically-operated handbrake with hill assist which people either love or hate. I'm in the latter camp as I find them generally slow to use.

The updated 1.6 HDi engine remains a four-cylinder common-rail turbodiesel unit but now has eight valves instead of 16 which at first seems a backwards step as most modern Euro 5 units use a 16-valve layout and many have a variable valve timing configuration. Still, having eight larger valves rather than 16 smaller ones seems to have provided better engine efficiency, lower friction levels (because of fewer components to operate) and it is lighter in weight.

The engine mapping has also been changed to enhance the efficiency. Torque is now 177lb ft from 1,750rm but this increases briefly to 191lb ft during the 'overboost' mode under hard acceleration. The latest version of this engine remains strong, flexible and responsive — and fuel efficient. My car's road test fuel economy was 44mpg covering all types of driving conditions. All in all, it's a good and capable workhorse.

In all other respects the Peugeot 5008 for 2011 remains very much the same. At 4.5 metres in length with seating for seven and boot space ranging from 679 litres (with all the seats raised) to a huge 2,506 litres with the middle and rear rows folded flat into the floor. The seat raising, lowering and sliding operations are all easy to use.

The 5008's looks are very aerodynamic with its TGV high-speed train-style front-end leading to what appears to be a long body. The steeply raked windscreen and front A-pillars look stylish but the B-pillar is moved quite far forward to allow for wide, hinged rear side-doors for easy access to the middle and third row of seats.

The result of the forward B-pillar positioning is poor headroom for the front door frames and a loss of side visibility for the driver. Headroom inside is generally good, apart for the third row passengers. Envy and Exclusive versions have a full-length panoramic glass roof which makes the interior light and airy.

All models have air conditioning, electrically-operated front windows, individual fold-flat seats for the second and third rows, a five star safety rating and electronic stability programme. Alloy wheels and satellite navigation appear on SR versions and above. Rear electric windows, cruise control and a rear parking aid are standard for Sport versions and above. The head-up display is included for Envy and Exclusive versions and distance alert is also included in the very comprehensive Exclusive version.

The interior is really well laid out and of high quality. My only gripes are that the Exclusive has four control stalks plus the two EGC transmission gearchange levers all mounted on the steering column behind the wheel where they are masked from view. The sound system is good but the volume control is tiny and not easy to use. Other niggles: the EGC semi-auto transmission is an acquired taste as it can be slow to change gears, low headroom through the front passenger doors, B-pillars restrict front side visibility for the driver and the rearmost row of seats have reduced headroom.

That said, it's not hard to see why the 5008 has become such a family favourite — it offers futuristic good looks and a practical and versatile family-friendly character with massive load-carrying ability. Additionally, the uprated engine is flexible and responsive and the EGC transmission reduces CO2 emissions and improves fuel economy. On top of all that, it rides comfortably and drives and handles well. — David Miles