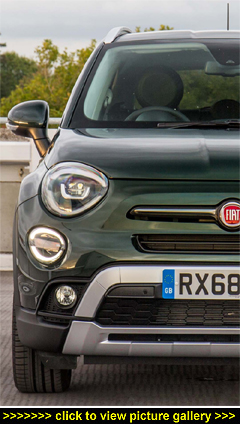 “Every week yet another new SUV
goes on sale, making it easy to
overlook the number of already
well-proven SUVs being updated
rather than superseded, many
of which are just as desirable as
the newcomers...”

AT THE COMPACT END of the SUV market one such revised and refreshed model range came to the UK at the end of last year — the revitalised five-door compact Fiat 500X, AKA the 'original Italian Crossover'. Although a compact SUV, it is one of the largest models in the popular Fiat 500 family which also includes hatchback and convertible city cars, and the 500L small MPV.

For the 2019-model year 500X, in come tweaks to its exterior styling, revised engines and an auto transmission; out go 4WD and diesel versions. The most noticeable exterior changes are the new LED headlights, LED daytime running lights, and LED rear light units. But one thing remains the same — it retains its rather 'chunky' muscular image.

The 500X comes in two body styles: Urban and Cross. Both now put their power down through the front wheels and offer more trim and equipment levels to choose from: Urban, City Cross, Cross Plus, and the recently-added S-Design.

Prices start from Ł17K and range up to Ł23K. Most new car-buying retail customers for most brands tend to favour PCP finance purchase; go down that road with the 500X range and a 48-month contract starts at Ł159 per month for the lowest price model, rising to Ł239 a month for the top spec version.

Regardless of the trim/engine combo you opt for, the major thing the 500X has going for it is its distinctive styling — okay, it won't be to everybody's choice but at least it's different from the glut of similar-sized compact SUVs currently on sale. Comments passed to me during my driving spell ranged from 'ugly' to 'interesting', so it's clear that the 500X has the 'Marmite' factor. Fiat see it appealing to younger buyers or perhaps serving as a family's second car, although its compact size doesn't quite fit with school-run duties.

Most likely, and from real-world users I've spotted, it's likely the 'young at heart' empty-nesters who will enjoy the 500X most as an alternative to a Nissan Juke, Vauxhall Mokka, Peugeot 2008 or even MINI Countryman. I see numerous older couples in my locality driving a Mokka — they like the price, the compact size for ease of parking, low running costs and the higher ground clearance which makes getting in and out of the vehicle easier.

To those 'plus points' the Fiat 500X can add unique and fashionable styling, compact SUV functionality, and a huge array of personalisation options (these have undoubtedly played a major part in the 500X's popularity — over 1.5 million sales globally) at prices reasonable enough to tempt those up for a change.

The range-topping Ł23K 147bhp (150hp) Cross Plus auto I've been driving this week will suit a wide range of customers — but only if they don't deem 4WD a necessity. Of course, there are numerous extra-cost options that can be added and my test car had loads of them, pushing the price up to Ł25,780 at which budget level you're into a much larger choice of roomier, medium-sized SUVs.

Get inside this latest 500X and you'll find detailed changes with more technology, better ergonomics in a notably refreshed environment. The fascia has a coloured facing panel — matched to the exterior paintwork — running more or less the full width with the usual central touchscreen. The quality and fit of the trim and upholstery looks to have improved with soft-touch elements.

Traffic Sign Recognition, Intelligent Speed Assist and Lane Assist systems are standard on all versions, as too are the latest in connectivity with a Uconnect seven-inch HD LIVE touchscreen with DAB radio, Bluetooth, Apple CarPlay integration and Android Auto compatibility. Separate from the touchscreen functions are easy-to-use heating and ventilation controls together with dual-zone automatic AirCon.

Externally, the Cross Plus spec also gets you a set of 18-inch alloy wheels, all-road bumpers with protective inserts, and front fog lights with a cornering function. However, if you want leather upholstery that wil be an extra Ł850; front parking sensors add another Ł300; plus an electric sunroof costs a further Ł950. Fiat charge Ł650 for the Active Safety Pack, which really should be a standard item. Even a space saver spare wheel sets you back another Ł100, otherwise you have to make do with an inflation kit.

The chunky looking 500X is underpinned by the platform from the Jeep Renegade SUV, another member of the Fiat Chrysler Automobiles family. However, as mentioned earlier, 4WD models have now been deleted from the 500X line-up.

The four-cylinder 1.3-litre direct injection turboed engine is one of two new 'FireFly' generation petrol units, introduced to comply with the latest EU regs. Like its predecessors, it's a free-revver that's eager to please and with 199lb ft of torque from 1,850rpm it proved to be both responsive and well suited to its partnership with the new six-speed dual-clutch automatic transmission.

There's no need to keep the engine in its relatively high rpm powerband because the autobox does that for the driver, so the flexibility moving from low to medium to higher speeds is good, although not always seamless. On a few occasions there was some indecision as to what gear was needed — mainly between second and third — especially after first starts on a cold day. But overall the new engine and autobox proved to be a nice combination to drive.

As for performance, top speed is a healthy 124mph and zero to 62mph takes a brisk 9.1 seconds. The official Combined Cycle fuel consumption figure is 43.5mpg and during my week behind the wheel, covering everything from local roads to motorway journeys, the real-life figure was 36.5mpg.

The ride comfort, even with the larger 18-inch wheels, was good with only the worst potholes transmitting a thump into the passenger compartment. The handling was neat and nimble given the relatively tall height, and it was easy to park due to its compact length and good visibility.

For the record, there's limited rear seat space and legroom and the boot measures 350 litres; however, dropping the 60:40-split rear seatbacks expands this to 1,000-litres. And should you need to tow, you can pull a braked 1,200kg.

For those wanting a fashionable compact SUV that's not a clone of every other on the road, this 500X will meet their needs. With its unique looks and wide range of personalisation options plus a lively new petrol engine and neat and nimble handling, the 500X's blend of fashion and function give it a dare-to-be-different appeal. ~ David Miles