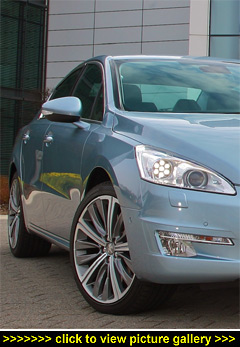 “The Peugeot 508 is firm proof, if
proof were needed, that the market
for big family cars is bursting with
brilliant cars. In 2011 there are some
stunningly-talented models to
choose from — the Ford Mondeo,
Mazda6 and VW Passat to name
but a few...”

LET'S GET STRAIGHT TO THE POINT: the 508 is up there with the best of them. There have been some stodgy, turgid Peugeots in recent years but the 508 is not one of them — it's dynamically accomplished, thoughtfully designed and beautifully built.

In styling terms, the new 508 is best described as conservative, especially the SW estate. Dare I say it even looks a bit Volvo-esque? I do dare; indeed I think that Peugeot has deliberately tried to 'Northern Europeanise' its large car offering.

No question, the new 1.6 e-HDi diesel engine is the headline-grabber of the range. A mere 109g/km of CO2 emissions for a car of this size is remarkable. If you're a company car driver, you stand to save quite a lot on tax; and annual VED road tax is just Ł20.

With only 112bhp, the e-HDi isn't the last word in performance (0-62mph in 11.9 seconds) but it's got plenty of torque, and in-gear acceleration feels quite lively — just so long as you keep the revs above 1,500rpm; below that the turbo lag is very noticeable.

You can only buy the e-HDi with Peugeot's EGC automated manual gearbox (other engines come with manual and fully automatic choices). The EGC 'box combines the ease of use of an automatic with the option to change gears manually using the gear lever or steering wheel paddles.

In normal auto mode, the EGC transmission changes gear very early and there's a certain amount of lurch between the ratios. You can alleviate this somewhat by switching to the sharper 'Sport' mode, although doing so does affect fuel economy.

Speaking of economy, the e-HDi's headline figure of 64.2mpg is mightily impressive for a car that's 4.8 metres long and weighs 1,560kg (in size terms, the 508 sits between the old 407 and 607 models, both of which it replaces in one swoop). Some diesel superminis — and indeed even hybrids — don't come close to the 508's frugality.

Peugeot has finally got its act together in the suspension department. Firm springing gives the 508 a Germanic feel (a bit like Citroen's C5), and it corners with great confidence while decent steering helps deliver an impressive cornering experience. The only downside of the firm springing is a rather harsh ride over poor road surfaces; on smoother tarmac, however, the 508 is a very comfortable machine.

Another highly impressive aspect of the 508 is the quality of the interior. The solid 'clunk' of the doors shutting, the materials and fit and finish are all now chasing premium brands very hard.

The sheer number of gadgets available will be causing headaches for the people whose job it is to differentiate premium brands like Audi and BMW — 508 options include a colour head-up display, parallel parking assist, massage seats, a superb SatNav system and quad-zone climate control.

There's lots of space inside, both front and rear. The SW estate has an even bigger boot volume than the saloon (560 versus 515 litres) and can be expanded to 1,598 litres by folding the split rear seats (a very easy exercise). Even the saloon has split/fold rear seats and can accommodate up to 1,381 litres. Another clever feature is the SW's luggage cover which can be 'pinged' forwards simply by touching it.

The 508 is on sale now priced from Ł18,150 for the 1.6 VTi Access version. But the star of the range is undoubtedly the 1.6 e-HDi which only costs an extra Ł900. Should the competition be worried? Absolutely. — Chris Rees