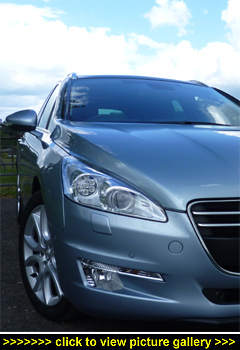 “Take a deep — clean — breath!
From September 2014 legislation
will force car-makers to drastically
cut the nitrous oxides (NOx) emitted
by their engines. NOx is not nice —
it’s the dirty stuff that helps wreck the
environment as well as your health.
Commendably, Peugeot’s BlueHDi
models are already ahead of the
game...”

CURRENTLY THE NOx LEVEL for diesels is 180mg/km — the forthcoming Euro 6 standard slashes that almost two-thirds, to 80mg/km, bringing diesel engines closer to the 60mg/km that's standard for petrol engines. Peugeot's response — well ahead of the pack — has been to introduce their BlueHDi turbodiesels, starting with the 2.0-litre units powering their 508 models.

Peugeot's 'premium' 508 range offers discerning customers traditional four-door saloons as well as svelte five-door SW estates. Price-wise, the saloons kick-off from a pony (Ł500) under Ł20K with the range-topper — the diesel-electric Hybrid4 4WD — coming in at Ł32K. The sleeker-looking estates start at under Ł20K and run to Ł34,145, which will buy you a Hybrid4 RXH with 4WD.

Basically the BlueHDi versions give you more of a bang for your bucks, as well as fewer CO2 emissions (and, of course, substantially less NOx). The 150bhp 2.0-litre BlueHDi turbodiesel only emits 110g/km of CO2 so there's no road tax to pay in the first year; after that it's just Ł20 per year. The 150bhp 2.0 BlueHDi comes with a six-speed manual 'box and, in penultimate Allure spec, costs Ł27,145. And you do get a great deal — in more ways than one — for your money.

The big 'Blue' news is Peugeot's NOx-busting BlueHDi technology — which just happens to be the most effective diesel emission control system on the market. Without going geeky, all you really need to know is that NOx emissions are converted into two bi-products: nitrogen and water. All the owner has to do is top up the liquid AdBlue once every 12,000 miles. That's it — technology does the rest.

But if you drive less than 12,500 miles in a year you may never have to add the AdBlue yourself because it's included in the 12,500 service schedule. For the record, if you need to, the necessary AdBlue refill only costs around Ł20 and it's easier than topping up your car's screen wash bottle.

Cleaner, greener… but is it any meaner? Actually, the BlueHDi engine packs a decent punch — maximum speed is 130mph, and the benchmark zero to 62mph is despatched effortlessly in a brisk 10.1 seconds. While the official fuel economy for the Combined Cycle is 67.3mpg, a week's hard driving over a mix of roads — from morning 'urban crawls' to fast streaming rush-hour motorways — was not far off that and not at all disappointing, with a credible real-life 54.3mpg average that just about any driver should have no trouble replicating.

The 508's 2.0 litre turbodiesel and six-speed manual 'box go together like the proverbial horse and carriage — the six-speeder change has well chosen ratios to match the 2.0-litre's smooth and quiet power delivery, backed by 273lb ft of torque on hand from 2,000rpm. Overtaking manoeuvres are quick and safe thanks to the strong — and always willing — acceleration; cruising is blissfully stress-free, helped by crisp pick-up in top gear to nip past Centre Lane Owners Club members.

With a large helping of French élan, the handsome 508 SW estate not only trumps its sister saloon version for looks, but also for versatility. The long, sleek, coupe side profile makes its 4.8m length look even longer and leaner. Parked next to a similarly sized Audi, BMW or Mercedes estate, the 508 SW has the ability to go head-to-head with any of them in the image stages — particularly finished in the fetching Alpine Blue metallic of our test car. A chrome-trimmed glasshouse plus a set of striking 18-inch alloy wheels add to the premium 'jewellery'.

Getting in couldn't be simpler: with the electronic key in your pocket (or handbag), the 'hands-free' keyless system unlocks the car when you're a couple of strides away; once inside just press the Start button to fire-up the engine. Then, when you exit the car simply brush your hand over one of the handles and the car locks itself. Adding to the convenience is an easy-to-use electric parking brake that releases itself as you drive off and applies automatically when you stop and switch off.

As outside, so inside: the 508 cabin is a very polished piece of automotive architecture. Up front, the cabin is elegantly divided between front passenger and driver by a central control console that flows down from the fascia.

Both visually and physically the 508's cabin is a fine place to be; the leather seats are smooth to the touch and the adjacent trim is both well fettled and well fitted. Crowning the inviting cabin ambience is a full-length panoramic glass roof — it stretches from the header rail all the way back to the rear headrests — that floods the 'living area' with natural light. Too exposed for you? No problem — a powered one-shot sunblind provides privacy against low-flying overhead paparazzi drones!

Housed on the central console aft of the gear lever is the rotary controller and 'shortcut' buttons for the foolproof infotainment system. In SatNav mode the 3D imagery is brilliant with easy zoom and the analogue instrument pack is smart and crystal clear and, best of all, there's an excellent heads-up display for the road speed, cruise control, speed limiter and navigation instructions (for instance, the next turn or roundabout and which exit to take when you get there). The leather-wrapped, flat-bottomed, three-spoke steering wheel also houses a number of important switches and buttons.

Good bolstering and especially good power-adjustable lumbar support from the comfortable front seats make them particularly pleasant on longer journeys. A fist of headroom, loads of legroom (even for six-footers), and a wide footwell all add to the comfort. And thanks to three-stage heating, excellent during the cooler months (although we've also found heated seats useful, not just in the winter, but on long journeys to relieve the aches of a bad back). The driving position is spot-on and, thanks to a large windscreen, visibility is first class.

Just a few of the many nice touches worth a mention: the cupholders that pop-out from the fascia (so much easier to use); large door pockets that hold 1.5-litre bottles; easy-release front headrests that adjust perfectly to your head and neck; and the parking system that checks a roadside space for size for you before you attempt to get in (so face-saving on today's tightly parked roads).

Those travelling in the back of a 508 SW can truly relax in the almost semi-reclined seats. The spacious rear cabin also offers plentiful head, leg and knee room. While two adults can laze either side of the wide centre armrest (matched by wide, sloping outer armrests on the doors), the flat floor doesn't suffer the usual transmission tunnel intrusion so there's plenty of foot room for a third middle passenger.

For families, the competition amongst the children will not be for the usually prized 'riding shotgun' front seat — but for the freedom to stretch out in the back! And enjoy the views through the long side windows. Getting in and out, both front and rear, is a cinch courtesy of the long doors.

Plenty of accommodation space in a family-focused car is not much use unless it can, at the same time, carry all of its passengers' luggage. No problem here — the 508 SW is a queen among baggage carriers with a massive 660-litre boot. Access through the wide tailgate is unhindered, and loading is a doddle due to the low (knee-height) sill. Plus, having remote, powered opening (and closing) is exceedingly practical. Useful too are the stretchy luggage net, bag holders, load-through hatch and quick-release rear seatback levers — pull them and the 60:40 split seats spring forward to fold themselves.

With the rear seats down there's a substantial and flat-floored 1,865 litres of space begging to be filled. If that's not enough then the 508 SW will tow a braked 1,775kg. In addition you'll find a further 48 litres of additional storage under the boot floor along with a space-saver spare wheel. Another great idea is the rigid boot carpet — it can be folded to divide the boot into three separate compartments to keep smaller items secure.

While a compliant ride underpins the 508's family duties, it's also happy to indulge a driver who likes a bit more from their driving. Armed with precise well-weighted steering and confidence-inspiring brakes with decent and progressive pedal feel, the 508 SW is surprisingly nimble; and well-equipped if you're in the mood — or have a need — for some satisfying press-on driving. And while the 508 is a big car, the excellent visibility from behind the wheel makes it both easy to park and, equally important, easy to place.

All of which is a nice fit with the decent amount of torque on tap and which, combined with its easily accessible handling abilities and reassuring front-end grip, makes the 508 SW a well-polished driving machine that covers ground — especially dual carriageways and motorways — with a refined and smooth-riding gait; even poorer road surfaces feel they've just had a makeover as the 508 rides serenely over them.

Also fitted is Peugeot Connect Navigation system with 7-inch screen and Bluetooth, auto lights and wipes, auto-dim rear-view mirror, Peugeot Connect SOS and Assistance (pinpoints the exact location of the vehicle and enables the dispatch of appropriate emergency services in the event of an accident), Xenon directional headlamps that improve vision in corners for better night-time driving at speeds up to 100mph, Smartbeam Assistance (intelligently maximises the time you can keep main beam on and automatically switches it on and off for you), cruise control with speed limiter, on-board computer, front and rear parking aid, one-touch power windows, tinted glass, automatic electric parking brake with Hill Assist, and 18-inch alloys.

For those lifestyle buyers looking for a premium feel to their wheels but not inclined to fork out a premium price, the super-clean BlueHDi 508 SW offers a luxuriously kitted-out, comfortable, spacious and versatile family 'holdall' that drives as well as it looks and will give pleasure to those behind the wheel as well as those just along for the ride. — MotorBar