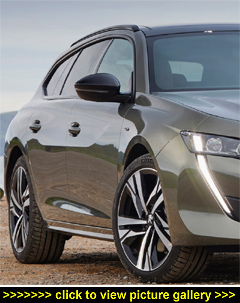 “It was the French who first came
up with the hot air balloon, the
hairdryer, canned foods and
Mayonnaise. Continuing to bring
the world exciting new things,
French carmaker Peugeot has
just given us a svelte new take on
the shooting brake...”

WE ARE, OF COURSE, TALKING about the all-new 508 SW. For many years the go-to wagons for estate car customers wore Peugeot badges. They were good-looking, could lug huge loads without a murmur of complaint, and were amazingly comfortable even on road trips stretching to hundreds of miles. This latest one not only builds on that tradition but wraps it in a bodyshell that will tempt lifestyle buyers out of their German estates.

Bold and sleek, the 508 SW's thoroughbred lines are quick to trigger the WOW factor — having seen it for the first time in the metal, many immediately consider it cooler and more desirable than most of its executive and premium rivals. What is true is that this well-dressed wagon is a Peugeot estate like none that have gone before. From whatever angle, the view is eye-catching: the haunches and tail treatment cleverly camouflages the big boot and loadbay on the other side; at the nose its clean-cut face is enhanced by classy design cues and LEDs; and from the side its sculpted profile is capped by a lean and sporty glasshouse.

To go with its swish looks you'd expect some powerful choices to fill the engine bay. And there are: a 220bhp PureTech petrol along with a 178bhp version. And to mesh with a world running out of energy there are also economical BlueHDi turbodiesels: a 1.5-litre with 129bhp and a 2.0-litre with either 160 or 174bhp. Activists who really do need to drive can take heart because the 508 eco-cavalry — in the shape of a plug-in hybrid — is on the way. Whatever they drink, be it unleaded or diesel, most 508s have two-pedal, eight-speed powertrains.

If you think the outer skin is eye-catching then swing open one of the front doors. Your first surprise may be the frameless windows — you certainly don't see many of those around. From a practical viewpoint they're great, especially when trying to get out when parked in a tight bay. Finding yourself 'pinched', just power down the window first and you'll get out a lot easier.

Once behind the flat-bottomed, multifunctional leather-wrapped wheel you'll face a smartly configured contemporary dash with ambiance-boosting carbon-weave finishing. Smack-bang-centre is a free-standing, tablet-style touchscreen underscored by a strip of über-tactile satin chrome 'piano-key' toggle switches for quick access to the touchscreen's functions.

But the real eye-opener is the core of the 'i-Cockpit' — a 'heads-up' 12.3-inch digital instrument display offering configurable views. Mounted in a slim pod that can be easily seen over the flattened upper rim of the compact steering wheel, its crisp and colourful graphics keep you fully informed via a variety of views (classic dials, navigation, night vision or a fully personalised set-up) of all driving data including posted speed limit signs along with Stop, One Way and No Overtaking road signs.

The cabin is snazzily idiosyncratic but put together with quality materials and attention to detail that wouldn't be out of place on a premium German motor. The seats appear to be set low but that's really because the SW's slimline roof is closer to the ground than that of your average full-fat estate. Letting in extra light (and real fresh air) is a panoramic glass sunroof that crowns the front cabin: with powered tilt 'n' slide it's a welcome feature enhanced by a one-shot-op blackout sunblind — always nice to have a choice!

Settle back in either of the sporty-looking front seats and you'll be held and supported lovingly. While there you can be warmed up, cooled down and even massaged — there are three settings for each plus a selection of massage programmes and intensities to choose from including the intriguing 'Cat Paw'.

The chairs are power-operated with extending front seat cushion edges, lumbar and base angle adjustment. The driver's left-foot has room (and a rest) to relax as does the rest of your body thanks to a fist of headroom and plenty of elbow and shoulder room. A two-setting driver's seat memory will suit those who like to share the driving duties.

In keeping with the trend for fingertip control for everything, the 508 SW's ten-inch hi-def touchscreen is the hub for the infotainment, SatNav and dual-zone climate control. With smartphone levels of responsiveness it's a doddle to use: the information is easy on the eye and the 3D mapping foolproof. There's also voice recognition for radio, navigation and telephony, Mirror Screen, Mirror Link, Apple CarPlay, and Android Auto for smartphone interaction, Bluetooth, and a DAB radio.

Also included are enough USB ports to ensure all your passengers' phones and devices stay fully charged. Smartphones are charged wirelessly in a convenient 'bed' beneath the centre tunnel that's easily accessed from either front seat.

A bugbear of too many modern cars is a lack of in-cabin storage. Not so the 508 SW which provides 32 litres of it spread between a large central illuminated storage compartment between the front seats with butterfly-wing-opening padded armrests, a deep, lidded bin alongside the selector lever, twinned dual-use cupholders, capacious bottle-holding door bins, and a glovebox that will hold more than just a pair of gloves.

On the move the cabin is quiet and well insulated from the outside world and there's plenty to make life sweeter for the driver such as the efficient dual-zone climate system, electric parking brake (includes hill assist), rear camera with Grid, 180-degree, and Overhead views, night-vision (detects the presence of pedestrians and animals up to 200 metres beyond the range of the headlights and displays the images in the heads-up instrument display panel; even at Ł1,300 an easily justified extra), driver attention alert, drive-away auto door locking. And should you ever have a problem, Peugeot's Connect SOS & Assistance feature can be used manually although it also triggers automatically in an accident for a rapid response from the emergency services.

The GT Line sits just beneath the range-topping GT and First Edition trims but even so it's fully loaded with as much kit as you'll ever need. Its standard equipment fills a long list, and in addition to the many items mentioned elsewhere you'll also find keyless entry and locking, keyless start, cruise control and speed limiter, powerfolding heated door mirrors, a frameless auto-dimming rearview mirror, four one-shot windows, auto lights and wipes, alloy pedal set, dark tinted rear side and tailgate glass, and a set of diamond cut two-tone 18-inch alloy wheels.

The chassis certainly feels as though Peugeot's engineers had comfort in mind when they signed-off on the suspension and, as its 'grand tourer' lines suggest, the 508 SW rides well, making light work of consuming motorway miles and pandering to passengers aboard for the long haul; even in town, rolling on the bigger optional 19-inch alloys, urban undulations are pretty much seen rather than felt.

Press the Start button and the turbodiesel is ready for business. We've been driving the 1.5-litre 'clean' BlueHDi engine which generates 128bhp. For many drivers its official combined cycle figure of 52 to 62mpg will be a big pull but with 221lb ft of torque it's also got ample physical 'pull'. It feels lively; eager enough, in fact, to post a 10.1-second zero to 62mph figure. The 129mph top speed is perfectly at home on British roads and more than adequate, too, for any Continental touring you may have in mind.

Peugeot's eight-speed torque-converter automatic is a smooth and unobtrusive self-shifter — even when you're in a hurry it keeps things unruffled. Pootling around town is a stroll in the park for it, but when you want to really up the pace then either use the paddleshifters on the wheel when in Drive or flick to Manual mode where you can finger-dance up and down the ratios to your heart's content. Our rule for the sharpest acceleration in any auto is that paddles trump kickdown every time, and that's true for this 1.5 turbodiesel-autobox powertrain. Alternatively there's always Sport mode, which keeps the engine bubbling nicely.

A week's driving in pretty foul weather on a wide mix of roads (many of them near-flooded) saw it chalk-up an impressive real-life consumption of 53.2mpg. Bearing in mind that the official 'high' figure is between 59.6 and 71.2mpg and and there's also an Eco mode (which we barely used), laid-back drivers should see even better economy that our hard-pressed roadtest team.

The 508's small steering wheel initially feels track-like but you quickly sync with it — and you'll be particularly glad of it when 'wheel winding' to manoeuvre into a tricky parking space. The 4.8-metre-long SW sits atop a well-balanced chassis with reliably 'safe' front wheel-drive and it's confident enough in its identity not to be over-concerned with playing the 'sports estate'. That said, it still does quick corners while honouring its family and lugging duties. The brakes (with brake energy recapture) pull you up well whatever weight is aboard. Overall this SW is an effortless, smooth and refined driver and a fine antidote to today's often fraught driving conditions.

Anyone who usually takes (or is allocated) a rear seat wants to know one thing above all else — Is there ample room for a six-footer to sit behind a six-footer directly ahead of them? Happily, the SW's rear cabin obliges. Despite sitting about six inches higher than those in front there's also enough vertical inner space for there to be a fist of light between the top of your passengers' heads and the roof lining.

Adding to the satisfaction of sitting in the back are dedicated air vents, net seatback pouches, big rear door bins, a wide padded drop-down central armrest with built-in cupholders, and backrests set at a relaxing angle. Long side windows offer good views out.

Should you have need to fit three adults side-by-side across the rear seat all of them will at journey's end still be on speaking terms, not just with each other but with you too. Naturally there are Isofix child seat fittings (outer rear and front passenger seats) plus powered child locking functionality on both the rear windows and doors.

The tailgate provides unhindered access to a large, family-friendly 530-litre boot with a uniform floor-space and a helpfully low loading lip (one of the lowest in its class). Pull the release handles in the boot to flip down the 2/3:1/3-split rear seatbacks and the boot expands to form a very generous, seamlessly flat-floored 1,780-litre loadbay. If you're dogged with dawgs, you really can carry a pack of pooches in the SW. Worth pointing out is that the low loading sill not only makes for easier loading and unloading of bulky or heavy items but also provides easier access for your four-legged friends.

More versatility comes in the form of a ski-hatch while floor rails both sides of the boot with adjustable tethering hooks let you secure items exactly where you need them. Another appreciated touch is the rollerblind load cover that automatically rises up (if you want it to) with the tailgate for quicker access. When not in use it stows away in a designated space under the boot floor. Outside there are roof bars or you can tow — assuming you can find something to match the 508 SW's style statement image, then hitching up to a braked 1,500kg is no problem

In this world you're either a follower or a leader. Choosing to drive this Frenchie places you defiantly in the latter category. Whatever you're planning on carting around — kids, dogs, lifestyle and sports gear, or just plain cargo — this very practical shooting brake will serve you right. Better still, its mischievous hint of Parisian ooh-la-la will brighten up every mile of your travels. ~ MotorBar