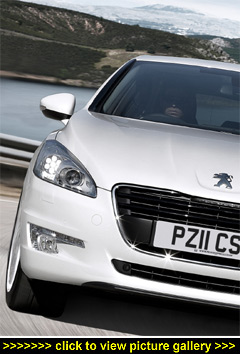 EFFICIENCY, IN THESE TAX-HEAVY FINANCIAL DAYS, is the watchword for both car makers and car buyers — and it's all about achieving good miles per gallon and retaining decent on-road performance whilst producing less tailpipe CO2.

Sounds an impossible task but not so for Peugeot's new 508 models which have a range of fuel-efficient engines that includes a 112bhp 1.6-litre turbodiesel unit coupled with a micro-hybrid Stop & Start system and clutchless electronically-controlled six-speed manual gearbox which emits just 109g/km of CO2. This means no road tax payments for the first year and then a mere Ł20 annually thereafter. Equally good, the Combined Cycle fuel economy is 67.2mpg — and company car drivers will be impressed by the very low 13 per cent Benefit-in-Kind rating.

The 508 will sell against the likes of the Audi A4, BMW 3 Series, Ford Mondeo, Mercedes C-Class, Vauxhall Insignia and Volkswagen Passat — a sector that's been hit hard by the recession with customers downsizing even before the recent financial problems became obvious. Over the past ten years this segment of the market has seen sales drop by over forty per cent.

That noted, Peugeot have got off to a healthy start with their new 508. Well before the car had actually been seen in the metal, Peugeot had a sales target of 100 508s for the first on-sale month — but actual orders were ten times that at over a 1,000. With only 6,000 508s available this year (and 8,000 for 2012), it looks as though demand will outstrip supply, which has the added benefit of boosting residual values — more good news for customers!

The engine line-up consists of 1.6-litre petrol units with 120bhp (normally aspirated) or 156bhp (THP turbocharged) power outputs. The 120bhp unit is fitted as standard with the six-speed EGC automated manual gearbox, has 144g/km CO2 emissions and an annual road tax bill of Ł130. The 156bhp turboed unit has the choice of manual or auto transmissions with CO2 emissions of 149 and 164g/km and first year road tax of Ł130 and Ł165 respectively.

Prior to the 508 Saloon and SW models arriving with UK dealers, I had the opportunity to sample three different diesel units in the saloon and estate body styles. The headline model is the new 1.6-litre e-HDI 112bhp/202lb ft micro-hybrid model with the EGC electronic and clutchless manual gearbox. It drives like an automatic and will be a popular choice because of its low CO2 emissions.

At present, tailpipe emissions are 115g/km but from July they drop even lower — to 109g/km, which means Ł0 road tax in the first year and then just Ł20 a year thereafter. The low 13% BIK company car tax is another plus point, as too is the official 67.2mpg Combined Cycle fuel economy.

Driven in a real-life mix of stop-start town traffic, country roads and motorways, my 115g/km CO2 version of this engine returned 45.5mpg against the official 64.1mpg figure.

The EGC transmission can be an acquired taste because the driver has to be sympathetic, allowing it time to change between gears and prompting smooth shifts by just easing off the accelerator pedal. It works better — and faster — by using the sequential gearshift lever or paddles-shift levers mounted on the steering column.

Peugeot's 'micro-hybrid' tag has nothing to do with batteries powering the car; instead it uses a double-action alternator for the Stop & Start system to provide a boost of power to spin the engine quickly back into life in its Start mode once your foot is lifted off the brake pedal during stop-start driving. The alternator also 'captures' power during braking conditions to boost the electric power supply for the Stop & Start process. Unlike most other similar systems, this still operates if the weather is really cold and when all of the vehicle's other electrical functions (such as lights, wipers and air conditioning) are being used.

The second turbodiesel engine I drove, the 140bhp/240lb ft 2.0-litre HDI unit with a six-speed manual 'box, would be my personal choice. With more power and torque, it's faster during acceleration and serves up more 'grunt' and flexibility in the low- to mid-range. And the fuel economy and CO2 emissions aren't hit hard by opting for a 'nicer drive' either.

The Combined Cycle figure is officially 58.8mpg but I managed 52.2mpg on test. Its 125g/km CO2 rating incurs a Ł0 charge for the first year's road tax and then Ł95 a year for year two onwards. Company car drivers will pay 18 per cent BIK but the extra cost over the e-HDI power unit is definitely worth it as the more powerful 140bhp unit is certainly a more capable performer.

The third engine I tried was the new 204bhp/338lb ft 2.2-litre HDI unit and this comes as standard with a six-speed auto 'box. As you'd expect, this is the fastest and most refined version to drive and is available only with GT trim. This equipment level is very high but it puts the overall cost of the 508 up considerably — to nearly Ł29,000 for the saloon and almost Ł30K for the SW estate. And that is Audi, BMW and Mercedes premium brand territory and a price too high.

The 204bhp powerplant's fuel economy and taxes will hit the pocket harder, too: the Combined Cycle figure is 47.8mpg and in real-world driving my test car recorded 37.7mpg. CO2 is 154g/km so your first year road tax bill will be Ł165 and the BIK duty jumps to 22%.

Style comes after performance and there is no doubt that the 508 looks very classy and would definitely look good on most people's driveways.

The side profile has the now-popular four-door coupe-esque roofline capping a high waistline. At the front, the bonnet line is high with a new-look elongated Peugeot family 'floating grille'. The front and rear ends are rounded and overall give a moulded appearance. It's a shame that the sides of the 508s are not defined by more sculptured lines but the slightly flared wheelarches and curved aerodynamic sills do lend the 508 a sense of speed and pace.

Inside, the 508 is at its best. It looks very smart and the quality feels very good. This is an area in which all recent new Peugeot models have shown considerable improvement. Further attention has been given to make the seats more durable so the 508 will still look fresh and unworn after its initial period of ownership. It's a roomy cabin with lots of boot capacity in the saloon (545 to 1,381 litres) and load space in the estate.

I expect users will feel quite happy with the leg and headroom front and rear. All the switches and controls are neatly sited and easy to use so the company car driver, in particular, will enjoy his (or her) long hours driving this grand tourer.

The 508's handling is quite sharp; it's a biggish car but feels quite agile and has plenty of front end grip — turning into fast corners is done with precision and without fuss. Ride comfort is also generally good although our poorly patched roads can play havoc with the 508's ability to cope with shocks and bumps due to the suspension's underlying stiffness.

Against? Some models are expensive, stiff ride control and somewhat slab-sided styling. On the plus side, you get distinctive styling inside and out, a high quality and well laid out interior and a wide choice of fuel-efficient models which offer low tax charges.

Overall, there's no doubt that the 508 is a big improvement over the 407 and 607 models it replaces but it is a tough market sector with strong competition and fierce pricing. However, with a rejuvenated Peugeot UK dealer network behind it, the 508, in its most fuel-efficient and low taxation incarnations, stands a good chance of succeeding. — David Miles