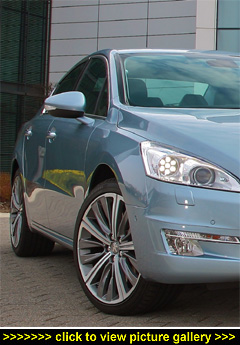 “If you’re buying a large car these
days, diesel is the only way to go.
Thankfully the era of hair-shirt
diesels is long gone and you now
have a huge choice of engines,
from ultra-eco CO2-misers right up
to high-power mile-crunchers that
can give GTIs a run for their money...”

PEUGEOT HAS FILLED THE ECO END of the market with its 1.6 e-HDI diesel. This may be the headline-grabber of the range — with its 109g/km CO2 figure and economy of 64.2mpg — but it's hardly the last word in performance. Its mere 112bhp is paltry, and made worse by its EGC automated manual gearbox which suffers from an insufferably annoying lurch between the ratios.

Right at the opposite end of the 508 diesel spectrum is to be found the 200 GT, Peugeot's high-performer in the range. There's certainly no shortage of poke: the GT has a healthy whack of power, peaking at 201bhp. Low-down torque is also superb, with fully 338lb ft available at 2,000rpm So here's a car that's rapid without being silly; a real mile-muncher of a machine.

It also benefits from a pukka automatic transmission. While the EGC gearbox in the 1.6 e-HDI eco versions may maximise fuel economy, it's frankly horrid in everyday use: jerky, unaccommodating and not at all intuitive.

So it's a great pleasure to get back to a 'proper' automatic gearbox; one that works super-smoothly. After all, that's what autos should be about. The GT also has a Sport mode, which livens things up considerably. Manual changes via the steering wheel paddles are slick and return a bit of fun to the cog-changing experience.

After years of satisfactory but hardly thrilling chassis, Peugeot has reinstated its once-fine reputation for handling finesse. The 508 GT has a unique double-wishbone suspension set-up that's really quite firm, engendering an almost Germanic confidence to the way it corners. The steering (unusually, a hydraulic system in an era when electric rules supreme) is also sharp and precise, if not quite boasting the same level of feedback as you get in a BMW.

The minor downside of such a firm suspension set-up is a harsh-ish ride over rough road surfaces, but on smoother roads the GT is a very comfortable car to drive — and it's certainly more compliant than hard-edged German rivals.

Quality brands must be scratching their heads these days about how to differentiate themselves from mainstream cars like the 508, which has an interior that matches German standards of fit and finish. The doors, for example, shut with a satisfying solidity, and the cabin materials are, for the most part, excellent.

For a saloon, the 508 is very spacious. With a boot volume of 515 litres, it can swallow a huge amount of luggage. Use the split/fold rear seat facility and you can boost that to an impressive 1,381 litres. And if that's still too small, Peugeot sells an SW estate version.

As for equipment, the GT has it all. The idea of a full-colour head-up display in a mainstream car would have been unthinkable only a few years ago. The GT's version works extremely well, projecting essential information such as speed and SatNav directions on to a tiny colour screen that sprouts up in front of the driver. The SatNav itself works very well, as does the standard dual-zone climate control.

Priced at over Ł29,000, the GT 200 isn't a particularly cheap model in the 508 range. Nor is it going to set the fires of passion alight. But it is well-made, dynamically accomplished, bursting with equipment and usefully practical. In short: an all-round box-ticker. — Chris Rees