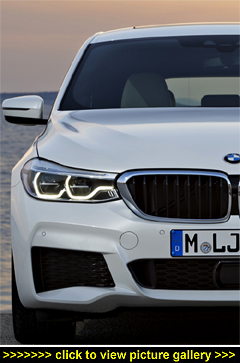 “BMW’s all-new 6 Series Gran
Turismo is about more than just
style, specification and space;
in addition to having all of the
above, it’s unashamedly a grand
sports tourer...”

THE FIVE-DOOR, LONG-WHEELBASE new 6 Series Gran Turismo replaces the 5 Series Gran Turismo which was first launched in 2009. This move to a new designation follows other shifts in BMW's model hierarchies which saw 1, 3 and 5 Series Coupes and Convertibles become 2, 4 and 6 Series versions.

Prices for the Gran Turismo start at Ł46,810 and rise through eight variants to Ł57,570, but as usual there's a host of extra-cost options to push the on-the-road prices seriously higher.

BMW's 4WD system (xDrive) can be ordered with the 640i and 630d M Sport specification cars and adds Ł2,000 to the price over rear-wheel drive models. Each engine is also available with SE or M Sport equipment; the added technology that comes with M Sport versions makes them Ł3,600 more expensive than SE models.

The new 6 Series Gran Turismo will appeal to those who want an alternatively-styled flagship model — essentially it's a Crossover combining the driving dynamics of a saloon and the elegance of a coupe roofline with the elevated driving position of a Sports Activity Vehicle and the convenience of an estate. All of which adds up to great touring ability with the emphasis on long distance comfort and convenience.

In the UK the most popular engine will be the 630d, with half of customers taking the xDrive option, and four out of five going for the M Sport spec meaning that the single best-selling version will be the Ł56K 630d xDrive M Sport, the main competitors for which are the Mercedes CLS and the Audi A7.

The new 6 Series Gran Turismo is underpinned by a version of the 7 Series Saloon platform that makes it 5,091mm long; and 87mm longer than the outgoing 5 Series GT it replaces. Despite that, and thanks to a combination of aluminium and high strength steel, the average weight reduction over the 5 Series GT of the new 6 Series GT is 115kg. Good news for fuel consumption which, depending on the model chosen, ranges from 35.3 to 55.3mpg, with CO2 emissions of 135 to 183g/km.

Much improved rear passenger legroom is another benefit, as is boot space — it's increased by 110 litres to 610 litres (and with the 40:20:40-split rear seats folded this goes up to 1,800 litres). The boot sill, incidentally, has also been lowered and is now flush with the boot floor for easier loading. The rear seatbacks can be lowered and raised electrically using switches in the load area.

Those travelling up front enjoy electric seats and raised seating positions; for the driver this ensures fine all-round visibility. Positioned centrally in the twin-cockpit design front cabin is a free-standing 10.25-inch display serving up touchscreen navigation, communication and infotainment.

Safety items include Collision and Pedestrian Warning with City Collision Mitigation while the list of options includes the new improved version of Active Cruise Control (operational at speeds all the way up to 130mph).

Lane Departure and Lane Change Warning systems that operate between 44-130mph are also options, as are Side Collision Warning and Evasion Aid, both of which will come to the driver's aid with corrective steering inputs.

There is an eye-catching coupe side profile and viewed from the front or rear the vehicle has an agreeably muscular stance. Above the waistline the A-pillars are much more heavily raked than before, while the flowing roofline and sweeping side window design further enhances the coupe look.

My brief outing at the UK media launch was in the best-selling 630d xDrive M Sport — it costs Ł56,605 but the vehicle was fitted with a host of options to showcase what extras are available, in the process rewriting its price-tag to Ł71,145. Even though all versions have rear axle air suspension, one of the options fitted was the Ł1,670 front and rear axle 'air' option — likely to be one of the most popular add-ons.

It's a big, wide, lane-filling car packed with equipment, interior luxury, long rear cabin legroom, and a huge boot. On first acquaintance, leaving the driving mode in its no-fuss Eco-Pro setting suited both me and the Gran Turismo best.

The Comfort setting was too soft, giving a 'floating' road-holding performance around the winding narrow roads and definitely too floaty for precise handling — but it will definitely be much used for long-distance, open-road travel.

The Sport mode sharpened the engine, transmission and handling responses but on rural roads and in busy traffic conditions (yes, even in the countryside!) its use is limited except again on more open A-roads.

In fact in rural driving conditions it was Eco-Pro that turned out to be the setting of choice for this high-speed cruiser, while a brief dash along a short motorway section proved this is the most appropriate domain for the new 6 GT although it would be nice to waft along in, especially during stop/start inner city driving, either as the driver or, more likely, the well-heeled passenger reclining in the rear.

The 630d's straight-six TwinPower turbodiesel is a strong performer across a wide range of driving conditions, from slow crawl to relaxed high speed cruising. With 261bhp and a massive 457lb ft of torque from 2,000rpm meted out through the eight-speed automatic sports transmission and all-wheel drive grip it has the ability to be smooth and refined — but can show its teeth without growling under hard acceleration. Top speed is limited to 155mph and zero to 62mph takes just six seconds.

Officially the Combined Cycle fuel economy figure is 49.5mpg but on my more sedate real-life run around the highways and byways of Berkshire, the figure was 40.2mpg. With CO2 emissions of 154g/km road tax is reasonable for a car of this class and size — the First Year rate is Ł500 and it then falls to Ł140 for year two onwards. However, added to that Ł140 figure each year for five years is a Ł310 supplementary charge incurred because the car costs more than Ł40k.

With a 6 Series line-up for now consisting of the Coupe, Grand Coupe and this new Gran Turismo (providing more space and long distance travelling refinement rather than outright sharp handling agility), BMW have this niche sector well and truly sewn up.

For most BMW owners, driving pleasure and image play a big part in the ownership proposition but space also matters, as does travelling comfort and driveability. With its huge size and kerb appeal, classy pedigree, luxurious interior, and high spec allied to a strong and responsive engine and comfortable and relaxing ride, the Gran Turismo is assuredly one for them. ~ David Miles