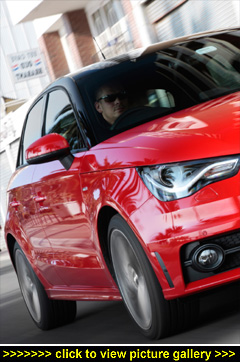 “7 out of 10 A1 3-door hatch owners
are new first-time buyers of the Audi
brand. Now the just-launched five-
door Sportback version is expected
to be even more popular, outselling
the three-door models by 2-to-1...”

TOGETHER, THE TWO BODY STYLES will account for around 20,000 of Audi's projected 124,000 UK sales this year — another all-time record (Audi sold a record 1.3 million cars world-wide in 2011, and that total was constrained by the number they could build and supply). Outside of Germany, the UK is the second largest market in the world for A1 sales.

Prices for the new Sportback range from Ł13,980 to Ł21,270 — that's just Ł560 more than the corresponding three-door A1 hatchback versions. Not bad value considering you're getting two extra doors for better convenience, plus the rear windows are electrically operated.

Sportback models have exactly the same overall dimensions as the three-door although the rear-quarter C-pillar has been redesigned and the roofline raised and extended at the rear to improve head and shoulder room for rear passengers.

As a result the Sportback version looks better balanced and more in keeping with how a proper 'scaled down' Audi should look.

Luggage space is unaffected and remains the same as for the three-door models: a 270-litre boot that converts to a 920-litre loadbay with the rear seatbacks folded.

Following this summer is a 141bhp 2.0-litre TDI unit with 236lb ft along with (and, perhaps, the star addition) a 138bhp 1.4-litre TFSI four-cylinder petrol unit that can run on either two or four cylinders depending on power demands. This dual-mode engine is said to offer the fuel-frugality, torque and low CO2 of a diesel but the response and refinement of a petrol engine.

Three trim and equipment levels are available: SE, Sport and S line. By far the most popular is Sport, with a 60% take-up, with the other two each accounting for 20%. Common to all trim levels is AirCon, electric front and rear windows and mirrors, split-fold rear seats, six-speaker radio/CD unit linked to a 6.5-inch retractable display screen, remote central locking, alloy wheels and a 'sports' look and layout to the fascia panel, dials and controls.

Only the best-selling Sport versions were available for my test drive; all fitted with the larger (optional) 17-inch alloys. However, ride quality and road noise intrusion is not so good with these big wheels and on UK roads the ride is really hard and unforgiving. Given the choice, I would stay away from anything larger than the SE's 15-inchers.

The provision of the two extra rear doors is where the Sportback really scores over the three-door because it makes the A1 so much easier to live with, not just for rear seat access but even if you mostly use the back seats for carrying bags or coats.

The three-door model's wide front doors can be inconvenient in tight car parks where they can impede easy exit and entry to the car. The Sportback's narrower doors are not so wide but can be opened more, considerably improving access.

The 120bhp 1.4 TFSI petrol engine comes with 147lb ft of responsive torque from just 1,500rpm and will make the most sense for most people, particularly given the now much higher cost of diesel over petrol. A third of all customers choose the optional (Ł1,450) S tronic automatic dual-clutch transmission, as fitted to my test Sportback.

Working together, the responsive engine and the seven-speed auto 'box deliver zero to 62mph in a lively 9 seconds and a maximum speed of 126mph. Just a shame then that the car's poise is spoilt by the very firm ride.

Not only does this pairing produce a lively combination, but it's also efficient: 122g/km of tailpipe emissions versus the 126g/km for the same engine mated with the six-speed manual 'box.

Officially, this 1.4 petrol engine-S tronic set-up returns 53.3mpg — my 'Cotswold cruise' returned 37.8mpg. As a result of the latest Budget changes (effective from 1 April, if that's not a Governmental joke), there's no road tax to pay for this version in the first year, and only Ł100 per annum thereafter.

Diesel fans have not been overlooked — for them the 103bhp 1.6-litre TDI unit with a five-speed manual 'box will be their workhorse model. In Sport trim it costs Ł16,880 and offers 147lb ft of torque, also from 1,500rpm, with capable rather than lively performance: 118mph and a tardy-feeling 10.7 seconds to get to 62mph.

Its tall top gear also meant lots of changing down for overtaking. Officially its should do 74.3mpg; my leisurely test drive returned 55.3mpg.

Where this TDI unit wins is with its low 99g/km of CO2, which places it in the lowest road tax band — so no road tax at all in the first year; and none to pay in the following years either.

Reasons to buy the new A1 Sportback include the classy brand appeal, it's roomier than the 3-door, better balanced and better looking. If you opt for the 17-inch wheels and Sport suspension, expect a very firm ride and unsettled handling.

Overall, there's no question that in its new five-door Sportback guise the A1 is not only more user-friendly but a nicer looking car than the three-door.

It offers a good choice of power units, and there are more to come. Audi say customers like the Sport specification and take the larger wheel options but I just wish they would offer this car with a bit more finesse in the ride comfort department — not only would buyers save money by going for the SE spec with standard-sized wheels, they'd feel more comfortable as well! — David Miles