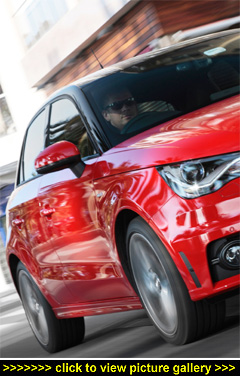 “Fancy a five-door premium super-
mini? Then you have just one
choice — Audi’s new A1 Sportback.
And before you quibble, you really
can’t count the much bigger MINI
Countryman as a supermini’...”

SO WHAT IS THE SPORTBACK? It's the five-door hatch version of the previously three-door-only A1 that's been available since 2010. Does it look better than the three-door? There's not that much in it, but one way you can make it stand out is to order the full roof paint finish in a contrasting colour — something that's exclusive to the Sportback.

You can choose from three roof colours — not just the roof 'bars' as on the three-door, but the complete roof. The Sportback also gets a unique paint option called Samoa Orange, very much an 'on-trend' thing (or so my missus says!).

The Sportback is not an extended-length model. In fact, it's virtually the same size as the existing three-door: just six millimetres taller and six millimetres wider. Audi claimed at the press launch that it's the brand's smallest-ever five-door hatchback, but they forgot about the A2, made between 1999 and 2005, which was substantially shorter and narrower. That aside, the A1 is genuinely supermini sized.

There's very slightly more headroom (11mm) and shoulder room (13mm) in the Sportback over the three-door, but it's hardly noticeable. Frankly, anyone taller than about 5ft 8in (1.74m) will still find things pretty cramped in the rear. Getting into the back is, obviously, much easier than in the three-door A1. And rear passengers get electric windows, which in the three-door they don't.

Perhaps the most significant advantage of the Sportback is that you can fit an extra passenger in the back: the three-sitting-abreast layout is standard on all UK Sportbacks with all three rear passengers getting a proper headrest and a full three-point seatbelt.

The boot is no bigger than that of the three-door model — 270 litres or 920 with the rear seats folded. An optional luggage package (Ł95) features divided storage compartments under the boot floor, plus a 12V socket and various hooks and nets.

Three TFSI petrol engines are offered in the A1 Sportback from launch. For the record, I reckon the entry-level 1.2 TFSI is the pick of the bunch: it may only have 85bhp but it's a very sweet, free-revving unit — and also happens to be the cheapest model. If you want extra pace, Audi offers a 1.4 TFSI unit with either 120bhp or a twin-turbo version with 182bhp.

However, the subject of this test is the 1.6 TDI diesel, a powerplant that has 103bhp combined with a very healthy 184lb ft of torque. Audi claims the 1.6 TDI can average a remarkable 74.3mpg, helped out by the standard fitment start/stop. The 99g/km CO2 output for this engine should give it strong appeal for company car drivers, as its tax is in an ultra-low class.

Figures aside, the 1.6 diesel isn't, frankly, the most convincing engine in the VW Group's line-up. Audi claims the 0-62mph time is 10.7 seconds, which isn't bad, but it certainly doesn't feel particularly lively. Peak power arrives quite high up the rev-band for a diesel — at 4,400rpm — but I wouldn't recommend spending much time in this zone because the engine note becomes quite raucous. Better stick to just above tickover, where all the torque is, and change up gear early: it won't affect your speed much, and you'll have a far more pleasant journey.

The 1.6 TDI engine is linked to a manual 'box which, perhaps surprisingly, has only five speeds (most cars are six-speeders these days, particularly ones with prestige badges on the front grille). Luckily, the gearbox is fast-acting, precise and fairly smooth.

If the 1.6 TDI engine underwhelms, the answer might be the larger 2.0 TDI diesel, which arrives in May 2012. And its performance figures look much more promising: 141bhp and 236lb ft of torque. The 2.0 unit will get the A1 Sportback to 62mph from rest in 8.5 seconds and should, according to official figures, average 68.9mpg.

In SE spec, the A1 comes with 15-inch alloy wheels and 205/55 rubber. What this means in practice is that you have a far better ride quality than the higher-spec Sport and S-line models, which have 16-inch and 17-inch alloys respectively, and 'sports' suspension that firms up the ride considerably.

Like so many modern cars, there's no spare wheel, not even a space-saver; just a tyre repair kit. However, if you don't fancy the rather hard ride the sports suspension engenders, you can tick the box for the no-cost Dynamic suspension option which gives you back all the lost ride quality.

As for handling, like the three-door, the A1 Sportback benefits from near-50:50 front:rear weight distribution. The suspension is relatively sophisticated with front MacPherson struts and a rear torsion beam similar to the VW Polo (the A1 has a lot of Polo underpinnings). Electronic stability control with an electronic axle differential is also standard. It's all very safe, predictable and competent, but is it fun? Not by MINI standards it isn't; the steering and turn-in sharpness aren't in the same league.

However, you do get decent kit. Standard features, even on the base SE, include alloy wheels, remote central locking, split/fold rear seats, electric windows front and rear, air conditioning and a CD/MP3 audio system with a 6.5-inch retractable display.

The A1 Sportback is priced relatively competitively; from Ł13,980 to Ł21,270 (that's a premium of Ł560 over the three-door A1). Despite the extra cost, Audi expects to sell twice as many Sportbacks as three-door models. And most of those will be Sport versions. My advice is to buy a 1.2 Sport and tick the Dynamic suspension option box, and go for the Ł250 five-year service plan. You'll then have a fun, frugal, comfortable quality car that really does feel like a miniature Audi A3. — Chris Rees