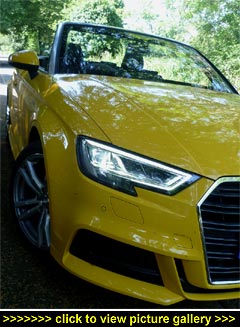 “Everyone loves the idea of wind-
in-the-hair motoring but most would
also like to share the experience
with their friends. And for that you’ll
need a cabriolet with four seats —
Audi’s spiffingly good looking A3 can
do that and is perfectly cut out to
deliver all your topless thrills...”

THEY SAY A PICTURE is worth a thousand words. They're right. When you view our A3 Cabriolet gallery you'll see that, looks-wise, Audi's latest cabriolet is a winner from the very first glance. Smartly 'sculpted', it is 24-carat eye-candy top-up as well as top-down — even more so when wearing the can't-miss-me yellow livery of our test car.

Our Cabriolet was also badged in conformity with Audi's new power nomenclature: '35 TFSI' — Audi-speak for the German brand's 148bhp 1.5-litre petrol engine. And a very joyful powerplant it is too, being eager to please right from the off thanks to peak torque (a muscular 184lb ft) being on tap from just 1,500rpm; pulling smoothly and eagerly from low-down, it stays focused even at three times those revs. Yet for all that, it's agreeably refined; you'll rarely hear it which is good news when the top is down.

An unexpected technical bonus is the engine's cylinder deactivation system — when cruising and under light loads this boosts efficiency by temporarily switching off two of the four cylinders. We didn't trigger it that much due to the amount of quick A- and B-road miles we covered, but our week's hard driving still logged an impressive 41.4mpg. We couldn't imagine any owner quibbling with that; many may better it; with an official 'touring' figure of 54mpg, the potential is out there.

Making the 35's progress as cool as possible is Audi's S tronic dual-clutch autobox that wafts swiftly through its seven ratios to deliver 62mph from standstill in 8.9 seconds and a top speed of 138mph; fast enough for a carefree cruiser but if you want truly scorching off-the-blocks acceleration then look to the S3 for your soulmate. For the record, if you prefer doing your own gear-changing the default six-speed manual 'box is a slick operator and absolutely no hardship.

Our A3 came in the obliging Sport spec although our test model was rolling on eighteen-inchers shod with 225/40 Dunlop rubber that, despite the sporty lo-pro sidewalls, don't betray the engineered-in comfort levels even when cantering over iffy tarmac. Sport models come with 'Dynamic' suspension which combines a supple ride with minimally-intrusive bump absorption. This set-up really does make the Cabriolet as much at home hot-footing it down twisty B-roads as it is pootling around the houses. But if ride quality is paramount then by all means tick the box for the Adaptive Magnetic Ride dampers that are standard-fit on the range-topping S3.

While drop-tops live and breathe to swan around topless that's not to say you won't want to have some driving fun — feel free, because the A3 Cabriolet will be happy to indulge you. This Audi convertible is assuredly not just for boulevardiers; to help those pilotes keen to press on there's steering that keeps you well informed as to what's going on at the 'contact patch' where the Dunlops bite the blacktop and direction changes are performed keenly. Added to that, well managed body roll and more than enough grip ensure the twisties can be taken with confidence. Worth mentioning, too, is that the accepted downside of convertibles — scuttle shake — is noticeable only by its absence.

Doubling-up your driving pleasure is Audi's Drive Select that offers you a range of driving styles for every mood or occasion: Auto, Dynamic, Comfort, Efficiency, and Individual. The settings are discernibly different and you really would be missing out if you didn't make full use of Dynamic for those spirited bursts and Comfort when you're just chilling. Adding to the fun are gearshift paddles mounted on the wheel's horizontal spokes for whenever you want to take total control of the autobox's shift points to wring out the performance.

Peerless: a fitting word to describe the Cabriolet's cabin — the aluminium elements are a delight, and all beautifully fitted. Whereas the real metal switchgear, gorgeous knurled air-vents and soft-touch surfaces tempt you to touch, the 'Rallye' sports-style front seats encourage you to sit. Their highly-tactile cloth centre panels feel great and the chunky bolstering will keep you firmly in-situ during bouts of feisty driving. The front cushion sections extend for superior under-knee support and there's loads of stretch room for your legs and good shoulder room along with a fist of headroom roof-up.

The pleasure doesn't stop there — a three-spoke, flat-bottomed, comprehensively multi-function wheel with a satin-black perforated-leather-wrapped rim fronts a perfect driving position. The height-adjustable seats may have manual adjusters but they're slick to use and offer so much adjustment that we can't image anybody not getting comfortable in seconds. Visibility is first-rate thanks to slim windscreen pillars and good-sized side windows. Seeing what's behind you is not a problem even with the hood up and the heated rear screen won't cramp your parking manoeuvres (naturally there are sensors and a reversing camera with an active guideline grid to make life easier).

The cherry on the cake of the cabin's stylishness is Audi's Virtual Cockpit — a 12.3-inch LCD instrument cluster that lets the driver customise the display by, for instance, shrinking the size of the dials so a large central chunk of the panel is freed up to show the mapping. And you can switch between views on the go with a quick press of the relevant button on the wheel. As you'd rightly expect, there's a digital speed read-out along with the selected driving mode and the active gear. It all works flawlessly and is significantly less distracting than having to glance at a dash-centred screen when navigating, especially in traffic — every car should have one!

That said, the A3's fashionably slim seven-inch screen, which rises out of the dash-top whenever you fire-up the engine (you can retract it at any time), sits high enough on the fascia to be taken in with even the quickest sideward flick of your eyes. Like everything else in the cockpit, it's so easy to use. Ditto the Multi Media Interface (MMI) through which you control many of the A3's major functions via a rotary dial and toggle-switches clustered logically on the centre console immediately behind the S tronic lever. If you prefer squiggles to finger-taps, the top of the MMI rotary controller can be used for fingertip alphanumeric input.

Naturally Apple CarPlay and Android Auto are on hand for seamless smartphone connectivity plus there are 2 x SDXC card slots, 2 x USB ports, and an Aux-in socket along with Bluetooth plus a CD/DVD player with DAB digital radio; the standard-fit HiFi is perfectly fine (and comes with speed-dependent volume control) although audiophiles who demand as 'good as it gets' can upgrade to a 13-speaker Bang & Olufsen sound system. More good news: the infotainment system is also handsfree and always ready to respond to your spoken commands.

In its 'natural' state — soft-top power-folded away out of sight under the sleek rear deck — those in the front of the A3 Cabriolet are well protected from buffeting even if they don't have the mesh windblocker in place, plus there's extra cosseting from the 'air-scarf' neck warming system built into the top of the backrest. Opening up the cabin to bask in the sunshine (or, even more satisfying, on a starry, starry night) takes just 18 seconds to go from snug-as-a-bug closed to brazenly topless and can be done at speeds of up to 31mph — brilliant for foiling sudden showers without having to pull over.

Roof closed, the Cabriolet's cabin is as well isolated from the weather and noise as any steel-helmeted rival — the Sport version gets a sound-absorbent 'acoustic' roof that really does keep the cabin hushed. And while the windblocker temporarily restricts the Cabrio to two-seater mode due to its 'base' section sitting horizontally across the rear seating area, there's no loss of visibility in leaving it up with the roof closed. Another 'plus': if you're carrying items on the rear seats they'll be well shielded from nosy parkers. Other well-considered touches include a single button to open or close all four windows simultaneously and, of course, all windows have individual one-shot up/down operation.

In-cabin storage is also well addressed with an illuminated lockable glovebox, storage areas ahead of the selector lever (with a 'bed' for WiFi smartphone charging) and under the height-adjustable armrest between the front seats, a pair of large dual-use cupholders (and three more in the rear cabin), real-world door bins capable of holding a large bottle of water, and a handy storage box under the driver's seat that's home to a first aid kit.

Before dishing out invites to ride-along you should know that four full-sized adults, while doable, could be a bit of a squeeze; that said, slim grown-ups and teenagers will definitely enjoy topless showboating in the two individual back seats.

Top-up it's still a sought-after spot, especially if the coveted front passenger seat has already been 'bagged'. Even with the roof closed, reaching the rear seats is smooth sailing thanks to the easy-folding front seatback mechanisms that not only work smoothly but unfailingly return to their original position, so stopping to take on back seat passengers doesn't infuriate those already riding up front. Once there they enjoy individual seats with outer armrests, dedicated AirCon air-vents and comfy headrests. And wherever anybody sits, their side window will be made of heat-insulating glass.

Travelling with the fabric roof up leaves room in the boot for an unexpected — and almost hatchback-equalling — 320 litres of luggage; more than enough for a serious family shop or several hunky suitcases! Additionally, the 50:50-split rear seatbacks fold completely flat (simply pull the remote levers in the boot) allowing quite long flat-pack-type loads to be easily carried. Press the button to retract the roof and it powerfolds into its own dedicated in-boot well that, while temporarily reducing cargo space, still maks available a usefully shallow load bay.

Classy-looking and ego-enhancing, the A3 drop-top is a premium product both inside and out. Indulgently spacious for two adults (and with room for friends), it's also good to drive courtesy of a keen 1.5-litre petrol powerplant. A serious contender for your al fresco budget.~ MotorBar