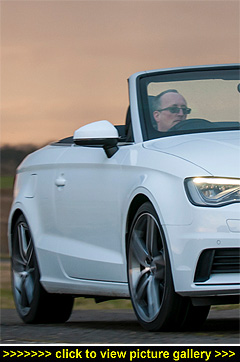 “If you want a soft-top, it should be
soft. You can see why: it looks like
a proper convertible; you don’t have
any of the packaging worries of a
three-part foldable metal roof — and
there’s an undeniable plushness
about it...”

OF ITS TYPE, Audi's fabric roof is indisputably a good 'un. You can open it at speeds up to 31mph, which is a definite benefit in those snap showers we now seem to get at any time of the year. The operation takes 18 seconds — okay, not class-leading, but better than the 20 seconds which is typical on most convertibles.

The last generation A3 Cabrio (2008-2013) sold 60,900 examples worldwide, which makes it an exclusive animal. This new one will undoubtedly retain that cachet. And the new Cabriolet has more boot space than the old one — 320 litres (or 678 with the rear seats folded). That's a very civilised amount of room for a convertible although, as ever with this kind of car, access to the boot is a real problem through a tiny aperture.

It's based on the short-wheelbase floorpan of the A3 three-door hatch, but its body is clearly derived from the A3 saloon. The design is sleek and sober, and Audi has kept airflow over that shape very slippery (a Cd drag figure of 0.30 puts it near the top of its class). The Cabrio weighs-in at 1,440kg, which is not bad for a car with so many electric motors in it.

The 2.0 TDI engine is the one to have in the A3 — and the one that will indeed be the most popular, with more than one third of buyers opting for it. Forget the 1.6 TDI which is too unrefined for a car of this quality. However, I wouldn't blame you if you went for one of the excellent TFSI petrol engines — the 1.4 making the most sense (1.8 and S3 versions are also available).

In 2.0 TDI guise, the A3 Cabriolet is superb to drive. There's loads of power and torque right across the rev band, and it's all very refined. Audi claims 67.3mpg for this engine; in practice something hovering around 50mpg is more realistic, but that's still decent for a car of this power (148bhp).

The only downside I can see is that there's almost too much torque — in wet conditions you can find the front end scrabbling around a bit, particularly when emerging from T-junctions.

The standard six-speed manual is superb, too: slick and positive. And so much better than Audi's seven-speed S tronic automatic unit (only available on petrol A3s at present), which can occasionally be flummoxed if you try and change gear manually via the paddle-shift system.

But it's the chassis that really makes the current A3 feel so special. The VW Group's MQB platform is a fantastic piece of work, offering the best combination of handling and ride anywhere this side of a luxury car. The fluidity and balance is a marvel: the car feels utterly planted on the road, encouraging you to press on through corners, which it deals with fantastically well. And while the electric steering system may not please purists, Audi is proving it's possible to approach hydraulic set-ups in terms of positive feel.

The A3's suspension can sometimes be on the firm side, but in my experience most passengers prefer this to that sense of 'wallow' you get in softly sprung cars. And you never feel uncomfortable in the A3 at all. That was on Sport-spec 17-inch alloys. That said, the ride might be more jiggly if you opt for the S line 18-inchers.

If ride is particularly important to you, the standard Sport suspension can be changed (at no cost) to a comfort spec. And in any case there's a drive select adaptive system, so you can flip between Comfort and Sport settings.

Also available is a 296bhp 2.0 TFSI S3 Cabriolet, which should be a mighty fine beast, if my drive of the S3 saloon is anything to go by. With four-wheel drive, it's also a perfect winter car as well as a summer blast.

Priced from Ł25,790, the A3 may not be the cheapest convertible on the market — and its retained value figure of 40% after three years and 60,000 miles is respectable rather than spectacular — but then you do pay for quality; and the Audi has plenty of that.

The new Audi A3 Cabriolet really has got it all: svelte looks, high quality, decent practicality, a peerless roof and probably the best chassis in the class. — Chris Rees