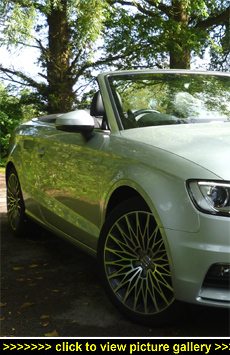 “Entertaining to drive. Premium
quality. Refined character. Stylish
looks. Add to these ‘plusses’ the
fact that there are four chromed
interlinked rings gracing its black
grille and an elegant soft-top
that will easily cover up four adults
and you’re talking about one
extremely desirable cabriolet...”

BUT IT'S NOT JUST the overall package that makes Audi's latest A3 Cabriolet so good because so too is the price — Ł26K will be more than enough to put one of these Germanic beauties on your drive.

Looks-wise it's a head-turner; obviously more so when topless. Thankfully, unlike many carmakers, Audi have eschewed folding metal tops and instead chosen to stay faithful to the traditional 'soft' convertible roof.

And, as you'd expect from a prestige brand like Audi, their soft-tops are totally weatherproof and keep the interior of their convertibles as cosy and impressively quiet as any metal-topped cabriolet. Better still, Sport and S line versions come with an acoustic hood fitted as standard.

While clearly bred in the Audi roadster stable, the A3 Cabriolet sits on the VW Group's 'MQB' platform — this modular architecture 'base' will eventually be rolled out to every transverse-engined Audi, VW, Skoda and SEAT.

Why? Because this chassis 'building kit' can be easily customised to suit a whole range of bodystyles from superminis, family saloons and estates, sports cars and convertibles, as well as SUVs and 4x4s. Designed to keep production costs down, more importantly it allows 'best for the job' parts to be used for each specific model.

However, as an end-user all you really need to know about MQB is that it's helped make this latest A3 Cabriolet an agile handler. And you don't have to travel very far to discover how 'planted' it feels on the road. Our Sport model had the stiffer sports suspension which edges the handling/ride balance encouragingly towards handling while still serving up an impressive ride quality — even when rolling on the optional 225/40 18-inch multi-spoke alloys as fitted to our test car. Even some seriously degraded stretches of Britain's blacktop failed to faze it.

Should you want 'smarter' damping you can tick the options box for a set of magnetic ride dampers. But before you do that, be aware that Sport-spec Cabriolet models also come with Audi's Drive Select which lets you switch between sporty Dynamic and Comfort settings on the fly (additionally there are three more to choose from: Auto; driver-personalised Individual; and Efficiency).

Overall, the Cabriolet's dynamic balance is well judged with barely a hint of body roll and quick and communicative steering (electromechanical with speed dependent power assistance) that eggs you on to press harder through the twisties.

Best of all, in its most appealing state — top down! — the Cabriolet's rigid undercarriage means none of the scuttle shake usually part and parcel of the convertible breed. Commendably, even driving over rough roads in the A3 Cabriolet we didn't experience any rattle 'n' shake whatsoever.

Fleet of foot and with a torquey in-line four-pot turboed 2.0-litre turbodiesel powerplant under its aluminium bonnet, the A3 Cabriolet offers an impressive turn of speed: 62mph comes up in 8.9 seconds and, given the right road, it will run all the way to 139mph.

Two versions of the 2.0-litre TDI are available: 147 and 181bhp. The 147bhp unit is an excellent choice if you like to blend your performance with economy — its official combined cycle consumption figure is 67.3mpg.

Our real-life average came out at a wholesome 54.1mpg despite being caught up in quite a bit of cluttered town traffic, a frustrating 12-mile stop-start farce that lasted several hours on the M25, and MotorBar's Maggie giving it some 'wellie' [Actually, knowing Maggie, much more than just 'some' — Ed].

Also pleasing is the fact that, for a diesel, the 2.0 TDI is surprisingly muted. In fact, even when the roof is down, you barely notice any mechanical sounds at all from this refined and happy-to-rev unit.

Of course, with 250lb ft of torque on call between 1,750 and 3,000 revs there's plenty of smoothly-delivered punch throughout the rev range; cruising motorways in 6th gear pickup is instant, even from 70mph. The standard six-speed manual 'box is packed with a very usable set of ratios and, you'll be glad to hear, it's a lovely thing to use with slick, positive changes a given.

This latest generation Cabriolet is slightly longer and wider than its predecessor and cabin space is further improved by the extra 180mm in its wheelbase. Its beautifully arranged cabin is built to the usual Audi standards — in other words, it's absolutely first class wherever you look. The nicely-bolstered bucket-style seats are upholstered in tactile suede-like Alcantara and black leather and are as comfortable and supportive as they look. The driver benefits further with an extending under-knee support.

Like any Audi, the Cabrio feels reassuringly 'premium' and packed with quality kit — the MMI screen rises up out of the fascia-top whenever needed and a DAB radio and iPod connector are also provided. The instrument pack features two crystal clear analogue dials separated by the on-board computer display showing all the usual trip data including a digital speedo readout.

All of the controls and switchgear have lovely satin chrome filleting and work with a polished precision that adds immeasurably to the pleasure of ownership. No surprise why Audi drivers stay loyal to the brand.

The fascia is refreshingly uncluttered and the jewel in the crown is the air vents that are miniature works of art — their knurled outer aluminium bezels turn to regulate the air flow; the direction is controlled by swivelling the inner hi-gloss black 'eyeball'; and best of all is the clever push/pull central ring to change from a powerful, focused jet of air to a softer spread-out delivery.

The thick, smooth leather rim of the multifunction steering wheel is very good to hold and use while remote controls for just about everything including the phone and media let you keep your hands where they belong.

You still have to use your left hand to change gear, of course, and your left forefinger to operate the electric parking brake sited alongside the power hood button behind the MMI control console (all utterly foolproof to operate), itself immediately behind the short gearlever.

All four windows are one-shot items; plus there's also a 'musketeer' switch (all for one and one for all) that raises/lowers all four windows together with a single push.

Storage-wise there's a large lined glovebox within which is housed a 6xCD autochanger and a pair of SD card slots — even so, there's still ample room for your 'stuff'. Two large cupholders can double up as open bins ahead of the gearlever; door pockets are real-world usable; plus there's more storage space under the centre front armrest and a handy net pocket on the centre tunnel in the front passenger footwell. And there's more — moving the first-aid kit from the storage box under the front passenger seat to the boot frees up a handy out-of-sight cubby.

The fabric roof comes in two grades and the superior, extra sound-absorbent 'acoustic' 'rag-top' is standard on Sport versions. Whichever, press the button near the gearlever and 18 seconds later you'll be unashamedly topless with the four side windows raised to keep out any draughts. Which they do very thoroughly indeed.

Given our oh-so-changeable weather, it's good to know that you can raise the top again on the move at speeds of up to 31mph. When not required the roof folds itself near-silently away into a 'box' in the boot to leave the Cabriolet's attractively long shoulders and rear deck minimalistically 'clean'.

Open-to-the-skies driving in the A3 Cabriolet is a refined and tranquil experience. And keeping it all snug even on crisp winter days (amazingly, next to a moonless night, the most exhilarating time to get your top down!) is dual-zone climate control that throws out very hot and very icy air. Lovely! For maximum protection from buffeting the right move is to spend Ł300 for the optional fitted-in-seconds mesh wind deflector. Included in the Ł300 package are cruise control, an auto-dimming rearview mirror, and a rear parking system.

With the roof raised there's decent headroom beneath the smart and well-fitted roof lining. There's also plenty of space in all other directions with well spaced pedals and a left-foot rest that's angled just right for cruising comfort. The driving position is spot-on and visibility fine even with the top up — even rearwards through the 'letterbox' glass rear screen.

The Cabriolet's rear accommodation consists of a pair of individual seats that match the fronts and which are separated by a triple cupholder strip. They're suitable for grown-ups with feet (there's plenty of room under the front seats) and even with the roof overhead there's ample air above your scalp. Getting in and out is easy enough even with the top up thanks to front seats that slide a long way forward for access.

A neat touch is the retaining strap on each front seat's outer shoulder to keep the seatbelts tidy and conveniently to hand for those up front — the pop-stud fixing makes the belt straps easy to release when tilting and sliding a seat forward for access to the rear seats.

Hood raised, the A3 Cabriolet has as much boot space as some mainstream family-oriented hatchbacks — 320 litres with the top's variable storage box pushed up out of the way when the roof is raised. Drop the 50:50 split rear seatbacks (they fold down perfectly flat) and this expands to 678 litres loaded to below the wind deflector that sits atop the rear passenger compartment.

All of which makes the A3 a very practical cabriolet for two adults touring with more than a bootful of cases or even holidaying with two youngsters travelling in the back. Naturally bag hooks and a luggage net with pockets and sturdy tie-down hooks are all present and correct in the boot.

This new head-turning A3 Cabriolet has got the lot: a fab cabin, a first-rate driving experience, and unexpectedly good fuel economy. And fair to say, it's one of the best convertibles on sale today. — MotorBar