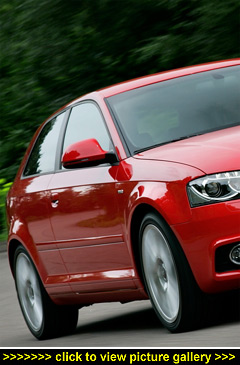 “Less or no road tax, no Congestion
Charges and low Benefit-in-Kind
taxation for company car drivers
are the targets for many real-life
motorists in cut-back Britain today.
And Audi have just the thing for
greener and less costly motoring —
the new, tax-friendly A3 1.6 TDI...”

WITH 56% PER CENT OF NEW CAR SALES in the UK, for the first six months of this year, going to Fleet and Business users, the current economic and perhaps environmentally-aware climate means we are indeed reducing our motoring costs.

Aptly demonstrated by the new A3 TDI Start-Stop family sector (Golf/Focus in size) turbodiesel hatchback — this model really hits the target for delivering a reduction in running costs and, of course, it comes from the premium Audi stable.

The official on-the-road price is Ł18,315, but be prepared to spend more if you delve into the options list. In standard specification it has Start-Stop, a fuel-saving long fifth gear and low-rolling resistance tyres plus the usual items such as manual air conditioning, electrically-operated front windows, power-operated door mirrors, remote central door locking, on-board computer, good sound system, 15-inch alloy wheels and underbody airstreaming mods along with a slightly lowered suspension.

But apart from owning or running an Audi, the main interest for this model will be the actual running costs: nothing, nil, zilch for road tax because of the 99g/km CO2 emissions.

As for fuel economy, then officially 74.3mpg and actually 64.7mpg on the test drive in all conditions and not in fuel-saving mode from the driver. Note that the 74.3mpg figure is for the combined cycle. And as for company car drivers, they will only be hijacked with a 13% BIK tax liability. And that's not all — London residents, commuters or those who visit the Capital will pay no Congestion Charge (at least, under the current rules).

This Audi is just one of a number of fuel-efficient diesel and petrol-powered models that show Hybrids are not the only and long-term solution to lower emission motoring and in truth provide more acceptable driving performance and without the need for expensive batteries and an electric motor.

The A3 1.6 TDI has a top speed of 121mph and takes 11.4 seconds for the 0-62mph dash. Now these figures are not stunning but, importantly, neither are they a drawback during driving. There is no issue in keeping up with other traffic on fast motorways and A-roads, and despite the long fifth gear the engine is responsive and acceleration pretty good.

I actually covered several long journeys and short trips with this fuel-miser — just real-life motoring and there were no real drawbacks in its performance.

The excellent 64.7mpg was not achieved by sympathetic driving because, like most company car drivers, I was in a hurry all week and so the A3 had to work for its living. That figure impressed me because I know, driven in a different manner, it would be better still. The Start-Stop system worked so well I forgot it was a feature because it immediately fired-up the Audi when I wanted to move off in stop-start traffic.

Handling was as good as any A3, and the ride more comfortable than some sporting versions.

The A3 fuel-miser is available only in three-door guise which will rule it out for some people but if company car drivers need to downsize and there's only themselves and one other in the car it works financially as well as practically. It is not the most eye-catching of Audi models and seemed almost devoid of the usual 'bling' trim, giving it a somewhat bland look. The light 'Glass Blue' exterior paint finish didn't help and the interior, although well laid out, wasn't particularly uplifting in its choice of materials.

However the plus points more than compensate: first and foremost, it provides a real-life way to reduce motoring bills without any real loss in performance. Then there's the desirable premium brand image, the high quality, it's well made and it has excellent residual values.

All that aside, it was an Audi and it saved me lots of money on fuel and if I was the owner then road tax is free and if it was my company car, then the family budget in these harsh economic times would be noticeably better off. — David Miles