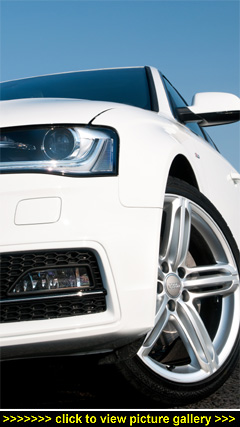 “Audi’s current A4 model is now four
years old. And as any parent knows,
at four years your child’s appearance
really starts to change — and so it is
with the 2012 A4...”

YOU'LL SPOT THE FACELIFTED A4 range by its new-look grille, fresh front bumper, angled air inlets and different-shape fog lights. The headlights are also new, and Audi's signature array of LED daytime running lights shows off a different wraparound shape (as do the LEDs in the rear lights). The bonnet and rear bumper have also been reprofiled.

Audi's superb interior has fewer changes to report: just a new steering wheel (with, in Sports versions, a flat lower edge), new chrome trim, and simplified controls for things like the SatNav and climate control. New colours, materials and inlays also feature — and the A4 remains a fabulous place to sit. Build quality is as impressive as ever.

But enough of the stylistic flim-flam — the really significant stuff is happening under the bonnet. For most A4 buyers, the big news is the arrival of some super-efficient TDIe diesel engines.

Even more impressive is the fact that the current entry-level A4 is actually better-performing than the 2008 model, despite its lower power output. In fact, having driven the 136PS TDIe, I think very few drivers will feel short-changed by the performance.

The 0-62mph sprint takes a swift(ish) 9.3 seconds. The 0-62 figure is almost entirely academic, I know, but it nevertheless offers a good insight into the healthy overtaking ability of this engine. It's very flexible from very low revs, and there's only the mildest hint of turbo lag. The TDIe engine's new dual-mass flywheel keeps it very smooth low down the rev range, encouraging you to change up gear very early (which, of course, also benefits fuel economy).

Speaking of gearchanging, the standard six-speed manual works superbly well. In fact, I much prefer the slick and positive manual to either of Audi's automatic choices. I find the continuously variable Multitronic 'box is over-sensitive and revs the engine uncomfortably highly — it very quickly becomes a chore to use. The seven-speed S tronic system is much better: it's sportier and fast-shifting but its manual override paddle-shift system is all too easily flummoxed.

As well as the 136PS TDIe engine, there is a second TDIe-badged A4 — a new 160bhp (163PS) version. This has sharper acceleration, yet it boasts a CO2 figure of just 115g/km. For anyone paying company car tax, that's a crucial part of the car buying decision. Both the new TDIe models are front-wheel drive (quattro four-wheel drive is available on higher-power engines only).

The A4's suspension has always been on the firm side, and despite new rear suspension control arm mounts and revised damping, that hasn't changed with the latest facelift.

Owners who opt for the S Line package will feel it most, as the chunky alloys and low- profile 'rubber band' tyres really do leave you feeling every princess-and-the-pea bump.

But here's some good news: if you specify the TDIe engine, Audi won't actually let you have it with S Line trim (you'll need to order one of the more powerful engines for that).

And while that might seem a disadvantage at first, it's not. You end up with a much better ride quality because of the smaller-diameter alloy wheels shod with higher-profile rubber. Okay, they might not look as cool as those arch-filling S Line alloys, but your backside will thank you every time you venture out.

More good news: the A4 handles in the same assured way it always did. Electromechanical steering is now fitted to all models in the range, a move that's targeted at reducing fuel consumption more than gaining feel. Of its type, the steering is very good, but in my view no-one has yet mastered the art of making electric steering as feelsome as hydraulic systems.

So the A4 has grown up a little bit more, and it's now one of the most fuel-efficient and tax-efficient executive saloons on the market. Yet more verification that Audi's roll looks like continuing for some time yet. — Chris Rees