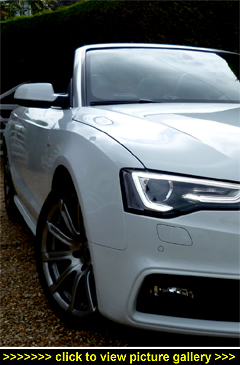 “Audi’s range-topping 328bhp A5
Cabrio, the S5, costs close to Ł50K
but drivers with a yen for going
topless and spending Ł37K on the
187bhp 2.0 TDI version won’t be
left feeling short-changed...”

LOPPING OFF THE A5 COUPE'S METAL HEAD and substituting a premium quality powered fabric soft-top makes for a brilliant Cinderella-going-to-the-ball transformation of Audi's Coupe.

The A5 Cabriolet is a real eye-magnet, attracting covetous glances from both foot traffic as well as other drivers. Top up or top down, it's one of Audi's sleekest convertibles and its clean lines and symmetry edge out its prestige rivals in the Cabrio stakes.

A5 Cabriolet engine sizes — if you don't suffer from the traditional male 'mine's bigger than yours' syndrome — start with an everyman's 1.8-litre (174bhp petrol) and extend up to three litres with 241bhp. What they all have in common is a great 'get out of jail free' card in the form of a powered roof than can be retracted very quickly at the touch of a button and, crucially in our unpredictable UK climate, at speeds of up to 31mph.

We had to put this to the test when monsoon-like rain brought traffic to a standstill with foot-deep water and fountains gushing several feet into the air from the manhole covers in Canterbury during our test — thankfully a few huge warning drops that hit like paintball shots gave us time to raise the roof while moving in a stream of 25mph traffic along a narrow road with no room to pull over.

Seventeen seconds later the Cabrio's triple-layer and watertight fabric top was latched and locked and we were snug and sheltered.

Back to that other folding stuff — Ł37,260 will buy you one of the 187bhp (190PS) 2.0 TDI models in classy S line spec that we've thoroughly enjoyed driving this past week. For many it serves up the perfect real-world blend of pace and economy with premium convertible looks.

Even with significantly less than the S5's 328bhp, the 187bhp 2.0 TDI still manages a top speed of 145mph; zero to 62mph acceleration takes a perfectly fine 8.2 seconds. Officially it returns 55.4mpg in the Combined Cycle running on 18-inch wheels, and our hard-driven test average came out at a commendable 47.9mpg. Going for the bigger wheels pushes up the CO2 emissions very slightly, from 125 on the default 17-inchers to 133g/km. Hardly a deal-breaker.

The four-cylinder in-line turbodiesel is pleasingly strong and responsive and makes this fairly big (4.6 metres nose to tail) and luxuriously equipped drop-top quicker than you'd expect, and it zips along whenever you feel inclined to make full use of the gears. It's a nice manual gearbox too, with ratios in tune with the power to hand, and makes parlaying the meaningful 295lb ft of torque into decent pace almost as easy as driving an auto.

Pick-up in the top gears is strong on the motorway — leave the stick where it is and just squeeze the right pedal. Block shifts up and down are polished — in fact, they're actively encouraged with 3rd to 5th and 4th to sixth prompts regularly appearing in the driver's information display between the main dials.

Top down, this A5 Cabriolet's ambiance insulates you from the rat-race; you'll surf along at your own pace, cool and composed, the lightest of breezes ruffling your hair, barely aware of the muted four-pot murmur from beneath the clean-cut bonnet.

Talking of the soft-top; dropping the roof takes just fifteen electric seconds. And you'll waste very little time slipping the windblocker out of its tailored case in the boot. Once fitted in place you can, if you're travelling ŕ deux, leave it there indefinitely as it covers the rear seating area, which is still easily accessible by tilting the front backrests forwards.

If you then flip up the vertical windblocker section for maximum protection you can still raise or lower the roof and even, top up, drive with it in place as the mesh is easily seen through, so rear visibility is not compromised in the least. On a balmy day, top-down in an A5 Cabriolet is definitely an ideal place to be. Especially two-up, when the optional wind deflector really does block the wind, ensuring the cabin remains enjoyably civilised even at the legal limit.

Raised, the extra-insulated standard-fit acoustic roof keeps out external sounds including any wind roar and provides the Cabriolet with virtually the same level of refinement as you'd find inside the metal-roofed A5 Coupe. Also handy is the separate switch that opens/closes all four windows together.

It goes without saying that kids will love swanning around, top-down, in the rear cabin — thanks to knee room maximised by hollowed-out front seatbacks and decent foot room, so too will a pair of adults. The magazine pockets, storage bin under the offside outer armrest and triple cupholders between the 50:50-split rear seats will also be appreciated. Better still, rear passengers can simply press a switch to power-slide the front seats forward before exiting.

But is it a true four-seater? Yes because an average-sized adult can travel okay behind another of a similar size and not feel at all hemmed-in when the roof's up. And if you're riding in the back you don't have to put the roof down for ventilation because the rear cabin has its own air vents and temperature control, while for colder months there's three-stage heated seats (actually these are a Ł200 option but only a skinflint wouldn't tick the box). Adding to the pleasure of cruising in the Cabrio — wherever you sit — is the fact that fit and finish is first-rate; top down you won't hear a single squeak, rattle or groan, even over poorer blacktop.

Audi's legendary quattro all-wheel drive will be a choice A5 driver's keen to set a pace will need to make. That said, the 2.0 TDI comes with front-wheel drive as standard — and it's perfectly fine. Roof up or down, the A5's handling is reassuringly well balanced with more than enough grip and composed agility from the chassis (S line versions come with Sports suspension) to engage drivers who need to press on. If there's any penalty ride-wise with the larger wheels that define S line models it's barely noticeable.

Informed drivers know that in the dynamics equation a car's steering is as important as the chassis — and the A5's direct steering contributes strongly to the 2.0-litre TDI's deft handling.

Once you've seen the Cabrio's fabric roof fold neatly away and totally disappear under the rear deck panel you might think 'Oh well, there goes the luggage space'. Actually, No. Within the boot there's a dedicated storage well for the soft-top that, roof down, leaves 320 litres available for your cases.

Better still, with the roof up you can easily collapse the well with a gentle push of your hand to free up another 60 litres, making for a family-hatch-sized 380-litre boot (incidentally, the well conveniently drops back down automatically the next time you retract the roof, so long as there's nothing in the way).

And the Cabrio still has a final space-making trick up its sleeve: pull the levers in the boot and the 50:50-split rear backrests drop down under their own steam to reveal a large load-through that boosts load space to 750 litres.

A key part of the A5 Cabriolet's appeal is its four adult-sized seats, the easy access to the rear cabin (and any child seats fitted there) plus its versatile boot that together make it a family-friendly proposition. Inside the Cabrio — and as Audi buyers now take absolutely for granted in any and all of the marque's models — there's the unmistakable 'four-rings' premium brand quality featuring a plush, finely furnished interior enhanced by fine Nappa leather upholstery.

The fascia is pleasing to the eye and the switchgear intuitive to use; you feel totally at home the moment you get behind the flat-bottomed, three-spoke, multifunction (voice, repeat last navigation direction, audio, etc) wheel with its good-to-grip perforated leather rim. Setting a first class driving position takes but seconds and once done you can store it: the two-memory seat recall function makes sharing the driving with your partner an easy option.

As you settle in either of the shapely, supportive and well padded 'S line'-embossed Sports-style front seats, a 'belt butler' comes over your shoulder to hand you your belt. The seats are all-electric, even the extending under-knee front cushion, as too is the lumbar support that can also be powered up and down to physically hit the spot. Another plus: with the roof in place there's a full fist of room between the top of your head and the meticulously trimmed headlining.

The good life continues with a foolproof SatNav that never nags, just provides explicit prompts as to the way to go, crystal clear instrumentation (with stylish tear-shaped dials) and driver information (graphic navigation prompts along with essentials such as digital speed and range).

There are more 'goodies' including a digital radio, a ten-speaker sound system, drive-away auto locking, auto-dimming rearview mirror, auto lights and wipes, on-demand powerfold door mirrors (that also park themselves on locking and leaving), front and rear parking sensors, cruise control, an easy-peasy electric parking brake with an auto function that's a boon in heavy stop-start traffic plus a very efficient three-zone climate control system that's just as effective with the roof down.

Organisationally, the glovebox has plenty of room for all that unavoidable personal 'stuff' and there are some pretty useful out-of-sight storage bins built into each of the front seat bases plus enough cupholders for all four occupants to enjoy a latte macchiato al fresco — or, if coffee's not your poison, the long front doors bins will each hold a bottle.

You could say an A5 Cabrio is all the drop-top you'll ever really need. Certainly in mid-range 2.0 TDI guise it's comfortable and refined, has a decent turn of speed in keeping with its looks, and makes a gallon of fuel go a surprisingly long way. As well as being great to look at, it's also satisfying to own and pleasurably entertaining to drive. So… all you really need! ~ MotorBar