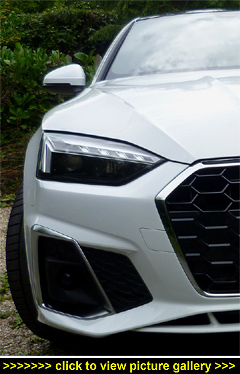 “Like a jewel within a jewel, the A5
Coupe’s dashing bodyshell is
wrapped around a stunningly svelte
cabin; better still, it’s packed with
smart tech, seats four and can
swallow a household’s luggage.
Oh, and it drives splendidly!”

THE SPORTY LOOKS are unquestionably GT-like but the real pleasure of driving one is in savouring its laid-back grand touring nature — in an A5 Coupe you really don't need to stamp the pedal at every gap in the traffic to make it clear you've arrived. That's not to say it doesn't go — top speed is 150mph and 0-62mph is done and dusted in 7.3 seconds.

Settle into either of the leather-and-Alcantara-clad front seats and feel the premium materials; run your fingertips over the brushed matt aluminium finishings; finally, savour the cabin's understated style and the sheer uncomplicated functionality of it all. Living with this bona-fide premium cabin on a daily basis is a real delight.

The contoured bolstering of the sports-style chairs provide a bespoke feel along with first-rate location. Further enhancing comfort are seat base cushions that can be extended for additional under-knee support; there's also powered four-way lumbar adjustment and for good measure a seatbelt butler that 'hands' you your belt when you first climb aboard.

The result is extremely comfortable seats however far you're driving, but especially so on extended journeys. More good news: the central tunnel is quite wide which benefits the long tray beneath the sliding and height-adjustable centre armrest as well as providing plenty of elbow space between front seat users.

Naturally the driving position is spot-on and offers a clear view down the bonnet; and despite the sloping rear screen you can, if you prefer, reverse without using the rearview camera and its active grid, confidently putting your faith in the standard-fit front and rear parking sensors instead.

Other much appreciated features include a powered panoramic tilt-and-slide glass sunroof with one-shot-op and an opaque black mesh sunblind (also one-shot) and frameless front windows — handy when parked in a tight bay and you need to 'snake' yourself out! The dash is slimline and minimalist, with a 10-inch 'floating' touchscreen mounted dead centre of the fascia.

The A5's comms are as usable as they are sophisticated. The eye-catching central display has first-class graphics and fast responding menus — par for the course for Audi's slick and much-admired MMI infotainment system. Full-spec SatNav is part of the package. Also impressive is Audi's brilliant virtual cockpit that places an all-singing-all-dancing digital instrument panel immediately ahead of the driver.

The customisable 12.3-inch driver's display offers a number of view choices with snazzy trad-look dials (large or small; your choice) either side of the centre ground that can show active 3D mapping or various driver-selected infotainment functions — should you prefer, you can use the maximum width for the live mapping with smaller size dials at each end for über-easy navigation. And all done with a quick press of the 'view' button on the multifunction steering wheel — our press car sported one of the optional flat-bottomed three-spoke sports wheels with a fab perforated leather rim that's as rewarding to use as it is to look at and that's easilly worth ever penny of the extra Ł125 it costs.

Another big plus point are the controls for the multi-zone climate system: they're separate from the touchscreen and the beautifully crafted and touch-sensitive switches are far easier to use on the move than having to tap at a screen. Brilliant, too, is the foolproof head-up display that puts the road speed, posted speed limit and graphic navigation prompts squarely in your eyeline.

For the record, the posted speed limit is displayed adjacent to the large digital road speed readout in the instrument panel window so even if you decide to forgo the optional (Ł1,025) head-up feature you'll still be fully informed.

What you will want to see on-screen is Apple CarPlay and Android Auto for your mobile; these you get along with Bluetooth hands-free, a digital radio, decent sound system, Audi Phone Box (creates an additional Bluetooth interface so two mobile phones can be connected to the vehicle simultaneously) and WiFi smartphone charging.

For emergencies there's an SOS button to summon help plus there are plenty of USB ports both front and rear including the charging kind. High-tech aside, it's good to find plenty of in-cabin stowage space — something irritatingly lacking in too many of today's cars.

Kit-wise the S line is well specced with — in addition to all the other items mentioned throughout the review — Keyless Go, three-zone climate control, privacy glass, cruise with speed limiter, frameless auto-dimming rearview mirror, heated and auto-dimming powerfolding door mirrors (on demand and automatically on locking and leaving), one-shot powered front windows, 19-inch alloys, and those oh-so-cool scrolling indicators at the nose and tail.

Underscored by a maximum Euro NCAP five-star safety rating, the A5 is not only crash-safe but comes with that all-important automatic emergency braking system. Naturally there's a full suite of airbags, powerful Audi Matrix LED headlights with LED tail lights, automatic drive-away door locking, and auto lights and wipes.

Mild hybrids are trending strongly and look set to become a popular power choice as the countdown begins to a brave new all-electric automotive world (officially by 2030). Audi are already deploying the tech and the A5 Coupe is a fully signed-up member of the 'mybrid' club, using a belt-driven alternator to harvest energy under braking which is then used to boost efficiency and increase fuel economy. It's quite likely you'll never be aware the mild hybrid is there, working away in the background — unless you fully lift off the accelerator at cruising speeds, when the system stealthily cuts the engine and switches to electric power to save fuel.

The turbocharged and direct-injected 2.0-litre lightweight four-pot nestling in the A5's engine bay pumps out 187bhp along with a muscular 236lb ft of torque — and it's more than punchy enough to honour the Coupe's sporty image. It's also impressively smooth with a quick-shifting dual-clutch autobox, getting off the line to hit the benchmark 62mph in a very purposeful 7.3 seconds. National limits permitting, it will run all the way to 150mph.

And whenever you want to ratchet-up the pace you can tap the selector lever back to instantly flick from Drive to Sport; or use the paddle-shifters on the wheel for full shift-change control over the seven speed S tronic autobox. Select Dynamic mode (one of five driving profiles) from the Drive Select menu and you can indulge the seamless power-like delivery to your heart's content. However, as swift as it is, this A5 goes easy on the gas — officially 40.4mpg is claimed; a week's hard driving over a mix of roads in a variety of real-life traffic conditions saw us record a test average of 41.7mpg. No complaints with that!

At almost fifteen-and-a-half feet long (4,697mm) this is a big coupe and despite the front two seats bagging the bulk of the room there's still space to appease a pair of adults in the rear. True to form, as with any four-seat two-door coupe, the best seats are closest to the doors — but anyone contemplating one will not be unduly troubled by this. After all, even when buying a bog-standard saloon you don't prioritise passengers' comfort over your own.

That said, the A5 actually does offer real comfort to grown-ups consigned to its rear seats — rear legroom and headroom are not bad at all given the dipping coupe roofline; there's decent foot-room too and average sized adults ensconced in the scalloped rear seats will feel well accommodated and happy to travel 100+ miles with no complaints.

That said, two individual chairs and two belts makes it obvious that the A5 Coupe is a non-negotiable four-seater. The rear windows are fixed, but that's not a problem thanks to a dedicated control panel to set the rear cabin's temperature separate of the front. A pair of charging USB ports is also welcome, as too is the wide and well-padded centre armrest with built-in pop-out cupholders. Net seatback pouches and long door bins take care of any oddments plus there are bottle/cupholders at the front outer corners of both seat bases.

Our S line press car rolled on smart 19-inch V-spoke alloy wheels smartly finished in graphite metallic and shod with low-pro Hankook 255/35 rubber. S line models come with a sporty lowered suspension and, if you like to soften or stiffen the dampers at the press of a button, adaptive dampers are an option.

That noted, the standard-fit 'sport' suspension serves up an assured ride that's a sensible compromise between ride and handling. We'd leave it all as it stands because on its 'stock' underpinnings the S line has the ability, boosted by its favourable cabin refinement, to make even coast-to-coast journeys feel like you've just popped out for a local takeaway. Few cars can honestly manage that.

The A5 Coupe is also a 'good steer' — the steering is precise and feels nicely weighted at all speeds, and combined with ever-predictable front-wheel drive, well-managed body control and a sure-footed and well-balanced chassis, the A5 Coupe's on-road dynamics can be enjoyed without any drama — even when zig-zagging through the lanes. Its GT-esque forte is getting you from A to B as unhurriedly or as swiftly as you desire; but always with a seamless sense of panache.

If you're drawn to the A5 Coupe because of its looks — and who wouldn't be? — you could easily forget to check out its boot. No worries because at 450 litres it's reassuringly big (among the best in class). And not just for the weekly shop — it will also swallow four people's luggage. And when the rear seats are not cosseting passengers, their versatile 40:20:40-split backrests add an unexpected but very useful extra dimension.

Folded down (just pull all three levers in the boot) they open up a proper loadbay for 'touring-mode' luggage, flatpack furniture or even quite lengthy cargo. More positives: the load sill is low and the boot-lid lifts high, flipping back over the rear screen to make loading quick and hassle-free. Along with enough stretchy luggage nets to immobilise Houdini, other neat touches include a pull-down twin bag holder; it's even damped — now that's attention to detail!

A compelling number, this face-lifted for 2020 A5 Coupe serves up grand touring style plus unabashed comfort with a refined premium ambiance. And it keeps on giving with a smooth and powerful mild-hybrid engine that's pleasingly economical. Like Chanel's classic perfume, Audi's own 'No 5' exudes the sweet smell of success. ~ MotorBar