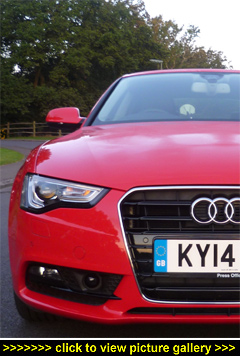 “It’s not just the A5’s slinky coupe
body that’s low; so too are its CO2
emissions — and at 109g/km that’s
what earns this new low-emissions
eco-diesel its ‘Ultra’ badging...”

THE MAIN DIFFERENCE between Audi's previous range of low-polluting TDIe (note that small 'e') models and these new Ultras is that the Ultra's gearbox is fitted with taller, more economy-friendly ratios; specifically to benefit fuel consumption when running in fourth, fifth or sixth.

And it works — the official combined cycle figure is 67.3mpg (56.5 Town and 74.3mpg Touring). The good news is that there's no hidden penalty to pay in terms of driving performance: zero to 62mph is despatched in a crisp 8.3 seconds and the top speed is still twice the UK's legal limit at 140mph.

The 2.0-litre TDI in the Ultra's engine bay pushes out 160bhp backed by a muscular 295lb ft of torque between 1,750 and 2,750rpm. The four-pot unit is refined and serves up punchy acceleration off the mark — response-wise it feels somehow closer to a petrol engine.

Rather than pure revs, the TDI's smoothly-thrusting wave of torque is the driving force here — match it to the right gear and all thoughts of economy are forgotten as you use the slick-changing manual 'box to keep it game on. Acceleration off the mark is punchy. While sixth is obviously best for motorway cruising, fourth can be unexpectedly feisty on B-roads.

All of which makes the A5 Coupe Ultra a relaxed driver as well as a favourably economical one: a hard week behind the A5's sporty-looking wheel turned up a very credible test average of 57.5mpg. And, to be sure, this Coupe is not a small car!

The Coupe's clean-cut, classy — and almost timeless — lines make it not just handsome but engagingly so. Finished in the gleaming Brilliant Red paintwork of our test car it doesn't just look fetching, it looks downright seductive.

And its two doors will readily admit four adults into a typically dishy Audi cabin, where you'll find plenty more to admire while sitting comfortably and well supported in quick-to-warm, three-stage heated, fine Nappa leather-covered seats. Whichever side you sit in the front, you'll enjoy ample headroom and plenty of shoulder room plus loads of space to stretch out your legs and waggle your feet around.

With it's well-considered blend of satin-chrome trim, upmarket materials and switchgear that feels 'engineered', it's a cabin that easily takes on all-comers in the ambience stakes — and a fine place in which to spend time even when you're just parked up.

The Coupe's SatNav makes a totally trustworthy companion. Not only is the 3D mapping brilliantly legible with auto-zoom for intersections and posted speed limits clearly shown, but the spoken commands really do keep you informed. For example: "Stay on this road for twelve miles. Warning: two miles of slow moving traffic". Now that's what we call helpful!

Add to this an easily-seen graphic countdown to junctions in the driver's info display and you'll never fall out with your guide. At 6.5 inches the colour screen is not one of the largest but it most definitely has one of the nicest and most user-friendly route displays we've come across. For the record, the on-board computer provides plenty of pertinent information including a digital speed readout in large white numerals.

The instrumentation is unmistakably Audi with a pair of beautifully-crafted, teardrop-style main dials edged with slim satin-chrome bezels for speed and revs, and with smaller gauges inset for fuel and engine coolant temperature. Again, large crisp white digits make for 100% clarity.

It covers everything from navigation to media and driver voice commands and really is idiot-proof to use as well as for setting personalised settings; for instance, whether the door mirrors self-fold on locking and leaving, or adjusting the headlight beam patterns to suit driving on the 'wrong' side of the road.

It's also an easy cabin to keep tidy thanks to plenty of storage space that ranges from the accommodating glovebox (made better by the dedicated pockets for a mobile phone or player), large bottle-holding door pockets, drop-down glasses case, and siamesed cupholders-cum-open bins to the lockers built into the leading edges of both front seats and the good-sized box beneath the adjustable (for height and length) front centre armrest.

There are plenty of driver-friendly aids too, such as active Lane Assist and Main Beam Assist but undoubtedly the most used will be the electro-mechanical parking brake. This is backstopped by Audi's Hold Assist which automatically engages the brake when you stop with the engine running — it's a great help in stop-start traffic and pulling away on hills (up or down).

On the move the cabin is quiet and soothing to the senses. One could — and indeed can — travel long distances coccooned in its relaxing ambience. The driving position is spot-on and it's easy to gauge the edges of the front-end — unexpected given the low-slung stance the coupe presents to the world.

With a fluent gearchange action that's consistent for both fast and slow shifts (sequential or block), nicely weighted and accurate electromechanical steering (with speed-dependent power assistance), plenty of grip and faithful handling dynamics, there's pleasure to be had on both winding and invitingly open B-roads

What helps is that the Ultra-spec A5 Coupe is underpinned by a sports suspension set-up. However, in this case it's intended primarily to reduce economy-damaging aerodynamic drag by smoothing out the airflow under the Coupe. Which it does very effectively without derailing the ride quality — in fact the Ultra rides with a suppleness that contributes greatly to its overall long distance credentials.

The A5 is a real-world coupe. You might not expect to put adults in the Coupe's back seats but you can; they're big and shapely enough, and with seat bases that rise up at the front edge they keep occupants well located. Comfy outer armrests complement a wide, drop-down centre armrest. Headroom for the average adult is on the plus side of 'hair-brushing'.

Foot-room is plentiful and there are magazine pockets on the front seatbacks as well as dedicated air vents with temperature selection and pop-out cupholders built into the armrest plus a storage compartment under the padded lid that's home to a first aid kit.

The sloping roofline is not so noticeable from inside the rear cabin, which is light and airy. Access, incidentally, is straightforward thanks to front seats that tilt and slide out of the way and then always return to their exact prior positions.

The Coupe's bootlid springs open high, so loading and unloading is as easy as can be. With the 60:40-split rear seats in use there's plenty of room for luggage: 455 litres. Usefully the rear seatbacks fold down to transform this into a very handy 829-litre loadbay; more than you may have been expecting from such a shapely coupe. Better still, the folded seatbacks create an even load floor.

Attention has also been paid to the rear seatbelts, which stay out of the way when dropping/raising the rear seatbacks. And neither have everyday shopping essentials such as bag-holders been forgotten — there are two drop-down holders, each designed to retain two bags. And a stretchy mesh luggage net keeps loaded items exactly where you left them.

Style and ultra-low running costs, that's what Audi's real-world A5 Coupe is all about. It's an enjoyable combination, served up in a way that its premium German rivals BMW and Mercedes-Benz cannot quite match. So go ahead, make your year! — MotorBar