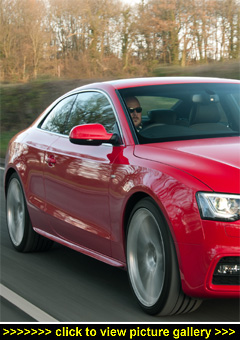 “Audi’s classy two-door, four-seater
A5 Coupe has just had its first
update — and all the more spiffing
it looks as a result...”

THE NEW STYLING CHANGES — and very subtle they are, to be sure — have cascaded down from the fine Audi A6/A8 ranges and include a refined grille, new bumpers, bonnet and lights. Nothing too stand-out, so current owners need not worry that their 2011 model year cars will be outdated overnight.

Cabin improvements include new colour schemes and trims, revised switchgear and new online services options (Google Earth mapping and in-car internet access). Audi's Multi Media Interface system, which allows drivers to scroll through on-screen menus using a rotary dial and buttons, has been refined; there are now less buttons and it's simpler and more logical to use.

Amongst the most significant engine changes is the new 268bhp version of Audi's supercharged 3.0-litre TFSI petrol unit which replaces the 3.2 FSI in both Coupe and Cabriolet versions. The V8 powerplant in the S5 Coupe has also been replaced with the existing 328bhp engine powering S5 Sportback and S5 Cabriolet versions.

Apart from rear seat legroom, the A5/S5's biggest problem is the competition — specifically BMW's 3 Series, the benchmark in this sector. The new, and reportedly even better, 3 Series is due to come to market early in 2012.

For the record, the Mercedes C-Class is also a strong contender in this premium brand sector.

I recently got behind the wheel of the revised 208bhp A5 Coupe 2.0 TFSI quattro S line, with S tronic auto transmission. For private retail customers and businessmen (and women!) who pay for their own car of choice and drive less miles each year, the 208bhp four-cylinder turbocharged petrol unit makes most sense — and with the S tronic auto 'box plus quattro drive it makes a well-rounded package.

But it's not cheap; Ł36,515 on the road, to be precise. But it does offer utter driving refinement along with a good turn of speed and very capable handling allied to acceptable ride comfort.

The new generation TFSI (direct injection turbocharged) petrol engine delivers 258lb ft of torque from just 1,500rpm and is very responsive at both low and high speeds. Top speed is more than double the legal limit — 152mph. Nought to 62mph acceleration takes an impressive 6.5 seconds. Remember, this is all from just a 2.0-litre engine.

Adding to the enjoyment, the quattro all-wheel drive provides maximum cornering grip, ensuring the A5 remains well balanced on both the straight and narrow and through fast bends.

And with our poor roads and wintry conditions of rain, ice, and snow, it's reassuring to know that the quattro delivers safely and surely in all weathers.

Officially, the Combined Cycle fuel consumption is 40.4mpg. However, during my short test drive on A and B roads, I couldn't get close to that — driven at reasonable (and legal!) speeds, the A5 returned a disappointing 25.4mpg. With CO2 emissions at a relatively low 159g/km (given the power and the quattro drive), the first year road tax is a not unreasonable Ł165.

Against? Pricey, and the real-life fuel economy does not come close to the official figures.

What is undeniable is that, for the money, you get a classy two-door, four-seater Coupe that's refined and relaxing to drive thanks to a smooth auto transmission and very responsive petrol engine. — David Miles